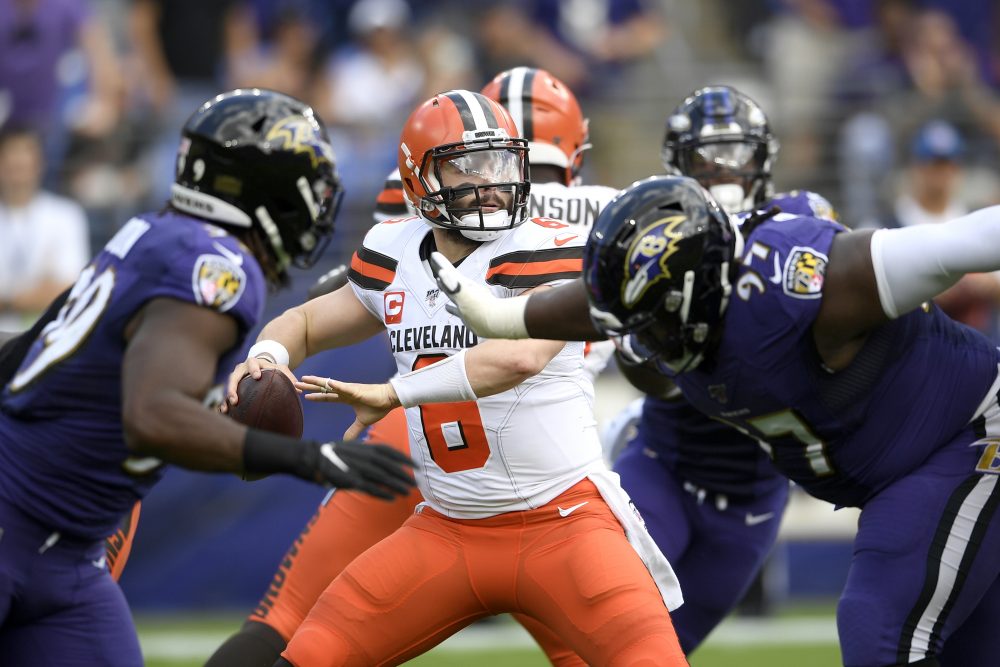 For three games, the search came up empty. The efficient, explosive offense was lost in a pile of penalties, wayward passes and suspect play calls.

Then it clicked. In Baltimore. At the perfect time.

The solution was bigger than quarterback Baker Mayfield playing better. It came on a philosophical level.

“Offensively we kind of found our identity, but we are definitely not satisfied,” Mayfield said. “I would not say that we are right where we want to be. We have to continue to get better. The best part about this team is it continues to focus on the next opportunity to get better.”

That comes Monday night in the Bay Area against the 49ers (3-0). The Browns hope they turned a corner with the 40-25 win over the Ravens that left them atop the AFC North, but the rugged stretch of the schedule continues for three more games and any letdown or regression will likely result in a loss.

The optimism for the Browns (2-2) stems from a complete performance that put up 530 yards against a usually stingy Ravens defense. Mayfield threw for 342 yards and a touchdown, and Nick Chubb rushed for 165 yards and three touchdowns.

Mayfield is confident the offense, which averaged 16.3 points through three games, will be able to maintain its newfound identity.

“Absolutely. I think we set the standard in how we have success,” said Mayfield, who has the chance to throw for 300 yards in back-to-back games for the first time. “You talk about football, it starts up front with the offensive line and getting the run game going. That allows the receivers to have open lanes and play-action.

“Anytime you can give Nick Chubb the ball like that, he is going to make a lot of plays. We have set the standard on what we need to do and how I need to play.”

Mayfield doesn’t give up things easily to the media, so there was a back-and-forth about what exactly is the identity of the offense.

How about a little more?

“Everybody doing their job,” he said. “Everybody did their job, and that needs to be our identity. To have success, everybody has to do their 1/11th. Going out there and being focused.”

Mayfield was much better at his job. He went from completing 57 percent of his passes to 67 percent and set a season high in yardage. More importantly, he showed the pocket presence that was so impressive during his rookie year.

Perhaps it’s a chicken-and-egg argument, but he trusted the line to protect him and was repaid by being sacked only once — on the first drive — and not hit again, according to the official stats.

“When they are blocking like that and I can be comfortable in the pocket and I am doing my job, it makes my life easier,” Mayfield said.

“From our perspective, we’ve got to give him that trust,” left guard Joel Bitonio said. “If he doesn’t trust us, which we never lost faith in that, but if he didn’t we had to make sure we’re protecting him as long as we can so he can make those plays happen.”

Mayfield bailing out to his right was a troubling trend in the first three games. Getting him to stop was a team effort.

“We protected better. We ran the ball better, so that added to it. He did a better job of staying in there,” coordinator Todd Monken said. “Some it was he could probably do a little bit better of a job, and we could certainly do a much better job around him.”

He needs to see the offense play that well again to be confident an identity was found.

“I hope so. Hopefully we are headed down the road of consistency of what you see on film is stacking plays together that give us a chance,” Monken said. “I did feel like that we had a good plan for them and we had an excellent chance of executing, which we did.”

The key for Monken was fewer “wasted plays.”

“We had fewer plays where we just did not force the defense to execute,” he said. “Half the battle is having it what you want it to look like, how you had it planned and then the guys taking it to the field.

“I thought our guys just kept plugging away. We ended up with a number of explosive plays and that is a part of it. It looked like what we wanted it to look like.”

The 49ers will test the offensive line and Mayfield’s trust in it with a defensive line loaded with first-round draft picks.

Rookie end Nick Bosa is the latest, taken No. 2 out of Ohio State. He’s been slowed by a preseason ankle injury but is healthy again and has a sack and a tackle for loss.

“They let them play. They are similar to the Rams to where they do not have to pressure as much just because they are trusting those guys to get home because of how talented they are,” Mayfield said. “It allows the rest of their defense to play free.”

Mayfield must be aware of the potential for batted balls with the height of San Francisco’s front, as Buckner and Armstead stand 6-foot-7.

“They have been able to get their hands up and get balls on the ground,” Monken said. “So that is a part of it, plus they have done a nice job of winning their one-on-one matchups at times. They put Armstead inside, which will be a challenge for our guards.

“It will be a real challenge for us, not only their athleticism but their length.”

Receiver Odell Beckham Jr. thought Mayfield looked more comfortable against the Ravens and attributed the improvement to the critics, led by ESPN’s Rex Ryan, taking shots at him.

“I would just encourage everyone who talks about Baker in the media to keep antagonizing him,” Beckham said. “Keep making him mad, because that’s what you’re going to get. This is somebody who’s been fueled off of that all his life. And the more you poke fun at him, the more he’s going to poke back.

“So I just love to see him in his element and just being him.”

Odell Beckham Jr. says he’s come “a long way” because he didn’t retaliate against Baltimore’s Marlon Humphrey, avoided suspension
Browns feel they have “lot of momentum” but need to beat 49ers on Monday night, stack wins to keep it going