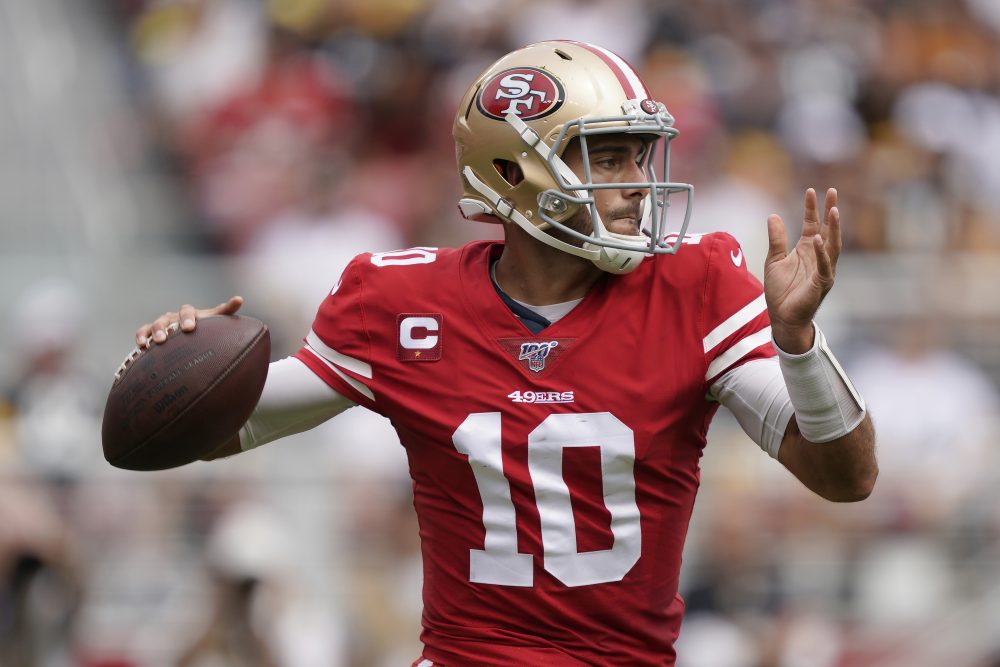 Quarterback Jimmy Garoppolo was stuck behind Tom Brady in New England. Then he tore an anterior cruciate ligament last season with San Francisco, cutting short his first full season as a starter after only three games. Garoppolo is back this season and has continued his impressive play when he’s been able to get on the field. The 49ers are 3-0 as Garoppolo has improved to 11-2 as a starter in his career — the .846 winning percentage is best among active quarterbacks with at least 10 starts.

“He looks like he is back to 100 percent and making good throws,” Browns coach Freddie Kitchens said. “Making good decisions. He is a very good quarterback.”

“The one thing I will say is he does not force things in there,” defensive coordinator Steve Wilks said. “He is really smart with the ball and knows exactly when to check it down and when to force it down the field. He is playing well right now.”

Garoppolo, who was traded from the Patriots to the 49ers during the 2017 season, has a strong, accurate arm and enough athleticism to extend plays. He’s completed 58 of 84 passes (69 percent) for 739 yards, five touchdowns, four interceptions and a 96.3 rating this year.

The Browns tried to trade for Garoppolo, but the Patriots sent him to the NFC. Niners coach Kyle Shanahan was the grateful recipient. His play-action-heavy offense is designed to make life easier on a quarterback, and Garoppolo has been the latest beneficiary. The sample size is small, but he looks like a playoff-caliber quarterback.

“Each week he gets better and better,” Shanahan said. “It is definitely not the finished product. When you come from an ACL, you miss a lot of football. Before that, he had not played a lot of football, either. He has come back looking real healthy in camp, but when you are healthy, it still takes a lot of time to get your rhythm back.”

Cleveland’s offensive line quieted the critics with its performance last week against the Ravens, as Baker Mayfield was sacked only once and Nick Chubb rushed for 165 yards and three touchdowns. The silence will be temporary if the line can’t duplicate its effort against a 49ers front much more talented than its counterpart in Baltimore.

“The cool thing about them is they play hard,” left guard Joel Bitonio said of the 49ers. “For guys that were high picks and guys that have done stuff in this league, they’re always playing hard and that’s something you’ve got to try and combat.”

The Niners have five first-round picks on the defensive line — only four play at a time — which kept the attention of the Browns all week. DeForest Buckner, Arik Armstead and Dee Ford have two sacks apiece, Solomon Thomas has one and rookie Nick Bosa, the No. 2 pick out of Ohio State, has one. Buckner and Armstead slide inside on passing downs, giving the 49ers four pass-rush threats, including a pair of 6-foot-7 trees in the middle. The Browns believe it’s the best front they’ve faced this year.

The length of the 49ers means Mayfield must be careful of batted balls at the line of scrimmage. His linemen will try to do their part.

“It’ll be a battle, but we have a good plan in,” center JC Tretter said. “We’ve been working on different things to combat their length. Sometimes you can’t really stop it if they time it up and get their hands up. Just being aware of it and trying to engage. Instead of letting them stand at the line of scrimmage and get their hands up, drive on them and make them have to get their balance back before they can jump up there.”

The 49ers offense should look familiar to Browns fans because Shanahan ran the same system here in 2014. He is devoted to the run game, building everything off the outside zone scheme taught to him by his dad, Mike. The linemen move in unison toward the sideline and the running back looks for a seam, makes one cut and heads upfield. Shanahan won’t abandon the run even if the 49ers are trailing, so he keeps the defense honest at all times.

“The way they run, it is effective,” defensive tackle Sheldon Richardson said. “Great running backs. The guys are really downhill and know how to press the gaps really well. We have to stay disciplined and do our job.”

The Browns rank 21st against the run, allowing 119.8 yards, but held the Rams to 90 yards a couple of weeks ago against a similar system. The 49ers rank second in the league with 175.0 rushing yards and are the only team with two backs with 200 yards, Matt Breida (226, 5.5 average) and Raheem Mostert (202, 5.9). They could also have back Tevin Coleman, who’s been out with an ankle injury.

The backs are just the start of it. The commitment to, and success of, the run game blends perfectly with the play-action passing game. By putting Garoppolo on the move and forcing the defense to respect the run, Shanahan consistently gets receiving targets running free. The 49ers are third with 32.0 points a game and tied for fourth with 31 big plays (10-yard runs, 20-yard passes) through three games.

“They are all about trying to create edges on the defense so it is very important that we do a great job of penetrating up front, trying to set the edge and doing a great job of setting the perimeter coming up to try and support the football,” said Wilks, who faced Shanahan twice last year as head coach of the Cardinals.

The Browns’ best counter will be a big game from ends Myles Garrett and Olivier Vernon. If they set a firm edge against the run, they will short-circuit much of what the Niners want to do. That would then allow them to go after Garoppolo and suspect rookie left tackle Justin Skule, who will start only his second game in place of the injured Joe Staley.

“They are all game-changers,” Shanahan said of the Browns defensive linemen. “They are a scary defense to go against. It is a huge challenge. I know they are doing good, and I have a strong feeling they are only going to get better throughout the year.”

TWO CAN PLAY THAT GAME

Chubb has been the Browns MVP through four games. He’s fourth in the NFL with 398 rushing yards, and has four touchdowns and a 5.1 average, allowing Kitchens to rely on him as Mayfield and the passing game work through their early struggles. Chubb was at his best against the Ravens, going for 165 yards and three second-half touchdowns, including electrifying 14- and 88-yarders.

“It is quite a luxury to have a running back that gives you comfort that you can turn it around and Nick is going to get you positive yards,” coordinator Todd Monken said. “Obviously Nick is faster than most people give him credit. To be able to finish runs, he has done it now back-to-back years with not just long runs but ones that you do not see every week. When we are going right, he is going to touch the ball a lot.”

The 49ers present a challenge for Chubb and the offensive line that had its best game in Baltimore. The 49ers rank fifth in rushing defense, allowing 75.0 yards a game, and they’re the only team that hasn’t allowed a rushing score. Not only is the front four imposing, but linebackers Kwon Alexander and Fred Warner are playmakers.

“Listen, the game of football, you can make it as complicated as you want, but I like to simplify things,” Kitchens said. “It is about running the ball, stopping the run and taking the ball away more than they get it from you.”

“One of the best tight ends in the league,” Randall said. “Run after catch is the main thing, very, very athletic.”

The 49ers recognized the potential in Kittle and were thrilled to get him in the fifth round of the draft. Shanahan’s scheme allows tight ends to operate in space and Kittle has excelled.

“I would like to say we developed him, but he was a freak right when he got here,” Shanahan said. “I do not know how he was available in the fifth round. Last year, he was able to stay healthy for all 16 games. I think that is why everyone found out about him.”

The Browns have struggled to cover tight ends in recent years but have upgraded the personnel and did a good job against the Ravens’ talented group. Linebackers Joe Schobert and rookie Mack Wilson will be tested by Kittle and the play-action offense, as will the quartet of safeties Wilks uses. Randall, Jermaine Whitehead, Morgan Burnett and Eric Murray will likely find themselves matched up with Kittle and need to limit the damage.

“He does a tremendous job making guys miss out in space and can take the top off,” Wilks said. “It is very difficult because he poses the elements just like a receiver once you put him out in space.”

Rushing touchdown allowed by the Browns through four games

Years since the 49ers started 4-0, which they can do with a win against the Browns

Career catches by Browns receiver Jarvis Landry, fourth in the NFL since he entered in 2014