Analysis: Momentum from win over Baltimore only a mirage, as Browns are left searching for answers after another embarrassing loss 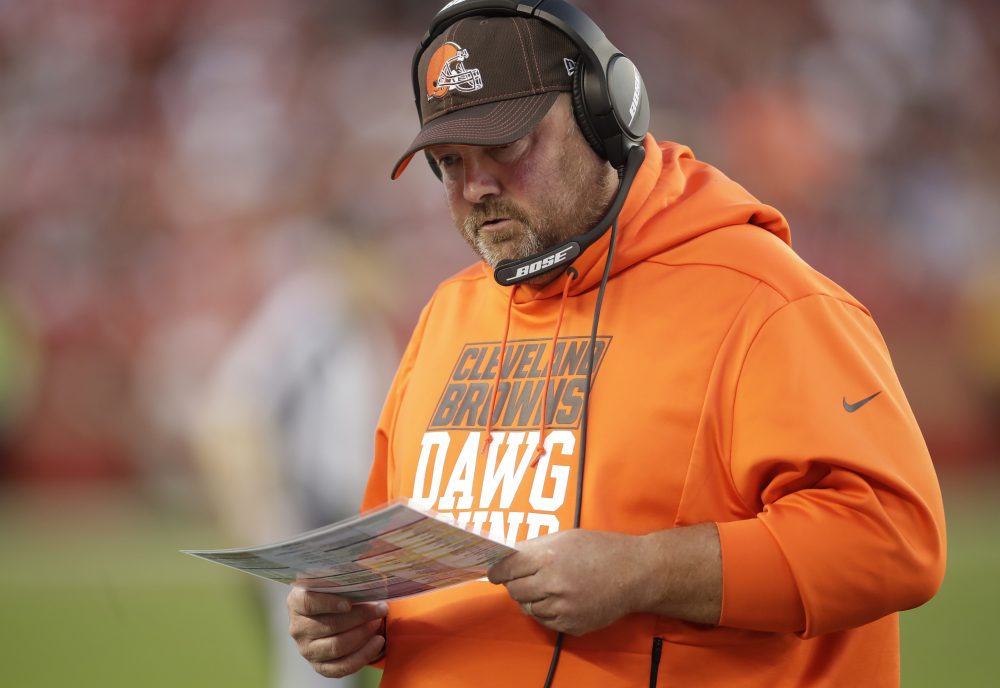 So much for momentum.

If the Browns turned the corner with the win at Baltimore — like many thought — the 31-3 loss to the 49ers on Monday night was a 50-car pileup waiting around the bend.

If they had found their offensive identity — like they claimed — they quickly returned to the missing persons list.

The only thing we know for sure about the Browns through five games is that their play has matched their talent one time, against the Ravens on Sept. 29.

While the Browns use that impressive victory as the example of their potential, it remains the outlier. In the other four games, the Browns have been embarrassed twice, beat the depleted Jets and lost a close one to the solid but struggling Rams.

The Monday night matchup with the 49ers was the chance for the Browns to prove the win over the Ravens was the new reality, not a mirage. Instead, with the football world watching, they regressed and deleted any positive conclusions.

Coach Freddie Kitchens continues to leave himself open to doubts of whether he’s qualified for the job. San Francisco counterpart Kyle Shanahan used the bye week to construct the perfect plan, and Kitchens had no answers.

He prides himself on the Browns being the more physical team, yet they were dominated at the line of scrimmage. The 49ers rushed 40 times for 275 yards and a 6.9 average.

Kitchens didn’t hesitate in using immature, second-year receiver Antonio Callaway as the No. 3 wideout despite him coming off a four-game drug suspension and not practicing with the team for nearly two months. Callaway couldn’t get lined up correctly, was penalized for a false start and turned a touchdown into an interception with a bobble at the goal line.

Kitchens benched him for Damion Ratley in the second half but it was too late.

Kitchens’ poor decisions continued after the outcome had been decided.

Letting Odell Beckham Jr. return a punt in the fourth quarter of a blowout — I don’t care at all that he fumbled — made Kitchens look more clueless. And his explanation took it a step further down the wrong road.

“Odell catches punts every day. So, you know, just gave it a whirl,” he said.

Quarterback Baker Mayfield isn’t just not the same player he was as a rookie, he has been a shadow of his former self, with the exception of the Ravens game.

“Some of it has to do with the lack of protection. Some if it had to do with a couple bad throws, a couple bad decisions,” Kitchens said of Mayfield’s performance against the 49ers, the worst of his career. “Overall, we had some drops. You can’t do those things and play the quarterback position at an elite level.

“If you just want the honest answer, you have to have consistency around you, you have to be consistent yourself and none of that happened last night.”

The numbers are bad enough. Mayfield has a league-high eight interceptions, his 55.9 completion percentage ranks last and his 68.5 rating is better than only Ben Roethlisberger, Luke Falk and Josh Rosen.

What’s more difficult to quantify but even more troubling is Mayfield’s lack of comfort, awareness and presence in the pocket.

He was most impressive last year in the same area, sliding subtly in the tight quarters or escaping through openings that allowed him to keep his eyes downfield and complete passes. This season he’s not seeing the field as well from the pocket, doesn’t trust the line and is bailing too quickly, often choosing the wrong escape route.

Obviously it doesn’t help that the line hasn’t been as sturdy. The unit as a whole, and left tackle Greg Robinson in particular, has struggled against quality defensive fronts, giving Mayfield plenty of reason to worry about his safety.

But Mayfield needs to be better. He needs to hang in, take on the hits and complete more passes.

And the Browns need to find equilibrium.

Rediscovering the identity that was so effective against the Ravens would help. It included a strong running game from Nick Chubb, play-action passes, an efficient outing from Mayfield and a solid defensive performance.

“We found out what we needed to do, we just didn’t do it tonight,” Mayfield said Monday.

Kitchens also took solace in what had felt like a breakthrough in Baltimore but feels more like a fluke after the beatdown in the Bay Area.

“You have to have the first one before you can start being consistent,” he said. “We had the first one. We know what it looks like. We know we had our opportunities last night, and we did not make the best of it. We will learn from this and we will get better moving forward.”

If they don’t, a season of expectations will turn into one of expletives.

Prediction: 49ers 27, Browns 24
Commentary: Browns suffering through identity crisis as they try and decide if they are a good or bad team