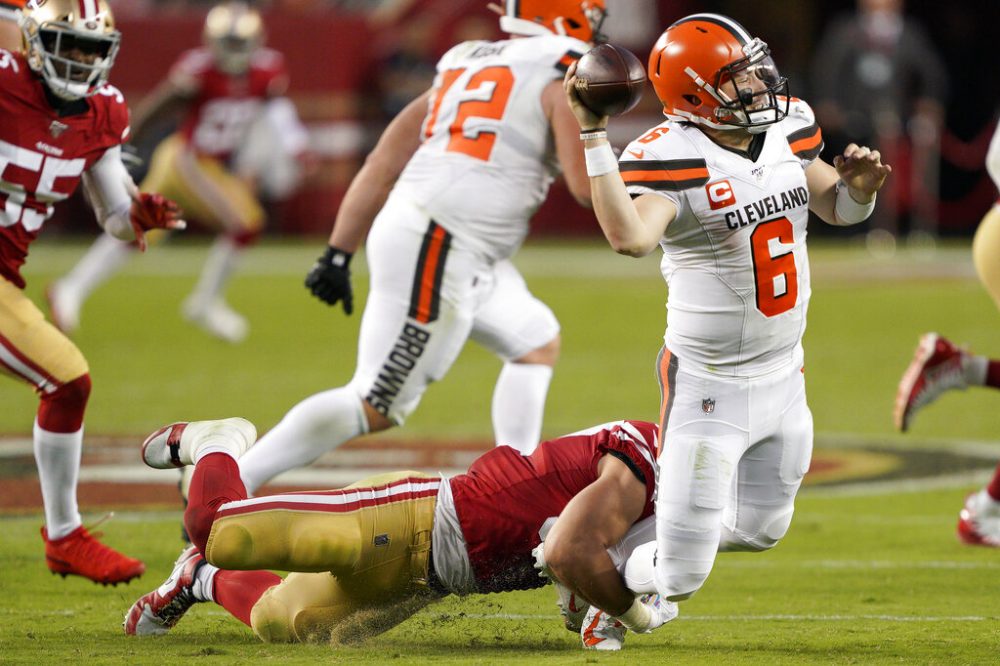 SANTA CLARA, Calif. — The Cleveland Browns punted on their first series. It was one of the few things that Freddie Kitchens’ team did right all night.

In a game where Kitchens and offensive coordinator Todd Monken pulled out all the stops, trying gimmick plays and a little trickery, the Browns repeatedly stopped themselves with turnovers, mistakes and missed tackles.

In front of a national television audience at that.

“It was Monday night football. Everybody in the whole world watched that and got to see that,” wide receiver Odell Beckham Jr. after Cleveland’s 31-3 loss to the San Francisco 49ers.

It would be easy to put this one on Baker Mayfield and the offense, and many will, but that would be misguided.

While Mayfield suffered through his worst game as a pro and was the target of a Nick Bosa taunt in the first half, the Browns offered no help on defense or special teams.

San Francisco outgained Cleveland in total offense 446-180 and had a whopping 275-102 advantage on the ground.

The Browns’ only score came on Austin Seibert’s 30-yard field goal in the second quarter. Cleveland got into the red zone again on its next series but wide receiver Antonio Callaway bobbled a low pass from Mayfield near the goal line and deflected the ball into the air, where 49ers nickel back K’Waun Williams grabbed it for an interception.

Williams returned the pick 49 yards to set up San Francisco’s third touchdown that had the 49ers rolling 21-3.

“That could have been points for us that got taken away and then they drive down the field,” Mayfield said. “It’s unfortunate, but that’s the little details. You can look back on many more things than just that. Honestly, it’s more than just one play that turned the game around.”

Mayfield had more than one bad play, too.

The Browns’ young quarterback completed 8 of 22 passes for a career-low 100 yards. He threw two interceptions, fumbled twice, was sacked four times and had a paltry 13.4 passer rating.

Kitchens defended Mayfield and said the problems were with the entire offense.

“So much of the quarterback has to do with the things around him,” Kitchens said. “Last week he played good because the guys around him played good. Quarterback can’t do it himself so he doesn’t.”

The 49ers did a good job of harassing Mayfield most of the night, forcing him out of the pocket into hurried throws.

“Every time I looked up those guys were around the quarterback,” San Francisco coach Kyle Shanahan said. “The way (the defense) played in the fourth quarter was the exact same way as the first quarter.”

Things got so bad that Kitchens pulled Mayfield and replaced him with Garrett Gilbert in the fourth quarter.

“I thought (Mayfield) was taking too many hits unnnecessarily,” Kitchens said.

Before Mayfield was pulled, San Francisco defensive end Bosa poked fun at the quarterback after forcing him into a hurried incompletion in the second quarter. Bosa, the second overall draft pick, got up and pretended to wave a flag and plant it in the turf as the crowd roared. It was a clear shot at Mayfield, who planted an Oklahoma flag in the turf after leading the Sooners to win over Bosa and Ohio State in 2017.

“I think everybody knows what that was for,” Bosa said. “Just wanted to get payback. He had it coming.”

Beckham added to the Browns problems when he coughed up the ball on a punt return. Beckham was running around with the ball held out in one hand and was hit by 49ers safety Marcell Harris, who was called up from the practice squad last week.

“I’m too good to do that,” Beckham said. “The game was close to done. I was just trying to give us some spark, try to give us some life and just did too much. You could feel the energy they had already taken out of us. It just seemed like we were ready to go home and I wanted to keep fighting to the final whistle.”

And just like that, the momentum the Browns built with their convincing 40-25 road win in Baltimore is gone.

It won’t get any easier from here, either. Cleveland hosts Seattle on Sunday before its bye, then returns to play at New England on Oct. 27.

“We’re not hitting the panic button,” Mayfield said. “I don’t think it’s anything besides looking in the mirror and seeing what we did wrong. It’s as simple as that. We have a short week. It’s going to be very mental for us.”