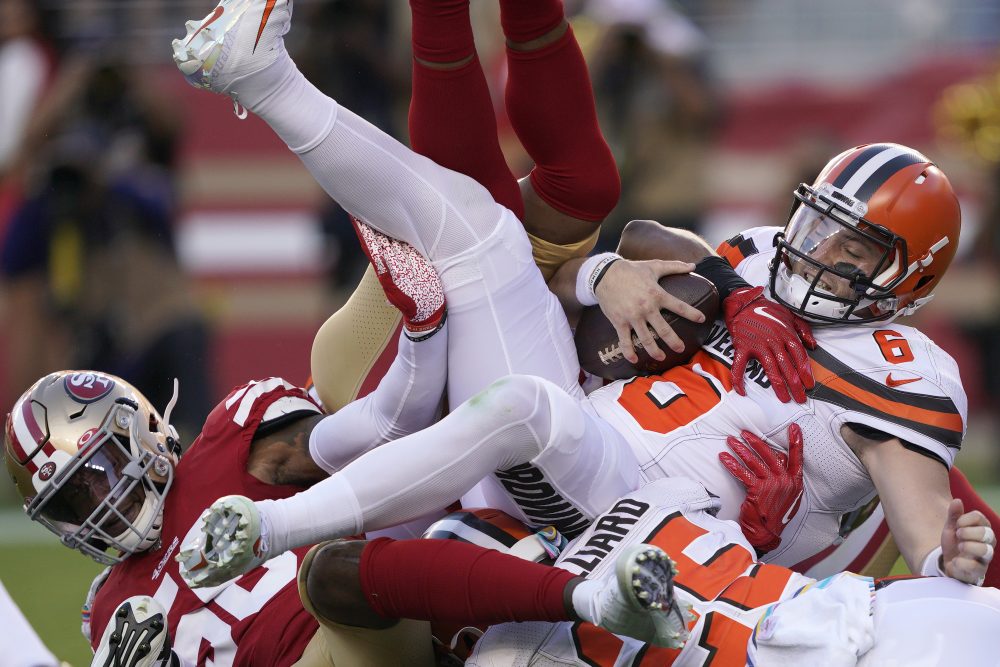 Baker Mayfield didn’t have pocket presence or accuracy as he played the worst game of his brief NFL career Monday night in a 31-3 loss to the 49ers.

He did have the manners to shake the hands of the 49ers before the pregame coin toss at midfield.

San Francisco cornerback Richard Sherman started a controversy when he told NFL.com that Mayfield didn’t shake hands with him before the coin toss, which provided an extra source of motivation.

Videos showed Mayfield, a captain, quickly shook hands with Sherman and the other 49ers, and hugged tight end George Kittle.

Sherman told Albert Breer of MMQB.com on Tuesday that Mayfield darting away after the coin toss was what angered the Niners.

“That’s it. They are making way too big of a story of a blowout,” Sherman said. “He pissed us off. We put a foot in his ass. End of story.”

“So you don’t see any difference in the way I shake everyone else’s hand and the guy who stands back with the petty shake,” Sherman tweeted. “Was Bs and I took offense to it then turns and runs off. It’s not that big of a deal.”

So you don’t see any difference in the way I shake everyone else’s hand and the guy who stands back with the petty shake. Was Bs and I took offense to it then turns and runs off. It’s not that big of a deal.

Sherman made it a story with his quotes to NFL.com’s Michael Silver after the game.

“What’s amazing, and annoying, was him not shaking hands at the beginning,” Sherman told Michael Silver. “That’s some college s—. It’s ridiculous. We’re all trying to get psyched up, but shaking hands with your opponent — that’s NFL etiquette.

“And when you pull bush league stuff, that’s disrespectful to the game. And believe me, that’s gonna get us fired up.”

The 49ers embarrassed the Browns, and Sherman hopes to have humbled Mayfield, the No. 1 pick in the 2018 draft who went 8-for-22 for 100 yards, two interceptions, two fumbles (one lost), four sacks and a 13.4 rating. He didn’t throw a touchdown for the first time in 18 NFL starts — 17 is the second-longest streak to open a career, trailing only Kurt Warner’s 23.

“Respect the game,” Sherman said, referring to Mayfield before the game. “You can have rivals, but pay your respect in that moment — especially when you’re young.

“He hasn’t earned anything in this league. How many games has he won? He’s acting like he was the MVP last year. If (Patrick) Mahomes did that, it would be one thing. But he would never do that, because he has too much respect for the game.

“And when you see a guy who doesn’t? You humble him every chance you get. Because eventually, he will have respect for the league — or he’ll be out of it.”

Mayfield’s refusal to shake hands would’ve been interesting given his history. He was snubbed by Kansas players before a game while he was at the University of Oklahoma and later grabbed his crotch and yelled obscenities toward the Jayhawks sideline.

Sherman got one of Mayfield’s interceptions, picking off an underthrown pass in the first quarter.

Mayfield’s night didn’t get better, as he was harassed all game by the 49ers pass rush, particularly rookie defensive end Nick Bosa. The No. 2 pick in the draft had two sacks, five quarterback hits, a forced fumble and a fumble recovery.

He also had the most noteworthy celebration.

After a takedown of Mayfield that drew an intentional grounding penalty, Bosa mimicked Mayfield’s flag plant after he and Oklahoma beat Bosa and Ohio State in Columbus in 2017.

“I think everybody knows what that was for,” Bosa said. “Just wanted to get payback. He had it coming.”

Mayfield said he didn’t know about it until told after the game.

Mayfield is last in the league with eight interceptions and near the bottom with a 68.5 rating. He didn’t look comfortable in the pocket against the 49ers, who have a talented defensive front, including Buckner and Arik Armstead, who are 6-foot-7.

“I don’t know how anybody thought he’d be able to see over Arik and Buck,” Bosa told reporters. “But he was panicking, rolling back and forth, double-clutching all game. … We’ve been rattling all the quarterbacks we play. I just knew he would hold onto it and we’d get to take some shots.”

“There’s no reason for him to say and do those things, especially given how little he’s accomplished,” Sherman said. “That’s where he’s gonna have to grow up. He might get there, but he has a long way to go.”

Not much goes right in Browns’ 31-3 loss to 49ers
Richard Sherman says he’ll apologize to Baker Mayfield for saying he didn’t shake his hand: It’s definitely my bad