Notes: Lack of catches for Odell Beckham Jr. frustrating for him and team during a loss 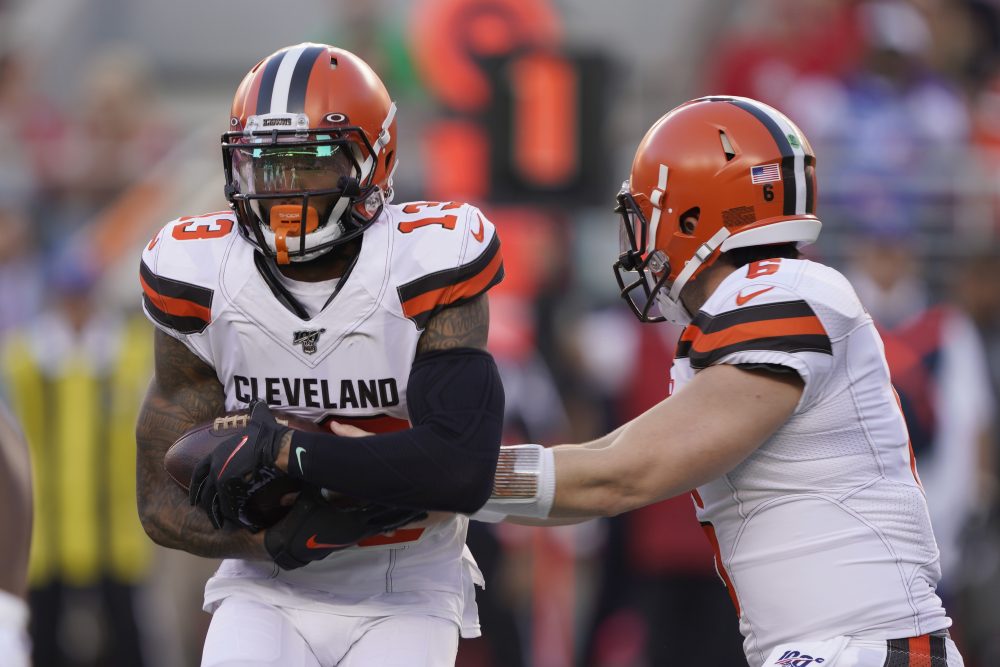 He’s caught two each in the last two games — his fourth and fifth with the Browns — for a combined 47 yards.

“He’s frustrated when he’s not getting the ball and we’re losing,” quarterback Baker Mayfield said Wednesday. “I mean, why not be? Because he feels like he could help us win if we get the ball in his hands. And when we’re winning, that’s the thing about it, he’s a team guy, he’s helping us win any way he can and he understands how teams are going to play him.”

Coach Freddie Kitchens and Mayfield haven’t been able to figure out how to get Beckham involved in the passing game as much as everyone would like. He has 23 catches in 43 targets for 335 yards and a touchdown, and Kitchens got defensive when asked if the offense has missed opportunities to get Beckham more catches.

“If we are more efficient and more effective in what we are supposed to do and how we are supposed to coach, then everybody is going to be happy,” he said. “Odell Beckham is a team guy, all right? I just pointed him out last week about his blocking and his excellent hustling to the ball and around the ball.”

Kitchens tried other ways to get Beckham involved Monday night in the 31-3 loss to the 49ers. Beckham took a handoff and completed a 20-yard pass to receiver Jarvis Landry on the first play and rushed twice for 15 yards.

“It’s frustrating when teams take him out of the game,” Mayfield said. “But it’s also an opportunity for other guys to make plays.

“We’ve got to do our job getting him the ball as many times as we can. He’s a game-changer, that’s why he’s here, that’s why he’s one of the best in the league. So we’ll do our part and we expect him to do his, as well.”

Beckham was absent for most of the offseason program and missed much of training camp with a hip injury. Kitchens dismissed the notion that’s affected his chemistry with Mayfield.

“We are into the season now. We are onto Seattle. That is the only thing I care about,” he said.

“It’s just understanding how we want to get things accomplished and I think right now we’re headed in the right direction,” Mayfield said. “I think we know exactly how we want to attack teams and exactly what we want to do.

“I think it’s about seeing how teams are going to play, and if there is one-on-ones we have to be able to take advantage of it. And if not, he’s got to be patient, and we do too of not forcing the ball to him and taking advantage of how defenses are playing, make them adapt before we can get the ball to him.”

Struggling Mayfield under siege, as Joel Bitonio says opponents want “piece of him”

WORKING THEIR WAY BACK

Starting cornerbacks Denzel Ward and Greedy Williams returned to practice for the first time since injuring hamstrings within 10 minutes of each other during practice Sept. 19.

They have missed the last three games.

Kitchens continued to refer to Ward and Williams as “day by day” before practice, and there’s a chance the team could hold them out Sunday against the Seahawks. The Browns have the bye after the Seattle game, which would give them two extra weeks before facing the Patriots on Oct. 27.

Williams and Ward were limited to individual drills, with the hope to do more Thursday.

“Uh … we’re still in debate,” Williams said when asked if there’s a chance he could play Sunday. “Just depends on how it feels throughout the week.”

Veterans TJ Carrie and Terrance Mitchell have filled in admirably for Ward and Williams.

“The guys who have come in have played exceptionally well,” Kitchens said. “We had some issues the other night that we are going to get corrected. They played good in spurts the other day, but they have played well up to this point.”

Williams, a rookie second-round pick, said he’s learned a lot watching and thinks he’ll be better for it when he returns.

“Yeah, no doubt. I have a great knowledge of what’s going on,” he said.

Receiver Rashard Higgins (knee) was a full participant in practice, which is a positive step toward a possible return Sunday. He’s missed four games since getting hurt in the first half of the opener.

Higgins was a full participant in practice Saturday but was inactive against the 49ers.

“He just got a little sore in the latter part of the week. That was all,” Kitchens said. “It is still kind of a day-by-day thing with him.”

** Backup tackle Kendall Lamm (knee) returned to practice in a limited role after being sidelined since the opener.

All 53 players on the active roster practiced.

Many coaches choose to defer because they get the ball to open the second half and there’s a chance for back-to-back scores to end the first half and start the second.

“I always think that we have a good game plan, that we can go down and score and give our defense a lead,” Kitchens said. “It has not happened in the last two games. Hopefully we get back on the positive side of that.”

The Browns have had the ball first in every game, because the opponent has deferred three times. They scored a touchdown to start the opener, got a field goal against the Jets and went three-and-out against the Rams.

Left guard Joel Bitonio decided during his second year he was better off staying off Twitter during the season. He stands by the choice.

“Twitter’s just toxic. So it’s not good in season,” he said. “It gives everybody an opinion. Sometimes it’s funny ’cause you’ll listen to the positive opinions on social media and be like, ‘Wow, they love me.’ And then you’ll want to hate all the negative opinions, but in reality it’s the same people giving the opinions. So why would you listen to one, not the other? It’s hard for the ego.”