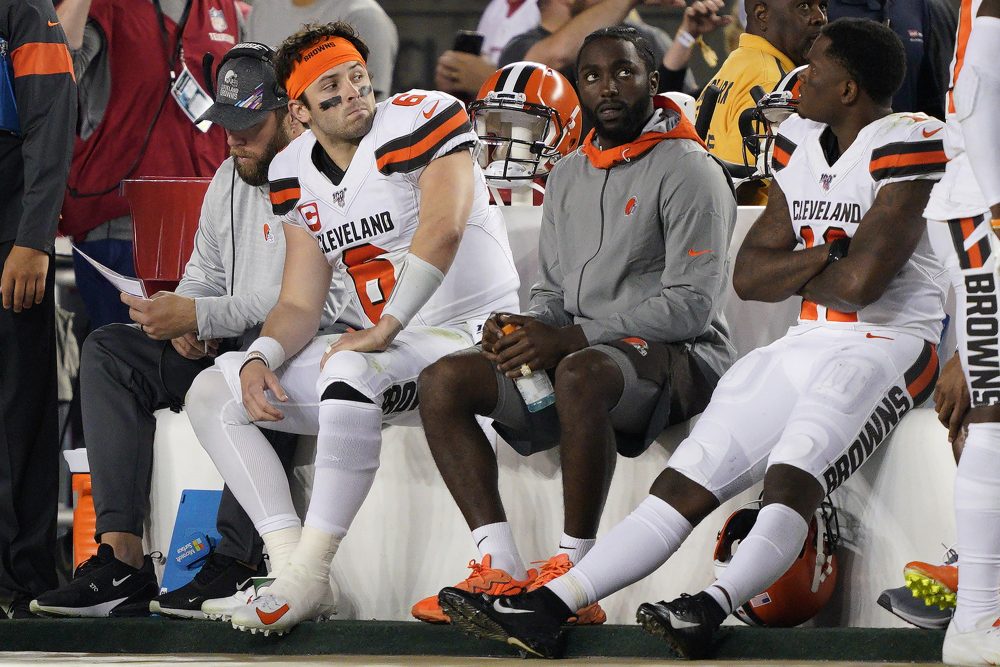 BEREA — Left guard Joel Bitonio has been protecting quarterback Baker Mayfield for more than a year.

It gets more difficult by the day.

Not only is Mayfield struggling to complete passes from the pocket, or escape it successfully, opponents have started to target him — even when the game is over.

The 49ers declared open season on Mayfield during and following their 31-3 victory Monday night. He was sacked four times and hit four more, then end Nick Bosa and cornerback Richard Sherman piled on postgame.

Sherman wrongly accused Mayfield of not shaking his hand before the pregame coin toss — Sherman said Wednesday he planned to apologize — and Bosa ridiculed his performance. That was after Bosa took down Mayfield, then mimicked him planting the Oklahoma flag after a win at Ohio State in 2017.

Mayfield got in a return shot at Bosa on Wednesday.

“I don’t think Sherman’s was a personal vendetta. He said what he said,” Mayfield said. “But Bosa’s — good for him. He had it premeditated. He’s been thinking about it obviously for two years now, so that’s a long time to think about that loss.”

Mayfield is proud to not be a “cookie-cutter quarterback,” but Bitonio has realized opponents are using Mayfield’s brash personality as motivation, even if he doesn’t understand the need.

“I just don’t know how someone can play harder,” he said. “I feel like you’re already at a point as a professional where you’re playing your hardest, at least I hope so. But obviously some guys are using it because we’ve heard it multiple times where teams are saying, ‘Yeah, we want to be motivated by this.’ And that’s what they’re using, so we’ve got to step up to the plate ourselves.”

Sherman accepted blame for embroiling Mayfield in a controversy over coin toss etiquette during an interview on “The Pat McAfee Show.”

“It’s definitely my bad,” he said. “I never want anybody to have to deal with some sh– that — I mean some stuff — that they didn’t do.

“And so, you know, the questions that he’s gonna get and the annoying, nonsense questions about some stuff that happened in a game that’s already been done, you know, sure he’ll get an apology for that. I’ll probably reach out to him via text or social media to actually get a hold of him and talk to him in person, I mean on the phone. But, yeah, because that sucks. Yeah, yeah, he definitely deserves an apology, and that’s my bad on that.”

Mayfield spoke to reporters following practice and said he hadn’t checked his phone to see if Sherman had been in touch.

“It’s nice of him,” Mayfield said. “I know what I did, but that’s the one time the camera and something recording me has gone in my favor.”

Mayfield shook hands with Sherman and the 49ers before the coin toss, then headed straight to the sideline after it. Sherman wanted more interaction and told McAfee “I felt disrespect.” He later told San Francisco reporters he was over the episode.

“I’ve said my piece about it,” he said. “I’m going to have a conversation with him, and then I’m going to be done with it. It’s just funny it got so big. Man, I thought football is what they watch. I guess it’s the soap opera.”

“Nah, I respect him and who he is as a player,” he said. “He’s a great player and has been for a while and in no way did I mean anything like that.”

Mayfield has plenty to worry about on the field. He’s thrown a league-high eight interceptions, ranks 33rd with a 55.9 completion percentage, 32nd with a 68.5 passer rating and tired for 27th with four touchdowns.

Two of the biggest regressions from his impressive rookie season have come in the red zone and under pressure.

According to ProFootballFocus, Mayfield is 17-for-50 for 222 yards with a touchdown, four interceptions, one big-time throw and a 22.3 rating when pressured this year. Last year as a rookie, he was 61-for-118 with eight touchdowns, seven interceptions, 12 big-time throws and a 73.5 rating.

The line has struggled at times, but Mayfield just doesn’t look as comfortable.

“I will reiterate just because you are coming back another year does not mean you are going to pick up where you left off,” coach Freddie Kitchens said. “Everything changes. Everything is different. Baker knows what he needs to work on, and he is doing a good job of working on it and he will continue it.”

The Browns are 2-3 and the criticism is coming at Mayfield from many angles. He said he’s playing better in some areas — pre-snap decisions and going through his reads — but acknowledged there are also “a lot of areas” for improvement.

At the top of the list is protecting the ball.

He talked all preseason about needing to do a better job not taking sacks or throwing interceptions. He’s been sacked 16 times to go with the eight picks, and also fumbled twice against the 49ers, losing one.

“Anytime you turn the ball over it’s going to hurt your team,” he said. “Interceptions are going to happen. Tipped balls and things like that are going to happen. That’s why I’m not one to look at stats directly, but careless mistakes like fumbling is one I’d really like to have back — not putting us in position to hurt this team. Any time you turn the ball over you’re not good enough.”

Mayfield said the Browns identified the problems and are working to fix them. Those around him aren’t worried about the early struggles dragging down Mayfield.

His teammates haven’t lost faith in their quarterback and captain.

“Baker, he’s competitive, man,” running back Nick said. “He has a fire inside him that’s always burning and very intense. We all know that he’s going to start playing a lot better. He’s going to get back to what we know he is.

“He’s not letting it get to him. We know what to expect with Bake. He’s going to come out hot and do a lot of good for us.”

Browns feel they have “lot of momentum” but need to beat 49ers on Monday night, stack wins to keep it going
Defense refocused, looking to rebound after giving up 275 rushing yards but must deal with Russell Wilson and Seahawks offense