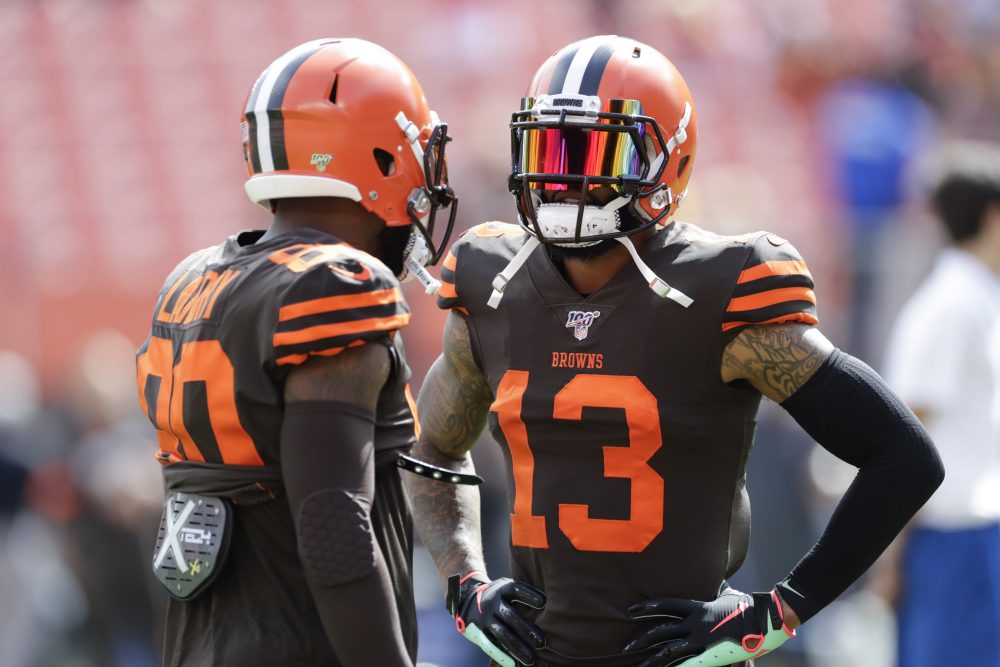 BEREA — Jarvis Landry went out of his way to remind everyone he’s not the play caller.

He made it just as clear what he would do if he were.

“I don’t call plays, right? So I just say just from my perspective we just have to be intentional. We have to just deliberately get him the ball,” Landry said Thursday. “Get all of our playmakers the ball. Guys that are going to make plays for us, just get them the ball.”

At 2-3 and coming off a 31-3 loss to the 49ers on Monday night, the frustration level has been high this week. A primary source is the inability to get Beckham as involved as everyone expected when he arrived from New York. The process starts with coach Freddie Kitchens, who doubles as the play caller.

The lack of production in the last two games has been startling. He has four catches, two in each, for 47 yards. In 59 games with the Giants he had only one game with fewer than three catches.

The three-time Pro Bowler admitted his frustration stemming from the loss to the 49ers after accepting the two catches the previous week because they came in a win over Baltimore.

“I hate losing, period, so anytime we lose and I don’t feel like I did anything to help win the game I’m going to be frustrated,” a downcast Beckham said. “It’s just the bottom line. I’m a winner in my heart and I hate losing.”

How has he handled the worst statistical stretch of his six-year career?

“I’m not calling plays or designing anything,” Landry said, continuing a theme he carried throughout the interview. “The way that it’s been going, we haven’t really been making enough plays without him touching the ball. So we’ve definitely got to find a way to include him even more in the offense and be intentional with it.

“It doesn’t matter if the defense knows it. We’ve got to be intentional with getting him the ball. Getting playmakers the ball, period.”

Landry included himself. He has 22 catches, in 39 targets, for 403 yards and zero touchdowns, and eight catches for 167 yards came in the win against Baltimore.

“I feel like we know we’ve been kinda doing all that we can. Guys have been taking advantage of their opportunities,” he said. “We’ve got to find ways to get guys that we believe that’s our game-changers the ball and the defense has got to try to stop it. I think the defense should have their hands full and should have to stop us.”

He was as intentional as he wishes the play calling would be. He was asked if he’s got any good calls for third-and-19.

Kitchens and quarterback Baker Mayfield have been careful not to force the ball to Beckham in the passing game. Defenses have used frequent double teams to discourage Mayfield from throwing to Beckham, and it’s worked.

The Browns rank 25th in the league with 18.4 points a game, and that dips to 13 if the 40-point outburst against the Ravens is removed.

Landry said he tries to be “transparent” with Kitchens about what he sees in the game plan and through film study.

“I can only give my suggestion, other guys can only give their suggestion about what they’re seeing, about what’s going on,” he said. “We still have to go out there and block, catch, throw, tackle, kick, punt, whatever, but I’m sure they’re doing everything they can do to put us in position to be successful and win.”

Coordinator Todd Monken noted earlier in the year Beckham received more single coverage than people would think. He added Thursday the offense isn’t taking advantage of those chances as often as it would like.

He broke down the plethora of offensive breakdowns in the loss to the 49ers, saying everyone took a turn in the failure, starting with the coaches.

“I will say this, it is a week-to-week league,” he said. “It does not take long to get some of these things resolved and all of the sudden, momentum is a powerful thing and you feel good about it.”

Beckham was acquired in March in a blockbuster trade with the Giants and was expected to turn the Browns offense into a powerhouse. He played at least 12 games in four seasons with the Giants and had 1,000 yards in all of them. He’s averaged 90.8 receiving yards per game, second all time to the 95.6 by Atlanta’s Julio Jones.

He had a streak of 60 games with at least three catches — third in NFL history — broken in Baltimore.

“Can’t pinpoint it,” he said of what’s off this year. “Just gotta keep working. Just make it happen. Whatever opportunities you get, you make the most of them, and that’s really it. That’s all you can do at the moment.”

He feels he’s where he needs to be with the system.

Kitchens has tried to get the ball in Beckham’s hands in unconventional ways. He’s thrown two passes, rushed twice and was allowed to return a punt in the fourth quarter Monday night.

“It’s just whatever to win. I just want to help,” he said. “I feel like I was brought here to help this team and that’s all I want to do, so if it has to be handoffs, like it’s whatever.

“Just finding ways to have successful plays, not just giving me the ball to appease me or anything like that. It’s about more about having success within the game and within the team.”

“I can take it. I can handle all this stuff, so just put it on me and see what happens.”

Richard Sherman says he’ll apologize to Baker Mayfield for saying he didn’t shake his hand: It’s definitely my bad
Browns reach “fork in the road” by not “playing to potential,” which has created “all-time” sense of urgency