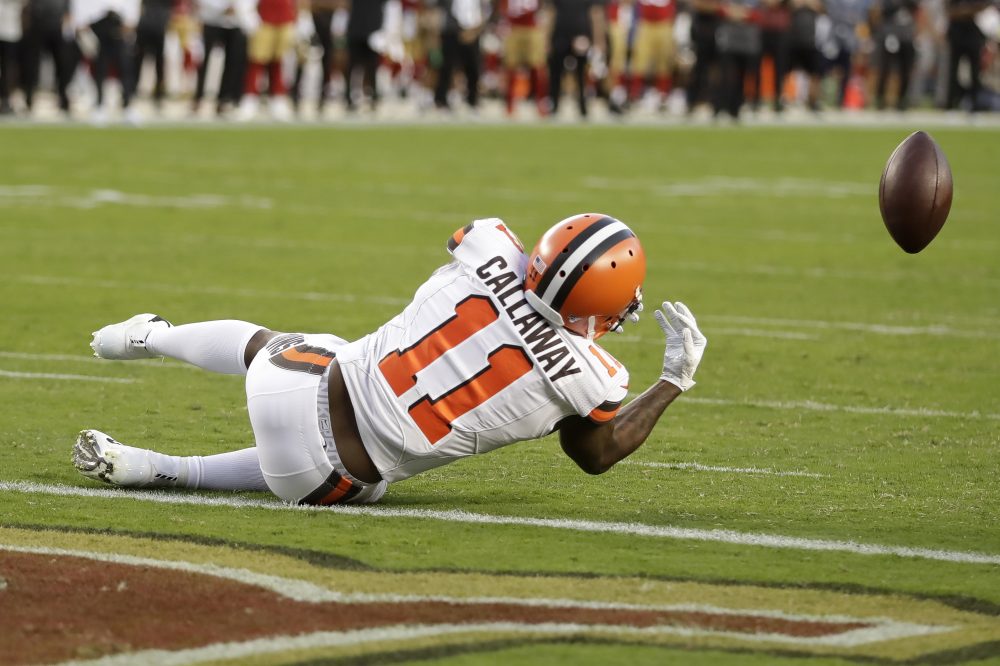 BEREA — It turns out receiver Antonio Callaway had a chance for two potentially game-changing touchdowns Monday night in the 31-3 loss to the 49ers.

Receiver Odell Beckham Jr. took a handoff from Baker Mayfield on the first play and was supposed to throw to Callaway, who had streaked behind the secondary. Instead, Beckham threw to receiver Jarvis Landry for a 20-yard gain.

“I kind of got fooled. It seemed like 24 (cornerback K’Waun Williams) was going to run up and he ran up to me and he stepped back and I was already in mid-throw,” Beckham said Thursday. “Jarvis looked me dead in my eyes, we made eye contact and I couldn’t look at him and then look past him. He’s looking straight at me so I just had to throw it to him.

“If I could go back, I would’ve thrown it to Callaway. That’s who we had drawn it up for and just kind of being the first play, it’s like you just want to get the drive going, take a safe throw and onto the next play.”

Callaway bobbled a pass at the goal line in the second quarter that should’ve been a touchdown but was intercepted by Williams and returned 49 yards to set up a 49ers touchdown. The 14-point swing took the score from what would’ve been 14-10 to 21-3.

“It’s catastrophic. It completely changed the game,” coordinator Todd Monken said. “As average as we played up to that point, it’s changed. From then it was not fun, but at that point we were OK.”

Callaway was benched for the second half after the interception, a false start, no catches and difficulty lining up properly. Coach Freddie Kitchens blamed himself for putting too much on Callaway mentally in his return from a four-game drug suspension.

Commentary: Browns suffering through identity crisis — are they a good team or a bad team?

Beckham thought the game also turned on his opening decision.

“You never know how the game would’ve went,” he said. “So I look at that and I look at the momentum could’ve been completely different and that’s something you just deal with it. That’s something that I’ll live with and I’ll never forget that play.”

The completion to Landry was the 500th catch of his career and came from his best friend.

“I actually honestly didn’t know until a couple days ago that there was 500 catches and that it was from O,” Landry said. “But what a way to do it.”

He said the receivers hooked up in practice at LSU but never in a game.

The coaches knew the risk of allowing Beckham to return a punt — his first of the season — with 7:17 left in a game the Browns trailed 28-3. One of the team’s best players could get hurt performing a secondary role in a game that appeared out of hand.

“I think it’s worth it because you’re trying to provide a spark, not only for your team in that game, but going forward and getting them to believe in what we’re trying to do as a return unit against Seattle, against New England, against Denver,” special teams coordinator Mike Priefer said. “We have to build a foundation and you don’t just build a foundation by going out there and quitting with 71/2 minutes to go.”

Beckham wasn’t hurt but did fumble as he tried to reverse field, and the 49ers recovered.

“When you’re in a situation where you can use an athlete like him, why wouldn’t you?” Priefer said. “You can’t ever coach scared, ‘Oh, my gosh, he might turn an ankle or whatever.’”

Priefer and Beckham talked earlier in the game about using him as a punt returner.

“Odell was trying to make a play. God bless him, he wanted to go out there,” Priefer said. “I cleared it with Freddie and he went out there to try to provide a spark for our team.”

Fullback Kyle Juszczyk is an integral piece of the 49ers offense, yet defensive coordinator Steve Wilks mostly stuck with his preferred three-safety package rather than going with the traditional base defense of three linebackers.

“We felt No. 1 that our safeties are strong enough, big enough and they understand the run fits” Wilks said. “I do not think that really had anything to do with the outcome of the game to be honest. We did not align correctly at times. I thought we were thinking too much. All of that goes back on me.”

The 49ers jumped on the Browns with an 83-yard touchdown run from Matt Breida on their first offensive play.

“That play can’t happen,” Wilks said. “Starting up front, the 3-technique (tackle Sheldon Richardson) swims to the guard and allows the guard to get to the second level, we can’t allow that to happen. Now the linebacker (Mack Wilson) needs to fall back off that particular run but he did not have the opportunity because the guard was in his face. And then the bottom line, the safety (Damarious Randall) has to get him down. Regardless of what happens, we have to find a way to get that guy down in the secondary.”

Receiver Rashard Higgins (knee) appears on his way to playing Sunday against the Seahawks for the first time since the opener. He practiced fully for the second straight day.

The Browns have missed Higgins’ connection with Mayfield as the passing game has gotten off to a sluggish start.

** Cornerbacks Denzel Ward (hamstring) and Greedy Williams (hamstring) were limited again after returning to practice Wednesday, but Kitchens said they did a little more.

They’ve missed three games and could sit Sunday because of the bye next week. They would have two extra weeks to get ready for the Patriots on Oct. 27.

“When they are ready to play, they will play, but we definitely factor in that the bye is coming up,” Kitchens said. “We are trying to put our best foot forward this week and do what we can this week to compete at a high level.”

Tavierre Thomas kidded Randall that he wouldn’t have gotten the first blocked kick of his career if Randall had come up with an interception against the 49ers. Thomas got around the corner and reached back to block the 32-yard field goal of Robbie Gould.

“The wing starts to hook him so he just kept fighting through it and turned his body and he blocked it,” Priefer said. “It was a great play by him. I really respect our defensive players on that unit. We finally got one the other day and we are going to get one inside, too.”

** Landry will probably remain the primary punt returner this week, according to Priefer, as Callaway works back in following the suspension.

“He’ll be integrated into our punt return group as soon as he’s ready,” Priefer said.