Defense refocused, looking to rebound after giving up 275 rushing yards but must deal with Russell Wilson and Seahawks offense 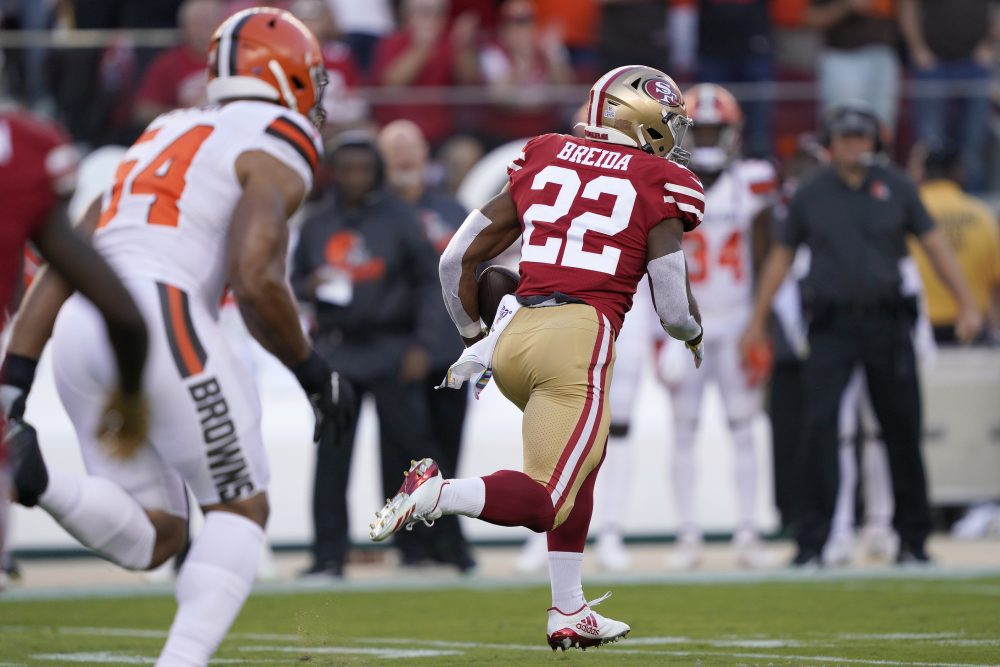 BEREA — The 31 points were painful.

The 275 yards rushing were excruciating for the Browns defense to digest Monday night in the loss to the 49ers.

“It breaks you down to your core and it makes you take a look at yourself to see what you’re doing wrong,” defensive end Myles Garrett said Friday.

Defensive coordinator Steve Wilks pointed the finger at himself for the disaster. He expanded the game plan and the players couldn’t handle it. He said they were thinking too much, aligned wrong and played slow.

“Very embarrassing the way the defense performed,” he said. “I take full blame and responsibility for that. It is definitely not indicative of who we are.”

The defense gave up an 83-yard rush for a touchdown on San Francisco’s first offensive play and was off-balance all night. The 49ers rushed 40 times for a 6.9 average and two touchdowns.

“It felt like a nightmare,” free safety Damarious Randall said. “They did what they wanted.”

The 49ers’ dominance sent the Browns searching for answers.

“We just have to go back to our foundation, our fundamentals, everything we did previously to have success in the games that we’ve won,” Garrett said. “Don’t shy away from it. If that works for us, stick with it.

“We can’t get cute and try to beat people playing their game. Wilks agrees with that. You’ll find a remedy for that with the talent your guys have up front or we have on the back end, as well.”

“We are going to get back to doing what we do — fundamentals and technique, the identity of what we established from Day 1,” Wilks said. “I am disappointed in our performance, but I am not overly concerned about us getting this corrected.”

They were working on a tight schedule with quarterback Russell Wilson and the seventh-ranked Seahawks offense coming to town Sunday afternoon. Wilson is the first quarterback in the Super Bowl era with 1,400 passing yards, 12 touchdowns and zero interceptions through five games. He leads the NFL with an astonishing 126.3 passer rating — 158.3 is perfect.

“Electric. Fun to watch. Helluva quarterback,” Randall said. “Russell is one of the most talented quarterbacks this league has ever seen. I’m definitely looking forward to playing him.”

Wilson does a couple of things so well that make life so difficult on a defense.

He’s extremely elusive, allowing him to run for yardage, or more often buy time for his receivers to break free. He’s rushed 27 times for 120 yards and two touchdowns, and against the Saints on Sept. 22 became the first player since 1950 with 400 yards passing, two passing touchdowns, 50 yards rushing and two rushing touchdowns in a game.

“True escape artist, second to none,” said defensive tackle Sheldon Richardson, who played with Wilson in Seattle in 2017. “He can throw the ball 60 yards down the field right in the breadbasket to whoever is open or he throws them open.”

Wilson is also incredibly accurate, whether he’s in the pocket or moving to his right or left. He’s second in the league with a 73.1 completion percentage.

“When he gets out of the pocket, he was drafted by the MLB, he’s got an arm, he can make all the throws, he can throw it from all the angles,” middle linebacker Joe Schobert said. “You see it constantly. He gets out of the pocket, the play busts down, he puts the ball in a perfect spot where only his guy can catch it. He does a very good job of doing that stuff.”

Schobert referred to Seattle’s receivers operating in “acres of space” because the defensive backs lose track of them when they check to see if Wilson has escaped the pocket.

“The play is never over,” Randall said. “We could have a blitz on and it looks like we’ve got him dead to rights and he can find a way to get out of it.”

Safety Jermaine Whitehead said the defensive backs must play until they “hear the echo of the whistle,” but believes there will be chances for interceptions despite Wilson’s streak of 174 passes without one.

“He definitely gives us opportunities to make plays on the ball,” Whitehead said. “With him scrambling like that, he definitely takes some chances and they win a lot of those chances. He believes in his guys on the 50-50 ball, but I think we’ve got some talented DBs in our room that’s going to go up and compete for those balls at that moment.”

The defensive line, which has received criticism for not living up to its hype and potential, can do the secondary a favor by keeping Wilson in the pocket and taking him down. He’s been sacked 13 times in Seattle’s 4-1 start, and Garrett plans to take an aggressive approach after playing passively against Baltimore’s Lamar Jackson, which he called “playing keepaway.”

“I felt like I was sitting behind trying to make sure that we wasn’t escaping and I did do more of that than I did rushing,” he said. “So that was never enjoyable for me and I want to make sure I do more rushing of him and more sacking than I am just sitting and waiting.”

In order for Garrett to have the most pass rush opportunities, the Browns must stop the run and lessen the threat of play-action passes. They’re 29th in the league against the run, allowing 150.8 yards a game, and 30th at 5.2 a carry. They face Seattle’s Chris Carson, who’s ninth in league with 380 yards and rushed for 1,151 last year.

They hope 275 will be the turning point.

“I felt the urgency directly after the game. I think guys understood talent ain’t just going to win us games and we’re going to have to go out and execute at a high level.”

Struggling Baker Mayfield under siege, as Joel Bitonio says opponents “want piece of him … and we’re ready”
As Baker Mayfield struggles to start Year 2, Seahawks coach Pete Carroll cautions it takes years to figure out how to play QB in NFL but Mayfield is “going to be great”