As Baker Mayfield struggles to start Year 2, Seahawks coach Pete Carroll cautions it takes years to figure out how to play QB in NFL but Mayfield is “going to be great” 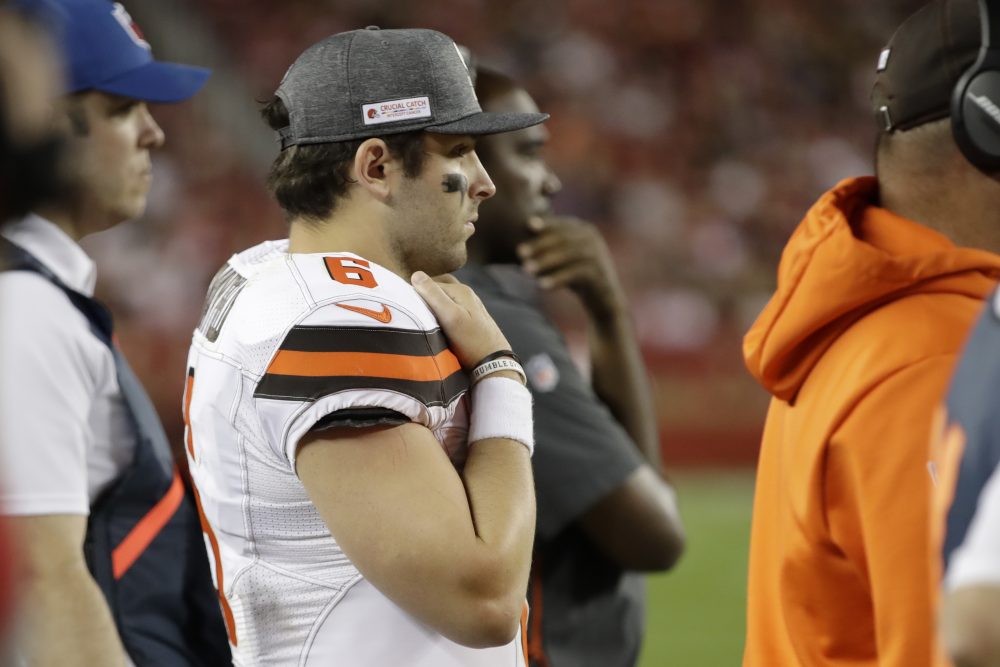 Russell Wilson took a deep drop, looked downfield, didn’t see what he wanted and began running to his left. After several steps he squared his shoulders without setting his feet and launched the ball.

A throwaway to preserve possession in the red zone?

“I didn’t know what he was doing with it,” Seahawks coach Pete Carroll said.

Starting what might be the play of the year in the NFL.

Wilson’s projectile was intended for receiver Tyler Lockett, who was closely covered by Rams safety Eric Weddle in the back of the end zone. Lockett made his way to the left corner and snatched the ball, which was about a yard out of bounds, while getting both feet inbounds.

“I was surprised by how exquisite the result was,” Carroll said. “It was just an amazing play in the littlest amount of space.”

Browns free safety Damarious Randall is friends with Lockett and asked about the play.

“Impressive. I don’t even think that they can redo that on a video game,” Randall said. 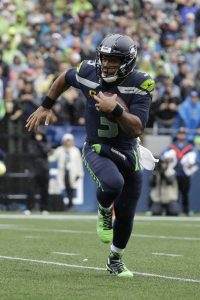 With throws like that and a league-best 126.3 passer rating, it’s easy to forget Wilson, a third-round pick in 2012, wasn’t always this efficient. Yes, he went to a pair of Super Bowls early in his career, winning one, but Carroll made it clear the journey to greatness is a long one filled with potholes.

“It takes years to figure out how to play quarterback in the NFL,” he said. “Early on when Russ had a lot of success, he was immediately compared to the top quarterbacks in the league. I always used to say, ‘Give him a few years. These guys are in their double-digit years of their career. He is way behind them.’

“It just takes so long to learn and command a game. There is just so much to learn.”

The reminder is useful regarding Baker Mayfield.

He’s in the worst stretch of his two-year career, looking little like the No. 1 pick he was less than 18 months ago. He’s had one good outing in the 2-3 start and ranks at or near the bottom in the key statistical categories.

He’s 33rd in completion percentage (55.9), last in interceptions (eight) and 32nd in rating (68.5), ahead of only Luke Falk, who was cut by the Jets on Saturday, and Miami’s Josh Rosen. He’s thrown for 1,247 yards and four touchdowns and hopes to get well against a Seahawks defense 26th against the pass (270.6 yards a game).

“They will fool you because they are so talented, and they fool you that they got it and they make good plays here and there,” Carroll said. “It takes a long time to really own and command what is going on with both sides of the ball, being able to handle protections and adjusting them, the ability to change runs and put you from one run to another and being able to see the availability of a play. It just takes a really long time.

“Russ in the last two, three years has continued to improve, and he is the best he has been. It is a result of the great consistency. It just adds up eventually.”

Patience is a tough sell anywhere in 2019, and even more so around an organization that hasn’t been to the postseason since 2002 but expects to return this year. While it’s difficult in the moment, especially when each game is crucial and expectations are so high, taking a big-picture view is necessary.

“There’s so much growing that goes on over the course of your first two, three years, to think it’s just one clear path forward isn’t the way to look at it,” center JC Tretter said. “It’s all about sitting there and understanding who you are and what you bring to the table and that you’re going to have ups and downs, but it’s going to be a path forward, not always the cleanest, but it’s always going to be a path forward. And if you’re confident in who you are and what you do, you’ll find your way through that.

“Baker is as confident of a guy as you’re going to find, and that’s a lot of what you need. And I think he’s very smart, too, where he understands everything that’s going on.”

The Mayfield-Wilson comparison has been made for years, due to their strong, accurate arms and, mainly, lack of ideal height — Wilson comes in under 5-foot-11 and Mayfield under 6-1. But it’s not a perfect comparison because Wilson is a much better athlete, which is evident in his rushing numbers. He and Carolina’s Cam Newton are the only quarterbacks to throw for 25,000 yards and rush for 3,000 in their first seven seasons.

Mayfield doesn’t need to be an elite athlete to succeed. He does need to match Wilson’s work ethic.

“His military background comes in effect, puts his headphones in in the locker room, locks in, you see him in his playbook, always watching film,” said defensive tackle Sheldon Richardson, who was Wilson’s teammate in 2017. “He cracks a joke here and there, might be a little corny, but other than that he’s Russ. I put him on a high pedestal in my book, great teammate.”

He’s never won fewer than nine games in a season — the 75 wins through seven seasons are the most in NFL history — and his .679 winning percentage is third among active quarterbacks with at least 16 starts, behind Tom Brady (.779) and Patrick Mahomes (.773).

His career 101.5 rating is second in NFL history behind Aaron Rodgers’ 102.8, his 99.1 rating on the road is highest in NFL history and he’s a six-time Pro Bowler. And for years he did it without a quality offensive line.

“The most significant aspect of it is his belief in himself, he believes that those things are going to happen and he is capable of doing it,” Carroll said. “He sees the opportunity where maybe other people do not.”

Carroll sees a lot to like in Mayfield, who set a rookie record with 27 touchdown passes.

“He has all the ability,” he said. “He has great awareness. He has had tremendous experience throwing the football. He is just way ahead of schedule for most guys. That is why he was chosen where he was. Just the sense, the arm talent and accuracy.

“Sometimes things are going well, and sometimes they are not going as well. You just have to keep staying the course and keep battling, and that is what he is doing. He is a great competitor. He has been up and down before as everybody has. You just keep believing in yourself and keep coming back. He is a dangerous football player. He has magic in him, and he can see stuff and do stuff that few players can. That is why he is who he is. He is going to be great when the time comes.”