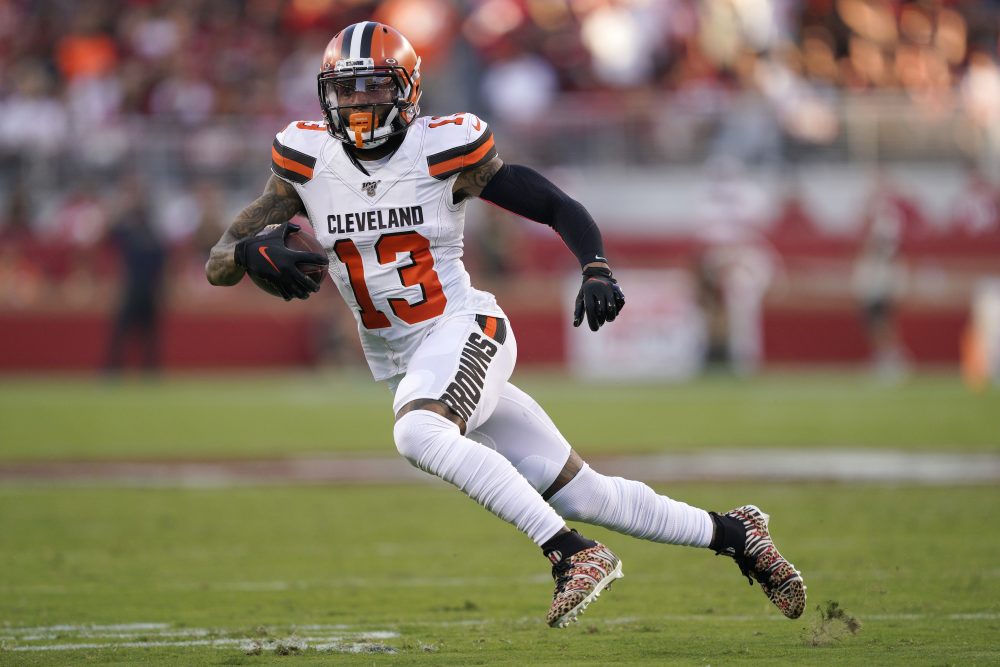 Jarvis Landry either had to get it off his chest, or he was doing a favor for fellow receiver and best friend Odell Beckham Jr. Whatever the motivation, Landry got his point across during his time with reporters Thursday. He stayed on message, which was a simple one: The Browns need to get Beckham the ball.

“I don’t call plays, right?” Landry said. “So I just say just from my perspective we just have to be intentional. We have to just deliberately get him the ball. Get all of our playmakers the ball.”

The public criticism of coach and play caller Freddie Kitchens could be a source of friction, but Kitchens tried to defuse the situation by saying he agreed with Landry. The fact is, the offense needs Beckham to get going. He has two catches in each of the last two games for a combined 47 yards, and the Browns rank 20th in passing (227.8 yards) and 25th in scoring (18.4 points).

Kitchens and quarterback Baker Mayfield haven’t been good enough taking advantage of the frequent double teams of Beckham, and general manager John Dorsey didn’t trade Jabrill Peppers and a first-round draft pick for him to be a decoy. The chances have been there to get Beckham the ball, even in the red zone, where he’s been a non-factor, but the connections have been missed.

“As a receiver a lot of our success doesn’t come solely from us,” Landry said. “A lot comes from being able to protect the quarterback, being able to get the snap, being able to drop back and read it. There’s a lot of things that goes on for us to be able to be successful and be able to make plays. So you just can’t pinpoint one thing, whether it’s the calls or the progression. We need to find a way to get better at it.”

Beckham has averaged 6.5 catches and 90.8 yards a game in his career and had gone 60 straight games with at least three catches before the back-to-back two-fers. He’s averaging 4.6 catches and 67 yards with the Browns, and he’s mystified by the struggle.

“I really don’t know how to answer it,” he said. “The only thing I can think of, it sounds funny, but we just gotta do better — do more to get open, do more when we do get an opportunity. That’s it.”

The season was an instant sellout. Fans were bursting with anticipation before the opener on the lakefront in September. They listened to the team and filled the stadium on time.

They have yet to be rewarded with a home win. The Browns are 0-2 — the ugly 43-13 opener against the Titans and the 20-13 prime-time loss to the Rams — and if they lose Sunday against the Seahawks, they won’t have another chance to leave FirstEnergy Stadium happy until Nov. 10 against the Bills.

“Our fans deserve us to come out and give them great effort, great enthusiasm, keep them in the game the whole game and deliver a win at the end of the day,” safety Jermaine Whitehead said. “So this week definitely has been more about being a Cleveland Brown and what it means to us and the people that really support us and root for us.”

The Browns started 2-0 on the road before the Monday night misery at San Francisco, which allowed them to stay afloat. The only way they’ll be able to make the expected run toward the playoffs is by stacking wins at home.

“We have to take a lot of pride when we play at home,” cornerback TJ Carrie said. “Our last couple home games haven’t been successful, and it means that we have to start making more of an impact and definitely when we come at home we’re always the favorites. We have to always think of ourselves like that. In our own atmosphere we have the fans, our crowd, they’re definitely going to make an impact for us, so we definitely have to showcase that this week.”

The Seahawks are the perfect opponent for the fans to unleash the loudness. Seattle’s CenturyLink Field is one of the league’s noisiest venues, giving the Seahawks a distinct advantage. Cleveland can flip that, making it difficult for quarterback Russell Wilson to operate.

“We need to capture that kind of momentum again ’cause when you do that and the crowd’s into the game, it’s a dangerous place to play when you come here,” middle linebacker Joe Schobert said. “The Dawg Pound gets rocking and it’s an intimidating environment, I think, and getting this first win at home, it’d be huge in terms of establishing that again this year.”

The defense has all the motivation it needs to stop the run — it doesn’t want to get embarrassed again after allowing 275 yards on the ground to the 49ers on Monday night. The Seahawks won’t make it easy. Chris Carson is a powerful, determined runner who ranks ninth in the league with 380 rushing yards, and they have the added element of Wilson keeping the ball on scrambles, zone reads and designed runs.

Seattle’s run game is more straightforward than San Francisco’s, which used a bunch of pre-snap motion and is heavy on the outside zone scheme. The Browns got “cute” last week, according to end Myles Garrett, and plan to get back to basics on defense. They have plenty of talent, especially up front, but need to play up to it. They’ve allowed 150.8 rushing yards a game, ranking 29th in the league.

Carson was fifth in the league last year with 1,151 yards, including six 100-yard games. He’s more of a bruiser than a breakaway threat with a 4.0-yard average, one rushing touchdown and a long of 22.

“He is going to run the ball just as hard as those guys did last week,” coordinator Steve Wilks said.

“He has great hands, great vision and great balance. He is an overall great player,” Kitchens said. “I loved him when he came out. He is a tough guy, good size and good speed. He is really an all-around great back.”

MAN IN THE MIDDLE

The Browns want to rely on running back Nick Chubb as the passing game continues to search for answers, but Seattle presents a stiff challenge. The Seahawks’ fourth-ranked run defense (80.0 yards a game) is led by big, bad Bobby Wagner (6-foot, 242 pounds) at middle linebacker. He’s a five-time Pro Bowler and four-time first-team All-Pro with 964 tackles since 2012, second in the league to the 1,004 of Carolina’s Luke Kuechly. Wagner needs 21 more to pass Eugene Robinson as Seattle’s all-time leader.

“Their defense starts with Bobby Wagner in the middle, the best all-around linebacker, coverage, run game, he blitzes a lot, as well,” left guard Joel Bitonio said. “All those things make him dynamic.”

Wagner’s strength and impact were on display in the win over the Rams last week when he ripped the ball from Todd Gurley’s arms for a fumble.

“He’s very special,” Chubb said. “He’s very big and physical. He knows the game well, too, and he’s been around for a while, so it’ll be a great challenge for us.”

The Browns counter with Chubb, who still managed 87 yards last week despite the big deficit forcing the Browns to throw, which was a solid follow-up to his 165 against the Ravens. Chubb is fourth in the NFL with 485 rushing yards and sixth with 5.16 per carry.

The Seattle defense stays in its base of three linebackers on first and second down more than any team in the league, which could make life tougher for Chubb. But the Browns must stick with the run game to take pressure off Mayfield and the embattled offensive line.

Someone is on the receiving end of Wilson’s perfect passes, and that someone is usually receiver Tyler Lockett. He’s 13th in the NFL with 379 receiving yards and 15th with 30 catches, adding three touchdowns. He’s developed into a No. 1 receiver, busting out last year with 965 yards, a 16.9 average and 10 touchdowns.

The breakout continued this season, as he set a career high with 10 catches against Pittsburgh then broke it the next week with 11 for 154 yards against New Orleans.

“He’s sneaky,” Carrie said. “They put him in positions to be successful, whether that’s in the slot, behind the ball, whether that’s at that No. 1 position. He seems to be always the guy that Russell’s going to when he finds those scrambles. So it seems like they have a connection there that is very successful.”

Carrie and Terrance Mitchell are expected to start at corner for the fourth straight game in place of Denzel Ward and Greedy Williams, who are recovering from hamstring injuries. They will have the difficult assignment of sticking with Lockett while Wilson scrambles, and they better be tight because Wilson has pinpoint accuracy.

“I have total confidence in the guys,” Kitchens said.

Seattle’s record in its last 18 games that started at 10 a.m. Pacific Time — the scheduled kickoff for Sunday’s game

Penalties accepted against the Browns, one behind Atlanta for most in the league

Commentary: Browns suffering through identity crisis as they try and decide if they are a good or bad team
Prediction: Browns 27, Seahawks 26