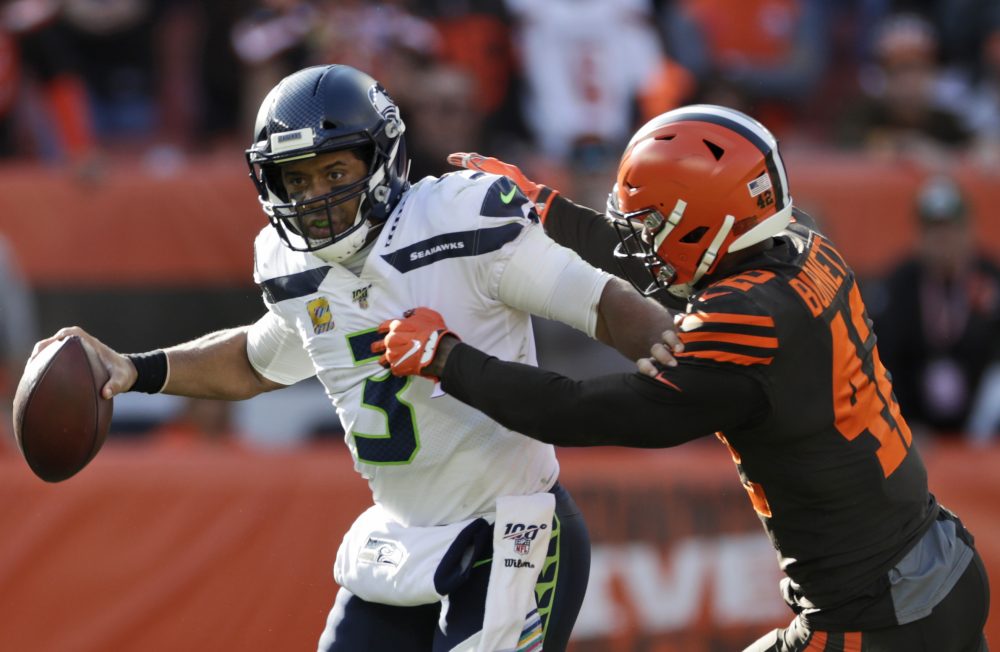 CLEVELAND — Right or wrong, fair or not, the Browns keep getting flagged for penalties.

Cleveland looked like it had cleaned things up in the first half Sunday with just two fouls for 20 yards, but, unfortunately for the Browns, they were flagged seven more times for 63 yards in a 32-28 loss to Seattle at FirstEnergy Stadium.

And while Cleveland may have a strong case on two of those fouls in particular — including one that helped spark Seattle’s go-ahead touchdown drive — the Browns will need to find a way to stop drawing fouls if they’re going to turn things around.

Cleveland entered Week 6 with a league-high 506 penalty yards on 48 flags, which trailed only Atlanta — by one. After Sunday, the Browns tied the Falcons for the league lead in penalties at 57.

“It’s just annoying playing handcuffed,” Browns defensive tackle Sheldon Richardson said. “Watch the film. Every time we get momentum it’s always something. A phantom here, a holding there, whatever the case may be, roughing the passer when the quarterback’s still got the ball in his hands. It’s football. When you leave it up to judgment calls, that’s what happens. You take the game out of the players’ hands and you put it in the referees’, it’s just that simple. It’s football, it’s not meant to be … it’s violent, it’s aggressive, it is what it is. It’s barbaric and people want it to be nice. That’s what it is.”

The Browns looked like they were going to get their offense jump-started after Seattle took its first lead at 25-20 with 6:00 left in the third. Baker Mayfield found Odell Beckham Jr. for an 18-yard completion — except right tackle Chris Hubbard was flagged for illegally running downfield, nullifying the gain and putting the Browns in a second-and-13 situation.

Cleveland responded with a nice screen to running back Nick Chubb, who weaved his way across the field before being tackled just short of the first-down marker. But that play will only go down as a 4-yard completion because receiver Jarvis Landry was flagged for an illegal blindside block, wiping out the big gain and putting the Browns in a second-and-22 situation from their own 13.

“The refs are never an excuse,” quarterback Baker Mayfield said. “I will probably get fined for saying this, but it was pretty bad today. The guy is squared up with him, running at him and he’s lowering his head into Jarvis. What is (Landry) supposed to do? Avoid him? This is not bullfighting. I don’t know. It ticks me off.”

The Browns punted two plays later, but got the ball back thanks to a C.J. Prosise fumble, eventually setting themselves up with a fourth down from Seattle’s 1-yard line. Cleveland lined up with four receivers right and an empty backfield. Mayfield hit Landry on a slant and the receiver reached across the goal line and lost his grip on the ball. The officials ruled that the Browns did not score, but they got another shot because Seattle was flagged for having 12 men on the field.

Coach Freddie Kitchens elected to challenge the ruling, arguing that the ball broke the plane before the fumble. The officials upheld the ruling and the Browns were stuffed on the next play.

“It was pretty obvious to me,” Beckham said of Landry breaking the plane of the goal with the ball. “But that wasn’t the call. We don’t sit here and talk about the referees. I’ve never been one to do that. The call was what it was, respect the call and keep it moving. It’s like complaining about life. You can complain, but is it going to get anything done? There’s nothing that can be said, there’s nothing that we can do right now in this moment to change that call. It’s just the bottom line. You’re wasting energy even talking about it.”

Even though the Browns didn’t score, they forced Seattle to punt from its own end zone. The punt was shanked and the Browns regained the lead on the ensuing drive with a touchdown and 2-point conversion.

“It’s tough,” Chubb said of the Landry non-TD. “We thought we were in. Things didn’t go our way, but we got to keep playing. We ended up getting the ball back and scored. After all that, at the end of the day, it really didn’t matter because we ended up scoring later on. We’ve got to make every play count. It was a tough situation.”

The backbreaker came on Seattle’s go-ahead touchdown drive. Cleveland had pressured Russell Wilson into an incompletion, but safety Morgan Burnett was flagged for a horse collar tackle that gave Seattle a new set of downs at the Cleveland 47. The Seahawks found the end zone nine plays later for a lead they wouldn’t relinquish.

“They didn’t say anything,” Burnett said. “I didn’t even know it was a horse collar. I was already off the field. I didn’t know until I looked on the Jumbotron and they had a flag out there. I felt like I didn’t grab his shoulder pad, but things happen fast out there and I understand that. You’ve got to respect their call and next time I’ve just got to look on the film and see how can I change my approach or something like that.”