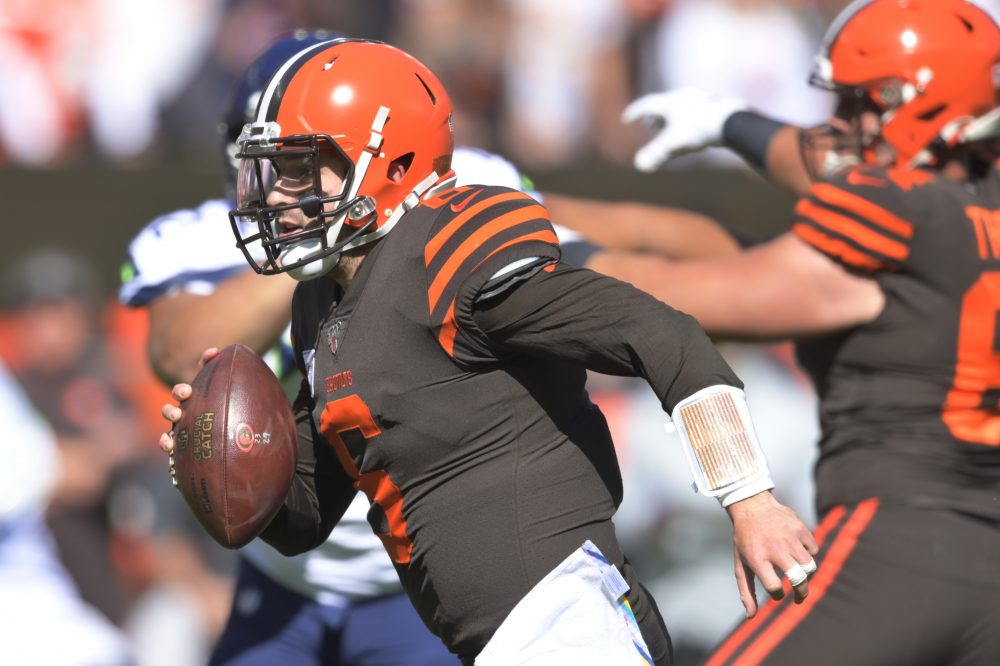 Baker Mayfield looked like his old self early. He even found a way to complete passes to receiver Odell Beckham Jr.

The Browns had every chance to sprint into the bye with a signature win and the kind of momentum that could spark a run to a division title.

They self-destructed with four turnovers, a blocked punt and nine penalties, continuing a disturbing trend that has followed Freddie Kitchens through his first six games as a head coach.

The Browns stumbled and bumbled into the bye with a 32-28 loss to the Seahawks on Sunday at sunny and windy FirstEnergy Stadium.

“You get what you deserve,” said defensive end Myles Garrett, who had two sacks to bring his season total to nine, tied for the most in the league. “You get what you work for, and today, we didn’t make the plays.”

“We are sick of losing,” Mayfield said.

Mayfield threw three interceptions, giving him a league-high 11. Two were off the hands of his receivers, but both passes were behind them. The usually reliable Nick Chubb rushed for 122 yards and two touchdowns but lost a fumble. The punt protection served as a sieve, giving rookie Jamie “The Scottish Hammer” Gillan no chance on the block.

“I don’t feel like this game should’ve been close today,” free safety Damarious Randall said. “We made it close and we let them stick around and they found a way to win and just tip your hat to them and they made the plays.”

All the blunders erased a brilliant start that saw the Browns burst to a 20-6 lead six seconds into the second quarter. They scored on their first three possessions — a 7-yard Chubb run, a 10-yard Mayfield scramble for the first rushing touchdown of his career and a 31-yard pass to tight end Ricky Seals-Jones.

“We just wanted to hurry up and keep going and get the gas pedal going on those guys because we knew if we keep the ball in our hands we can execute plays and make plays and no one could stop us,” said right tackle Chris Hubbard, part of a line that didn’t allow a sack or quarterback hit.

The offense stopped itself, which has become routine. The four turnovers took away scoring chances while giving the ball to the dangerous Russell Wilson and the efficient Seahawks offense.

Mayfield’s final interception came on Cleveland’s last offensive play with 2:41 left, as backup running back Dontrell Hilliard couldn’t handle the pass behind him and had it go through his hands to linebacker K.J. Wright. The Browns needed a winning drive because the defense couldn’t protect the 28-25 lead taken minutes earlier.

Wilson bought time outside the pocket, found open receivers and led a nine-play, 79-yard drive finished with a Chris Carson 1-yard run. Carson rushed for 124 yards and a 5.2 average, and Wilson was 23-for-33 for 295 yards, three sacks, two touchdowns and a 117.6 rating. He hasn’t thrown an interception in 207 passes.

The game-changer came at the end of the first half with the Browns up 20-12. They were at the 10-yard line with 1:36 left, and Mayfield threw into coverage for receiver Jarvis Landry on a skinny post. The pass was slightly behind him, tipped by cornerback Shaquill Griffin and intercepted by safety Tedric Thompson.

The Seahawks went 88 yards in eight plays for a touchdown to pull within 20-18 when the 2-point try failed.

“I thought about scoring, using my three timeouts to get the ball back and score again,” Kitchens said of his decision to rush to the line before the interception. “That was the mindset I was in.”

The Browns also were stopped inside the 1 on fourth down in the fourth quarter, as the red zone struggles persist. They have scored touchdowns on 11 of 21 trips inside the 20-yard line.

“Too many mistakes in the red zone,” Kitchens said. “Can’t overcome all of those. Still had a chance to overcome them.”

But they didn’t. And they walked out of the stadium knowing the uphill climb that awaits following the bye, starting with a trip to New England on Oct. 27.

“This is a team that could possibly be 6-0 or 5-1, but that’s not our record,” said Beckham, who caught six passes for 101 yards with a drop. “We’re 2-4 and we’re 2-4 for a reason. That’s something we need to figure out so down the backstretch this stuff won’t happen.

“I hate trying to be like that, but it’s a long season. Teams catch on fire, teams win five games in a row, but it’s not going to happen like that. We have to figure out a way to eliminate all of those things.”

The Browns have yet to reward the fans for their support and excitement. They’re 0-3 on the lakefront and don’t return until Nov. 10 against Buffalo.

“Losing at home sucks,” Mayfield said. “It hurts, especially when it was a game that we really felt like we needed.”

The frustration was obvious, but the Browns also remained steadfast that they have the talent to win and can still accomplish their goals, which start with making the playoffs.

“Big-picture mindset, we still have everything in front of us, but right now, this one hurts,” Mayfield said. “We still have five division games left. There are some very important road games later in the year. We will see what we are made of.”

“It’s still a long season, but we’ve got to turn it around … soon,” defensive tackle Sheldon Richardson said.

He was among the most vocal critics of the officiating, saying the Browns played “handcuffed.” The Browns were penalized nine times for 83 yards, with a few of them highly questionable. They are tied with Atlanta for most penalties in the league with 57.

“We just have to recognize the critical errors that were made and correct those. We were pretty efficient when we didn’t kill ourself.”