Commentary: Officiating was awful, but Browns were worse as they blow chance for 1st home win 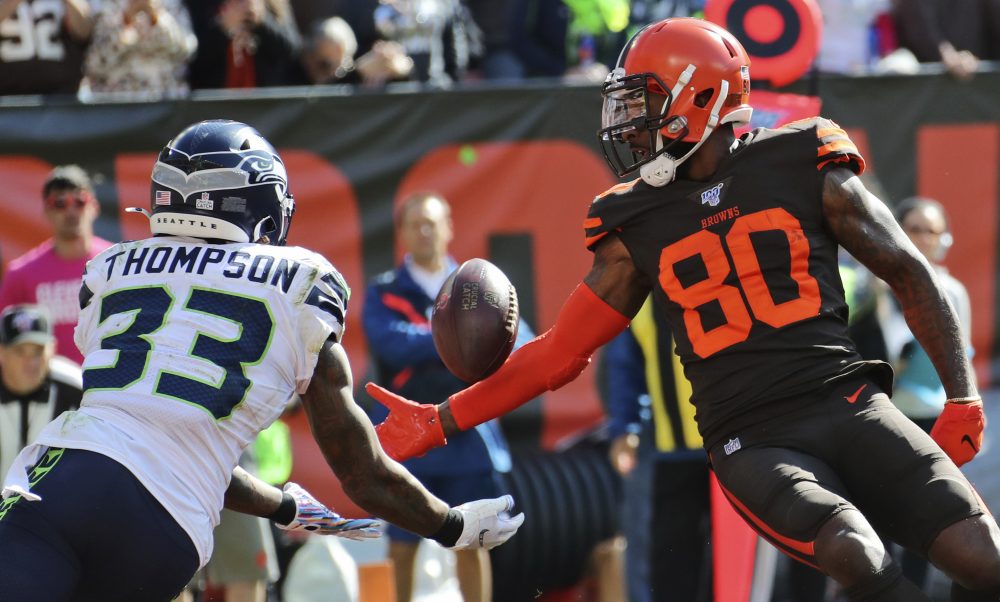 It ended with the ultimate indignity: the visiting team taking a knee on the home team’s 4-yard line. The dreaded mercy knee.

So ended the worst officiated NFL game this week, this month, this year or ever. Take your pick. Then, if it makes you feel better, go ahead and rant about it, rail about it, howl, hoot and holler about it.

You’re right. The officials were officious.

But so were the Browns.

They lost another winnable game. Leading 20-6, they lost 32-28 to Seattle. They’re now 0-3 at home. Overall, they’ve played six games and lost all but two of them.

“You are what your record is,” said coach Freddie Kitchens, whose kitchen is getting warmer by the week.

The loss was less a game and more a spectacle, thanks to an overmatched officiating crew that called a dizzyingly number of penalties, some of which actually were penalties.

One that wasn’t was a crucial illegal blindside block called on Jarvis Landry that has to be in contention — admittedly this is a crowded field — for worst call in an NFL game this year. Landry was face-to-face with the defender when he made the block.

At one point, referee Adrian Hill was so discombobulated he announced a penalty while facing the wrong side of the stadium, then realized it, turned around, said, “and now for those watching on TV,” and repeated the announcement of the penalty that really wasn’t a penalty.

It was an unintentionally funny moment in an otherwise chaotic game in which the officials and the Browns vied with each other for worst performance of the afternoon.

To wit: Early in the fourth quarter, with the Browns trailing 25-20 at the Seattle 1-yard line, the following happened in the span of just one minute of game time: Landry caught a 1-yard pass from Baker Mayfield, extended the ball over the goal line for what should have been a touchdown, but was instead ruled a fumble when the ball was knocked out of Landry’s hand after he broke the plane of the goal line.

Seattle was called for too many men on the field, but not before Kitchens challenged the call that Landry didn’t score, lost the challenge and a timeout, as the Browns turned the ball over on downs.

After a shanked Seattle punt, a 3-yard TD run by Nick Chubb followed by Mayfield hitting Demetrius Harris with a pass for the 2-point conversion, the Browns led 28-25 with nine minutes left in the game.

Their first home victory was sitting there on a tee for them, but the Browns defense whiffed. With sack-master Myles Garrett, curiously, observing the first four or five plays from the sideline, the Browns defense gave up a nine-play, 79-yard, two defensive penalties, game-winning touchdown drive by the Seahawks.

Just like that, a winnable game disappeared down the rabbit hole of self-destruction. At one point the Browns led 20-6, then were outscored 26-8 the rest of the way, thanks to four turnovers, a blocked punt and nine penalties for 83 yards.

“I’m not commenting on the officiating. You guys saw the game,” said Kitchens, grimly.

Yes, the officials were officious.

But Kitchens’ team was worse.

For all their supposed star power — Odell Beckham finally showed up in this game — the Browns are still a team trying to learn how to win. Blame the officials all you want, but don’t bury the lead. The lead is that the Browns didn’t lose because of bad officiating. They lost because they did what bad teams do: lose a winnable game.

In other words, you can’t continue to do what the Browns continue to do in too many games this year, with the Baltimore game being the only exception. They remain an undisciplined, overly emotional, well-intentioned but directionless mess.

Kitchens said many of the penalties are due to players playing “with emotion instead of passion.”

There were occasional flashes of passionate, penalty-free non-futility. The construction of that 20-6 lead included a three-play, 92-yard touchdown drive that only took 85 seconds, ending with a 31-yard TD pass from Mayfield to Ricky Seals-Jones.

But the Seahawks shredded the Browns defense for 454 yards, 79 of which came after the Browns took that 28-25 lead, and Seattle responded by marching nearly the length of the field for the game-winning score.

Mayfield, who played much of the second half with a sore hip, had an up-and-down day, completing 22 of 37 passes for 249 yards and one touchdown, three interceptions, but — this is significant — no sacks.

“We were pretty efficient when we didn’t kill ourselves,” said Kitchens.

But a loss is a loss, and this was another one.

And it’s not because of the officiating.

Prediction: Browns 27, Seahawks 26
Seahawks 32, Browns 28: The breakdown — thumbs up, thumbs down, the matchups