Mailbag: Would you still make the trades with the Giants? Why is Eric Kush still playing? Why aren’t they using 2-minute offense? 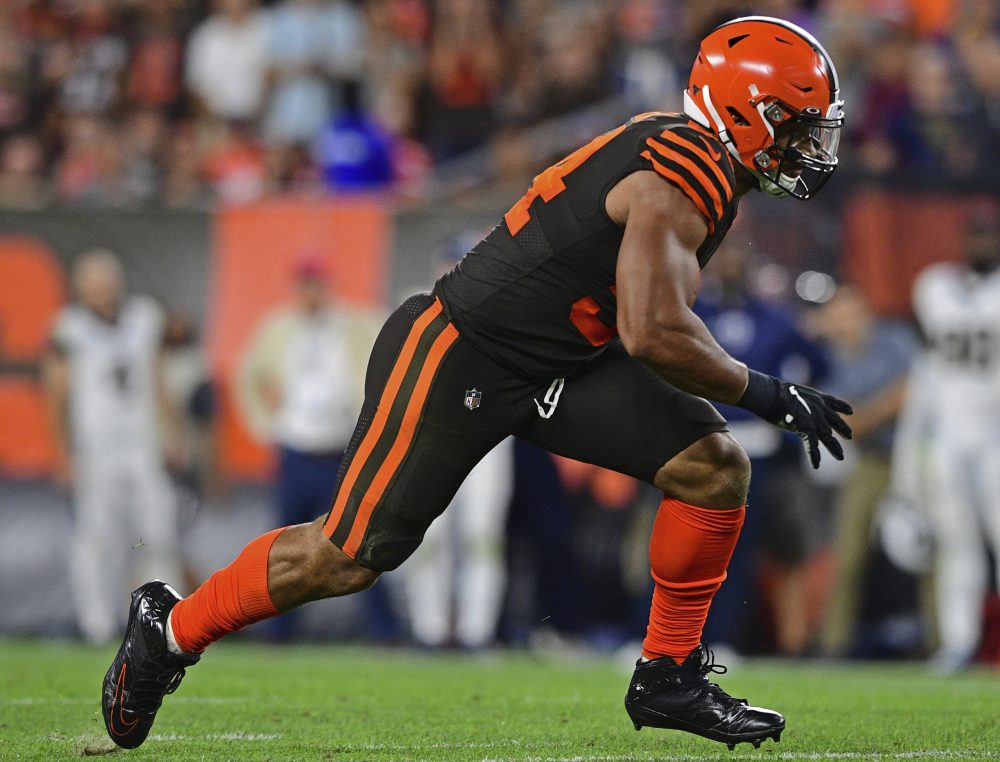 A: Getting right to the heart of the matter on a Sunday morning.

If you went off production through five games, it’s a no-brainer. You wouldn’t trade all those assets to the Giants for a receiver with two catches in each of the last two games and one touchdown overall and a defensive end with one sack. But I think it’s too small of a sample size.

I was a fan of the trades in March and I’m not going to change my opinion already. But I see why you’d ask.

To me, we have to break the deals into two. Let’s start with the latter — Beckham for Peppers and the draft picks. I believe Beckham is too talented to be held in check much longer. And I can’t understand why it’s taken so long for the Browns to figure out how to use him properly. I liked Peppers, but he’s not a difference-maker, and you never know about draft picks. Give me a top-five receiver in his prime any day.

The Vernon-for-Zeitler deal made all the sense in the world in March. You would trade a quality right guard for a quality defensive end anytime. The problem: Vernon hasn’t had the impact of a quality end. I’m less optimistic that will change than with Beckham, and the deal looks so much worse because Austin Corbett couldn’t handle the job and Eric Kush has struggled at right guard. And it’s fair to wonder if Ogbah is better than Vernon. Of course, the Browns got safety Eric Murray for Ogbah, and he’s been solid, so that must be factored in.

Given all of that, I understand the skepticism but think patience is necessary. If Beckham looks like himself soon, there will be way less second-guessing.

Q: Why isn’t Wyatt Teller or Justin McCray replacing one of the worst guards in football in Eric Kush? Not just my opinion but backed up by PFF with a 44 grade and ranked 56th out of 58. I would really like to know this.

A: I believe this question is being asked within team headquarters, as well. I get the feeling the coaching staff trusts Kush more than the new guys. That’s natural given his time spent with the team during the offseason and preseason, as opposed to a couple of guys added right before the season. But Kush’s struggles seemingly beg for a change. Perhaps that will come during the bye.

Another factor is the knee injury that has sidelined Kendall Lamm since the opener. Without their backup swing tackle, the Browns have had McCray in that spot, so they probably didn’t want to start him at right guard with the possibility of moving him to tackle if an injury happened.

All of this reinforces how big a disappointment that Austin Corbett wasn’t good enough to win the right guard job. He was the No. 33 pick in the 2018 draft.

Q: Anything or anyone in particular you are keeping a watchful eye on today, Scott? I’d like to see a bounce-back game from Steve Wilks and his defensive line.

A: D-line is a great place to start. If the front four can dominate — which is a reasonable expectation for such a talented group — the Browns have the chance to slow down Russell Wilson and the Seattle offense.

I’m also watching how the O-line rebounds from a terrible performance against the 49ers. The Seahawks D-line isn’t as good as San Francisco’s, but Jadeveon Clowney and Ziggy Ansah are proven players.

Finally, I expect a big game from Odell Beckham Jr. after Jarvis Landry dared the coaching staff to throw him the ball.

Part of it is they’ve struggled to possess the ball and if you go hurry-up, it opens the door for a quick possession and putting the defense on the field again too soon.

But I think the main reason is something coach Romeo Crennel used to say: You have to get good at the basics before trying something special. I get the sense Freddie Kitchens wants to see improvement from the standard offense before adding the two-minute element. But having success with tempo could prove to be the spark for the rest of the offense.

Q: Will rookie offensive lineman Drew Forbes be back this year?

A: There’s a chance.

I’ve seen him around and expect him to be healthy in time to return for Game 9, but teams are allowed to bring back only two players from injured reserve. One of the spots seems reserved for tight end David Njoku (broken wrist) and the second spot will depend on other injuries. Quarterback Drew Stanton and Forbes are the leading candidates right now.

But it’s another mystery how a guy that opened eyes as a rookie last year can be stapled to the bench in Year 2. Coach Freddie Kitchens noted the depth at end when asked about Avery during the week, but there has to be more to it than that. Yes, Chad Thomas has improved in his second season, but Avery either isn’t a fit in coordinator Steve Wilks’ scheme or did something to upset the coaches.

A: Still waiting on inactives but I don’t expect them to play. I think the team wants the extra week of the bye to make sure they’re 100 percent.

Mailbag: Is Trent Williams a trade possibility? Where are Baker Mayfield’s checkdowns? Who will return from IR?
Mailbag: Does Nick Chubb need 25 carries for upset of Patriots? What’s up with Genard Avery? And what about Rashard Higgins?