Seahawks 32, Browns 28: The breakdown — thumbs up, thumbs down, the matchups 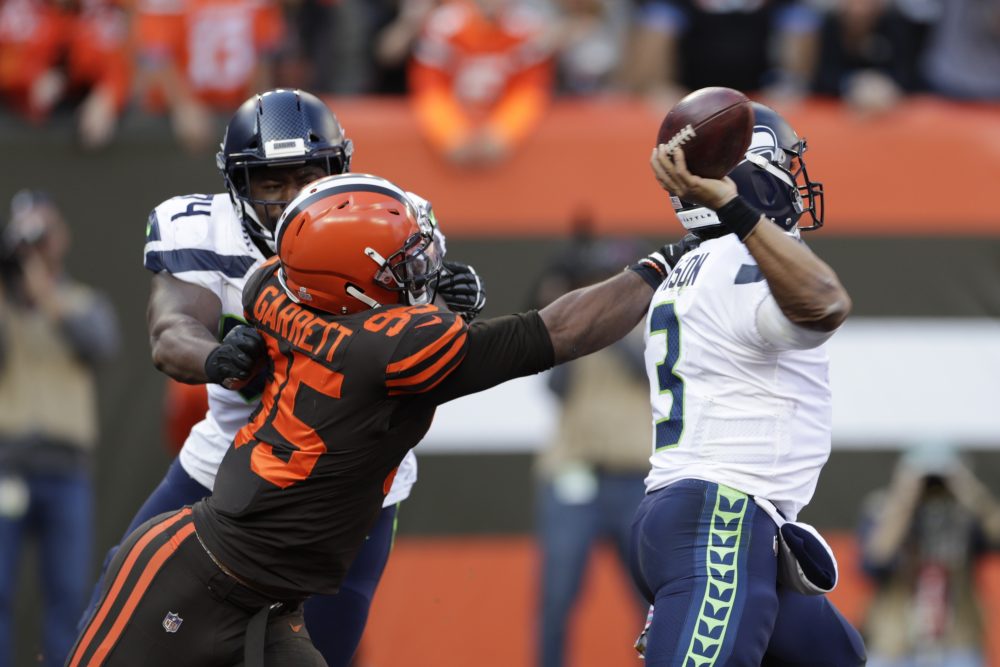 He may get an MVP trophy this year to add to his Super Bowl ring.

Wilson again demonstrated he belongs among the elite of the elite when it comes to NFL passers. He made every big play when needed, including leading the winning drive late in the fourth quarter. He was 23-for-33 for 295 yards, two touchdowns and a 117.6 rating. Believe it or not, his season rating dipped to 124.7 after the performance.

“Russell was exquisite again,” Seattle coach Pete Carroll said. “He found us ways to make plays — two touchdowns, and ran one in as well. He is just making stuff happen, and it has to be hard for the other side to try and figure out how you are going to stop the guy. He just keeps making plays.”

Wilson ran nine times for 31 yards, including a 16-yard scramble for a touchdown when the Browns left the middle wide open. He was just as much trouble when scrambling behind the line, keeping plays alive long enough for his receivers to come free.

Wilson’s most impressive play came at the end of the first half. On third-and-5 from the 17, he stood in the pocket, took a huge hit in the midsection from linebacker Joe Schobert and delivered a strike to the right corner of the end zone to receiver Jaron Brown.

“I did not see the catch. I got crushed on that one,” Wilson said. “We checked through the play and changed it a bit. I thought we had a chance to isolate JB, and sure enough, it worked out the way we wanted it to.”

The buck stops at the top.

Growing pains were expected with the first-time head coach, and they’re hurting the Browns. Not everything is his fault — by any stretch — but he’s not doing enough to put his players in the best spots to succeed, or bail them out when they fail.

Kitchens had the right offensive game plan, which was evident with Odell Beckham Jr. getting involved and three touchdowns on the first three drives. He’s not to blame for the execution on the turnovers, but he put Baker Mayfield in a difficult spot on his second interception, which was a turning point in the game.

Four turnovers, blocked punt sink Browns in 32-28 loss, as they head into bye at 2-4

The Browns led 20-12 when they got the ball with 5:02 left in the first half. They weren’t in a hurry, methodically marching down the field. They had reached the 12-yard line at the two-minute warning, and after a Nick Chubb run for 2, Kitchens called for the hurry-up offense. Mayfield rushed the team to the line and threw into a tight window in the end zone. The pass was a bit behind Jarvis Landry, tipped and picked.

“I thought about scoring, using my three timeouts to get the ball back and score again,” Kitchens said of the rush. “That was the mindset I was in.”

He should’ve used as much clock as possible to limit Seattle’s chances for a score. With Wilson at the helm, you can’t assume a stop. Kitchens increased the pressure on the turnover-prone Mayfield by calling for a pass into the end zone when slow and steady was the better approach. The decision looked much worse after the Seahawks went down the field for a touchdown.

The sequence proved largely irrelevant after Michael Dickson shanked a punt and the Browns used the short field to score the go-ahead touchdown, but it was crazy enough to dissect.

The Browns trailed 25-20 and had third-and-goal at the 1 with 10:52 left in the game when all hell broke loose. Mayfield tried a fade to Beckham but it wasn’t close for an incompletion. As the Browns snapped the ball on fourth down Carroll was trying to call timeout because the 12th defender couldn’t get off the field in time. He wasn’t granted a timeout and a flag flew.

That was just the beginning of the drama.

Mayfield threw a quick in to Landry, who extended the ball for the goal line and lost it into the end zone. The Browns recovered, but a team can’t advance a fourth-down fumble, so the ball went back to the 1 and it would’ve been Seattle’s ball. The 12-men-on-the-field penalty gave the Browns another shot, but first Kitchens challenged that Landry — who was screaming for Kitchens to throw the red flag — had reached the ball across the goal line before he fumbled. A replay shown on the scoreboard seemed to prove his point, but the challenge was denied.

“Definitely one of the angles on there showed that he scored,” Mayfield said.

A Chubb run was stuffed on the second fourth-down try.

Rushing yards given up by the Browns in the last two games. They allowed the Seahawks to rush for 170 with a 4.5 average and two touchdowns after the 49ers rushed for 275 Monday night.

“I do feel like we are improving, but you are what your record is so you are 2-4. That is what we are right now.” — Browns coach Freddie Kitchens

The start was nearly perfect, but the momentum disappeared in a cloud of turnovers. Baker Mayfield isn’t completely at fault for his three interceptions, but his ball placement wasn’t what it needed to be and hasn’t been all season. The line rebounded by not giving up a sack or quarterback hit.

Russell Wilson threw for 295 yards and two touchdowns, and Chris Carson rushed for 124 yards and a TD.

Myles Garrett had two sacks, but the defense couldn’t get a stop when needed in the fourth quarter. The Seahawks scored the go-ahead touchdown, then ran out the clock on their next drive. The run defense needs to improve in a hurry.

The Seahawks forced four turnovers, which masked the 406 yards gained by the Browns. The final interception sealed the win.

Both teams were up and down. The Browns got a 74-yard kickoff return from Dontrell Hilliard, but Jamie Gillan had a punt blocked when the protection failed and Austin Seibert missed an extra point.

Jason Myers missed an extra point for Seattle, and Michael Dickson shanked a punt from his end zone to set up Cleveland’s go-ahead touchdown in the fourth quarter.

Freddie Kitchens had a great game plan early but blew the clock management at the end of the first half and his players can’t stop committing penalties. They were flagged nine more times and are tied for the league lead at 57.

Pete Carroll’s staff made good adjustments throughout the game and his team never stopped believing. He knows how to lead a winning team.

Commentary: Officiating was awful, but Browns were worse as they blow chance for 1st home win
Commentary: Bye week couldn’t have come at a better time for team that’s running out of alibis