Freddie Kitchens challenges players to become a team, says “all of this talent has gotten us 2-4” 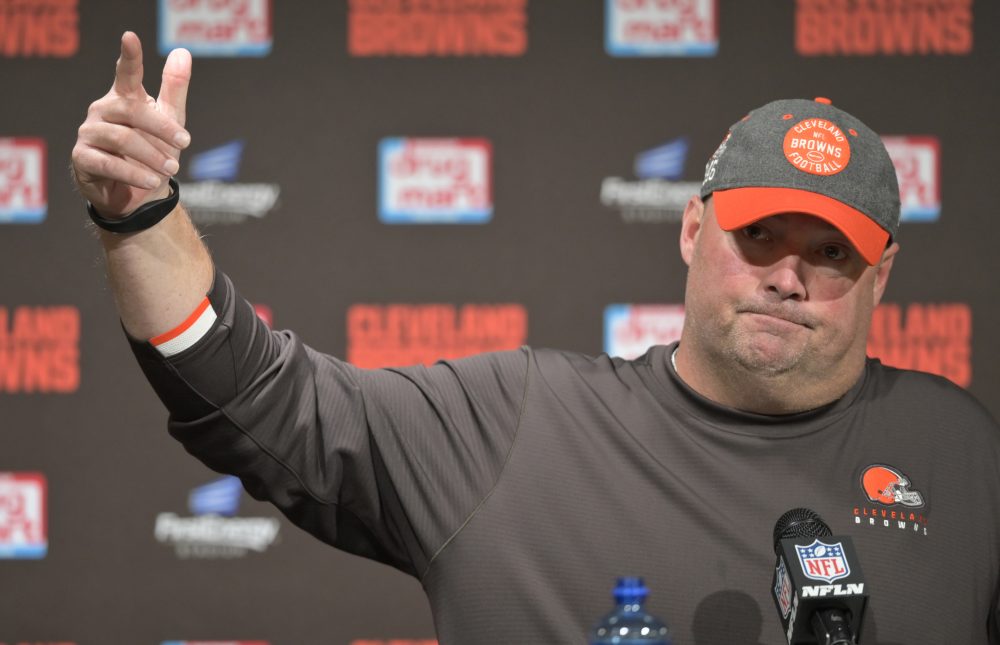 BEREA — The talent acquired by general manager John Dorsey was the reason for the hope and excitement entering the season.

After a failure to meet expectations, it’s become a source of frustration and sarcasm.

“All of this talent we have, that has gotten us 2-4, OK?” coach Freddie Kitchens said Monday. “Now let’s try something different. Let’s try to be a team and see if we can be better moving forward.”

The Browns have the bye this week, but Kitchens was in no mood to relax coming off a 32-28 loss to the Seahawks on Sunday that dropped the home record to 0-3. He was fired up and challenged his players in a meeting, and in the media, to come together with a common purpose.

“At some point we have to become a team,” he said. “The difference between a group and a team is significant. To be a team, you have to do your job and then you bring it together collectively and then you become a team and you trust the guy beside you that is going to do their job.

“I think our guys are committed to doing what they are supposed to do — coaches, players, everybody — to becoming a team. We tried to do that during training camp, but you do not figure that out sometimes until you hit adversity. Hopefully, when we go to New England, we will be a team.”

The Browns have plenty to get straightened out before facing the unbeaten and reigning Super Bowl champion Patriots on Oct. 27. They had four turnovers, a blocked punt and nine penalties Sunday, self-destructing after taking a 20-6 lead.

But the focus Monday was on the big picture, as the Browns try to process the underachieving start.

“Very stunned,” cornerback TJ Carrie said of being 2-4. “And I say that because we have all the talent, but in this league, talent only goes so far. You have to be willing to believe in one another. You have to be able to go out there and execute.

“You couldn’t tell me with all the talent that we have on this team that we wouldn’t be in a better situation.”

Receiver Jarvis Landry was on the same page as Kitchens and Carrie. He said last week the Browns may not be as good as they thought they were, and didn’t back down after the gut-wrenching loss that prompted him to bolt the locker room and blow off his league-mandated interview with the media.

“There was always the phrase that talent wins games, teams win championships. That’s always stuck with me because no matter who’s on paper or whatever, it really doesn’t mean anything when you step out there,” he said after apologizing for not talking to reporters after the game. “So I’ve always understood that it’s not about talent. I’ve played on talented teams and we’ve won nothing, and I’ve played on teams that we were disciplined, accountable, we had a team full of leaders — my only playoff team.”

“Pretty much the same team, but we lacked all of those traits that got us to where we were before,” Landry said. “And we started feeling entitled.”

As much as Kitchens and the players talked in the run-up to the season about ignoring the hype, overconfidence has been an issue.

“You look at the paper and you’re like, there’s no way (you don’t win),” Landry said. “But now just seeing how the sacrifices that we have to make to be able to continue to be on the same page, the trust, the accountability that we have to have for each other and buy in.

“That’s the biggest thing, we have to continue to just buy in to what Coach Freddie wants and what he’s trying to do and trust that the end result, it’ll be ultimately in the Super Bowl.”

Carrie agrees the trust factor must extend from the players to the coaching staff. That was in doubt last week when Landry questioned Kitchens’ play calling that had failed to get the ball to receiver Odell Beckham Jr., and defensive end Myles Garrett criticized coordinator Steve Wilks’ game plan in the 31-3 loss to the 49ers.

“The gelling comes with us all trusting within one another and believing everything the coaches are telling us, because I feel like they’re putting us in the best situation to be successful,” Carrie said.

Kitchens saw progress in the preparation last week and thought it carried over to the game — until it was obscured by all the mistakes.

“I think we had a lot of improvement yesterday. I do,” Kitchens said. “The result is not what we wanted, but we did find out a lot about a lot of our guys that are willing to commit to doing their job.

“I think we are going to become a team. I think you do not find that out until you get kind of at the crossroads. I think it is time to make a decision.”

The talent can’t be discounted entirely. The Browns remain convinced they can meet their goals, which start with a playoff berth, because they believe if they fix their problems they can beat anyone.

It’s still a big if.

“We need to find ways to continue to play to our potential,” Landry said. “That’s the biggest thing.”

“We haven’t played our best ball yet, and that’s something that I feel like as a whole, as a unit, as everyone in this building that goes out on that field, we have to stick together in order to succeed in that goal,” Carrie said.

Even with all the turnovers and wasted opportunities, the Browns had the chance for victory in the final minutes. A defensive stop would’ve won the game. And when that didn’t happen, a touchdown would’ve gotten it done.