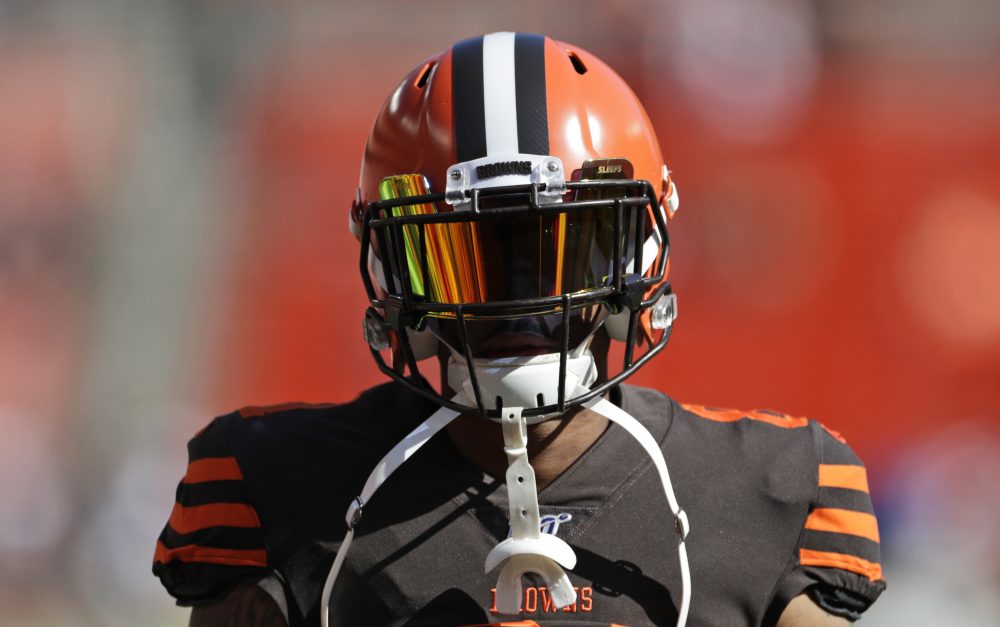 BEREA — Receiver Rashard Higgins was nowhere to be found Sunday during the 32-28 loss to the Seahawks, but coach Freddie Kitchens insisted he wasn’t in his doghouse.

“No, he is not,” Kitchens said Monday.

Higgins, who had been inactive for four games with a knee injury, didn’t play a snap against Seattle despite being a full participant in practice last week. He and backup quarterback Garrett Gilbert were the only active players who didn’t play.

Antonio Callaway got all the 47 snaps as the No. 3 receiver behind Odell Beckham Jr. and Jarvis Landry, catching two passes for 222 yards.

“Last week was (Higgins’) first week truly back, and I thought Antonio had a good week of practice,” Kitchens said. “Hig should have played some in the game yesterday, but the situation didn’t arise where he was in the game. We were moving the ball with three wides and one tight end.”

Higgins spent the preseason as the No. 3 wideout, with the team knowing Callaway would be suspended for the first four games. Callaway then missed the last month of camp with a high ankle sprain before serving the drug suspension.

Callaway played right away when eligible, returning Oct. 7 against the 49ers and playing a terrible game. He struggled to get lined up properly, was called for a false start and turned a touchdown into an interception with a goal line bobble. He was benched for the second half.

But Kitchens stuck with him ahead of Higgins, who has chemistry with quarterback Baker Mayfield and caught 39 passes for 572 yards and four touchdowns last week.

“I thought an extra week (would help),” Kitchens said of Higgins. “He was there for a certain package of plays, we didn’t get to that package and he didn’t play.”

Kitchens was asked if he has a doghouse.

“Do I get mad at somebody? Yes,” he said. “People will not get on the field for not doing their job.”

Kitchens doubled down on how he managed the final minutes of the first half.

The offense rushed to the line after the first play following the two-minute warning, and Mayfield threw an interception into the end zone from the 10-yard line.

Kitchens reiterated his plan was to score, use all three timeouts while stopping the Seahawks, then score again. All in the last 1:36 of the half.

“It is always second-guessed. I understand that. I accept that, I would expect you to ask that question, but you just expect the answer you are getting in return.”

The decision to hurry looked worse after the Seahawks followed the interception with a touchdown drive, but Kitchens noted “we had an open receiver.” Mayfield threw behind Landry, and the tipped ball was picked.

“Obviously clock management is very important,” Landry said. “But we felt like we had them on their heels all day. We had our opportunity to score right there.

“I feel like I ran a pretty good route, had an opportunity, got inside, I just didn’t make the play. I’ve just got to make the play.”

Of all the questionable officiating calls during the game, the 15-yard blindside block on Landry was the worst. He was facing the correct direction and simply stood his ground when the defender ran into him.

He said it instantly made him more hesitant.

“The very next play Baker scrambles and I go to block (Bobby) Wagner and I pretty much just take a charge and end up hurting my ankle because I’m trying to not block like I can block,” Landry said.

He said he’ll use the bye to get the ankle ready and will be “good.”

Landry flashed some sarcasm when asked if the officials emphasized the blindside block rule during their summer visit.

“They did stress the emphasis about going back into a play or going back toward your end zone,” he said. “They didn’t stress the point where they say if a defender is lowering his head and running at you and then you just stand your ground because you knocked him down that it will still be a penalty on you, they didn’t explain that part. So I guess that’s why I got flagged.”

He also disagreed with the fourth-down fumble call on the goal line, believing he stretched the ball into the end zone. He thought the replay shown on the scoreboard proved it.

Cornerback TJ Carrie also had a bone to pick with the officials after he pried the ball from the arms of receiver DK Metcalf on the game’s final drive. The official ruled Metcalf had control before Carrie dislodged the ball, which landed out of bounds.

The completion on third-and-7 gave the Seahawks a first down with 2:26 left and allowed them to run out the clock. Kitchens was out of timeouts, so he couldn’t challenge.

“I thought it was an incomplete pass,” Carrie said. “I felt like in this league that you had to secure the ball all the way down to the ground, and he got two feet in, but the ball came out.”

Mayfield said his left hip was sore following the game after an awkward third-quarter scramble. He briefly went to the locker room but didn’t miss a play.

“He is fine,” Kitchens said.

The Browns were scheduled to practice Tuesday and Wednesday and Kitchens didn’t think Mayfield would miss any time.