Rashard Higgins frustrated he didn’t play last 2 games after getting healthy, believes he could’ve made difference 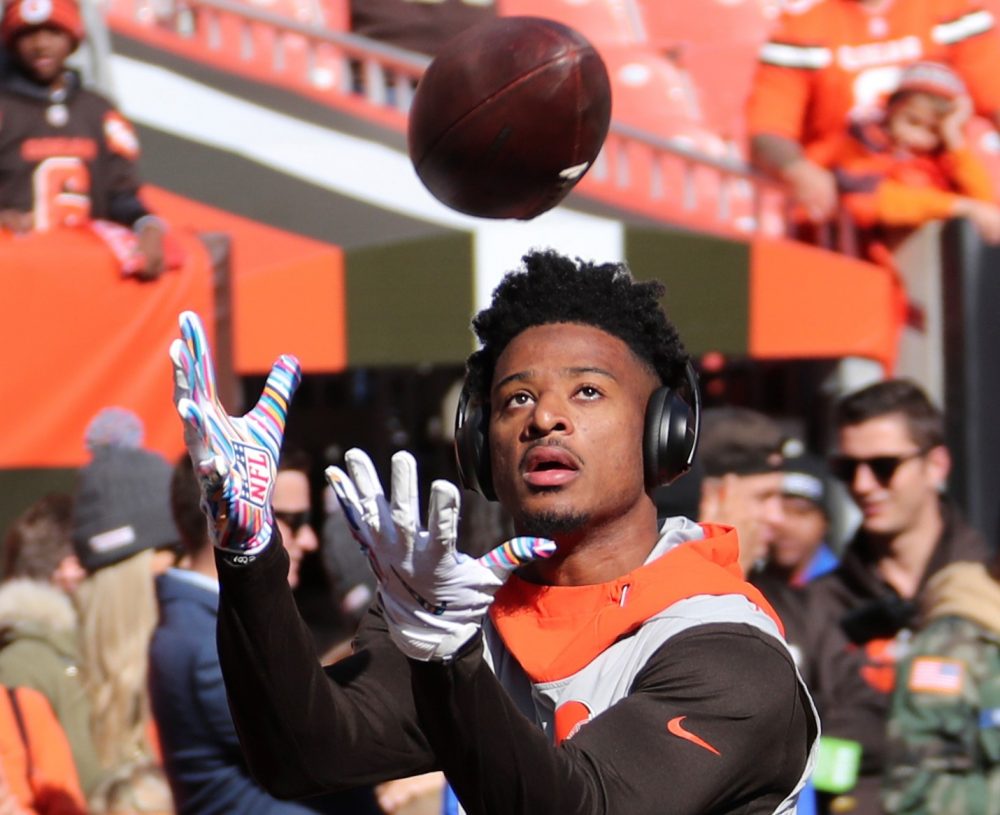 He sprained his medial collateral ligament in the opener while blocking. After a month rehabbing and practicing, he felt healthy enough to play Oct. 7 against the 49ers but was inactive, as coach Freddie Kitchens deemed him not ready. Then he practiced fully all last week and was active Sunday for the game against the Seahawks but didn’t leave the sideline for a single snap.

“I was surprised, yeah,” Higgins said Tuesday of the inactivity. “I just know this offense needs me, so I’m doing all that it takes to get back on the field and I should be out there next game.”

Higgins, who had 39 catches for 572 yards and four touchdowns last year, can’t believe he’s played only a half of football and the season is six games old.

“It is frustrating,” he said.

Kitchens used Antonio Callaway ahead of Higgins as the No. 3 receiver behind Odell Beckham Jr. and Jarvis Landry in the 32-28 loss to Seattle, and said Monday the specific personnel package that included Higgins wasn’t called upon.

“I guess that’s play calling,” said Higgins, who stood next to receivers coach Adam Henry during the game waiting for a chance. “Honestly, I just didn’t get in, man. I don’t know why.

“I feel I could’ve made a difference.”

“The reason Hig didn’t play was we were coming into a bye week, and I think one more week would benefit him greatly,” he said.

Kitchens and Higgins both spoke as if he’ll return Oct. 27 at New England.

Kitchens appreciates Higgins wanting so desperately to return to action.

“Nobody ever questions Hig’s heart, motivation, his desire to win, his desire to do things the right way, all those sorts of things,” he said. “So I’ll be glad when he’s back full time.”

Kitchens has pointed to receiving targets not being in the right spot at the right time as negatively affecting quarterback Baker Mayfield through the 2-4 start. Higgins isn’t the fastest or the strongest receiver but tries to make up for it by mastering the details. He’s also got strong on-field chemistry with Mayfield.

“I feel like I’m somebody Baker can rely on and when I’m in the game I can make a difference,” Higgins said. “It’ll show next game.

“Every day we’re out there at practice, trying to get timing down on little things. Half the time I’m the one that when he’s scrambling he finds me. It’s just one of those things.”

He has no doubt the chemistry has survived his five-game absence.

“It’s just always there. Like salt and pepper, man,” he said.

Henry touted the versatility of Higgins and called him “integral” to what the Browns are trying to do on offense.

“Just a rapport with Baker and he’s a guy who’s the law of attraction — the ball finds him,” he said. “He’s just got a little knack. He’s one of the guys who kind of finds little spots to get into in space.”

Higgins said he’ll “most definitely” be hungrier when he plays against the Patriots and believes he can help right away.

Callaway was a draft pick of general manager John Dorsey, who inherited Higgins. Callaway is much faster than Higgins with greater potential but isn’t as trustworthy.

“Callaway’s speed does add an element to the game that not a lot of people have,” Kitchens said. “But again, the speed does nothing unless you are in the right place and you catch the ball.”

Henry said the Browns could rotate Callaway and Higgins as the No. 3 during a game.

“It never has to be either/or. Never,” he said.

Higgins, a fifth-round pick in 2016 who was waived and re-signed in 2017, is scheduled to become a free agent after the season and needs as much playing time as he can get.

“It’s frustrating, but I know my chance is still going to come, so there’s better days ahead,” he said.