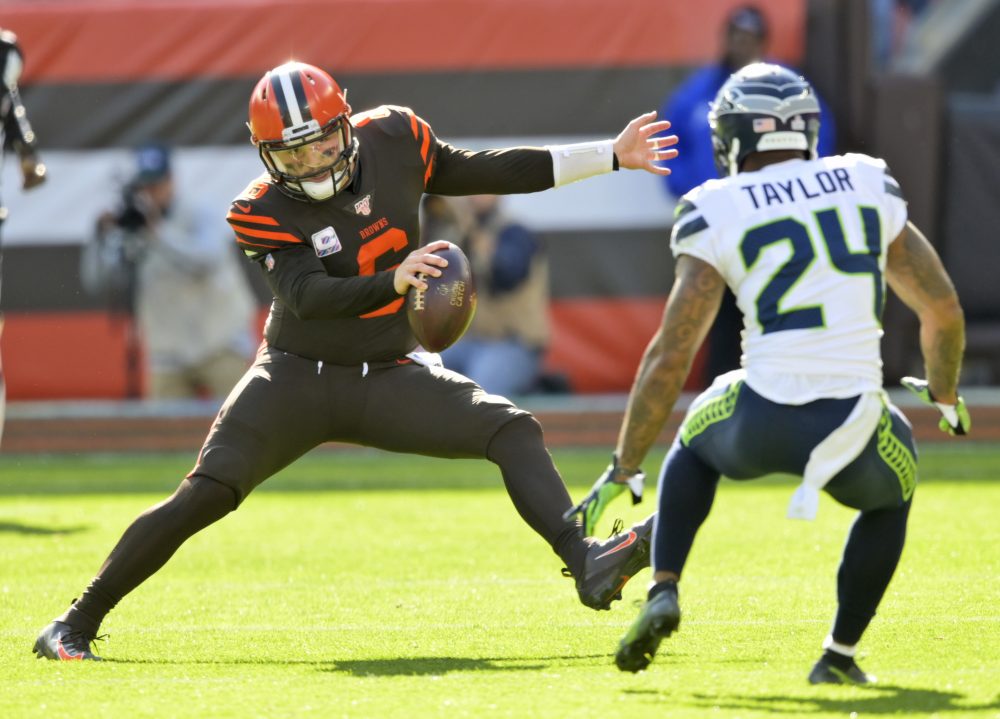 BEREA — The bye came at a good time for quarterback Baker Mayfield.

He didn’t throw during practice Tuesday, resting the left hip he injured Sunday on a scramble against the Seahawks.

“Just giving him a break physically,” coach Freddie Kitchens said. “Just trying to get his body back a little bit.”

With the bye this week, the practice was an extra one and Mayfield has time to rest and recover. The Browns don’t play again until traveling to New England on Oct. 27, and Kitchens said he had no doubt Mayfield would be ready to face the Patriots.

“We’ve got 10 games left, so we’ve got to get him ready to play 10 games,” Kitchens said. “He’s going to be physically in better shape going into New England, and he’ll be in a better place mentally, too.”

Mayfield went through stretching, albeit slowly, then watched the rest of practice alongside Kitchens.

After injuring the hip, he nearly crumpled to the ground following a throw Sunday in the 32-28 loss. He later went into the locker room briefly but didn’t miss a snap.

“He was banged up pretty bad, but he stood in there for us,” running back Nick Chubb said. “It means a lot. It shows his team that no matter what he’s going to go out there for his teammates. I respect him a lot. I could tell he was in pain and he pushed through it for us.

“You can say what you want but Baker, when he went down, I was thinking, ‘Man, I don’t know what’s going to happen next.’ He’s a crucial part of this team.”

Mayfield has struggled during the 2-4 start with a league-high 11 interceptions and a 66.0 passer rating that ranks 33rd in the 32-team league. But his teammates remain confident in him and were impressed by his toughness Sunday.

“He does not want to come out of the game, and that is a credit to him as a player, as a person and as a leader,” left guard Joel Bitonio said. “It is just who he is, and you knew that before that. You do not need to see him toughing it out.

“He has had some bad luck on some of the throws this year and stuff, but he keeps going out there and he keeps trying to will us to victory.”

Starting cornerbacks Denzel Ward and Greedy Williams declared themselves healthy after missing four games with hamstring injuries and fully expect to play against the Patriots.

“No doubt in my mind, unless something happens freakishly, but now I’m ready to go,” said Williams, a rookie second-round pick.

He said he took 10-15 repetitions during team drills Tuesday, covered a lot of deep balls and “felt great.”

Ward, Williams and rookie safety Sheldrick Redwine went down during practice Sept. 19, all with hamstring injuries sustained within 10 minutes.

“It’s been very irritating,” Ward said of not playing. “I just want to be out there with my teammates and everything, but I’m looking forward to being back and helping this team.”

Pass game coordinator/secondary coach Joe Whitt said there are “no guarantees” Ward and Williams will return to the starting lineup. Veterans Terrance Mitchell and TJ Carrie played well in their absence until a few hiccups Sunday.

“They might. They might not,” Whitt said. “We are going to put the men out there each week that give us the best chance to win that game.”

Ward and Williams will come back against Tom Brady and the Patriots.

“It’s great competition,” Williams said. “I wouldn’t want to return no other way, just play against Brady and try to make some plays.”

“I only heard he played in Cleveland, great player, a physical guy,” he said. “But that’s just about it. From me watching him, I know he can play ball. If he’s out there, you’ve just got to bring your A-game.”

The defense has struggled to force turnovers — four interceptions, four fumbles recovered — and Williams feels he and Ward can help.

“We’re just playmakers, just making plays on the ball,” he said. “Just getting the ball back to our offense.

The bye week is the time to consider lineup changes, and a possibility is at right guard, where journeyman Eric Kush has struggled. General manager John Dorsey traded for Wyatt Teller before the preseason finale.

“Anytime you have a bye week and you get six games in, you obviously assess a lot of different things and we’re in the process of doing that now,” associate head coach/line coach James Campen said. “We’ll see what transpires through the week.”

Kush has played all but one snap this season, leaving for a play Sunday with an ankle injury. He practiced Tuesday.

“He’s had a couple of games that he’s done really well in one area, in pass blocking, and then struggled in run blocking a little bit,” Campen said. “But he’s such a competitor and he’s going to fight for everything and he certainly is the starting guard for us right now.”

He said Teller is just about fully acclimated to the system.

“He’s getting closer and closer,” Campen said. “He’s getting more comfortable. His knowledge of what we’re teaching here from a schematic standpoint, a fundamental standpoint, he’s starting to catch up.”

A lot is made these days about a quarterback’s release time and how many seconds of protection he gets. Campen isn’t a fan of the information.

“Well, if we’re going by stopwatch, you’re asking the wrong person,” he said. “Because I don’t believe in stopwatches, I think it’s a bunch of hogwash. I think you protect as long as it takes him to throw the damn ball. End of discussion. Period.

“You block until as much time as he needs to throw the ball. I’ve always believed that and I will not stop teaching that.”

Kitchens said the coaches have been looking forward to and planning for the return of suspended running back Kareem Hunt, who’s scheduled to be eligible to play Nov. 10 against the Bills. Kitchens said they’re not allowed to have any contact with him during the suspension.