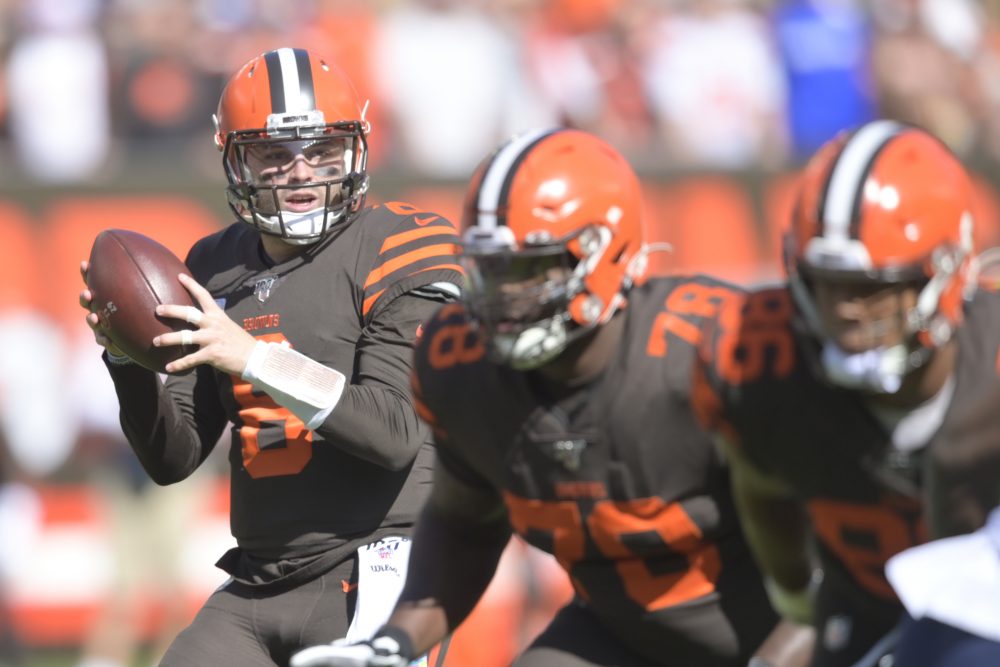 BEREA — Quarterbacks coach Ryan Lindley sees “vast improvement” from Baker Mayfield since the start of the season and predicts a “special” future.

But as the win-loss record and Mayfield’s statistics show, there’s plenty of work to be done to get there.

“We need to hash some things out and make sure we’re in rhythm,” Lindley said Tuesday. “If you want a buzzword, that’s probably it. We’re not all the way there.”

The Browns were counting on a Year 2 leap from Mayfield after he set the NFL rookie record with 27 touchdowns and led the team to five wins in a six-game stretch during the second half. It hasn’t happened.

Myriad factors play a role, and many aren’t in his control. But accuracy is entirely dependent on the thrower, and Mayfield has regressed this season. That’s particularly disappointing when it’s considered one of his greatest strengths.

After completing 63.8 percent last year, he’s dropped to 56.6. Further demonstrating the decline is the lack of quality ball placement. Too many times throws have been behind receivers or too high, leading to interceptions off tipped balls, difficult drops or simple incompletions.

“He’s an accurate guy,” Lindley said. “Sometimes it’s with his feet, he speeds himself up. At times he thinks maybe too quickly, his feet follow up and you’re trying to catch up.

Coach Freddie Kitchens described the work on Mayfield’s mechanics as an ongoing process that includes coaching and self-evaluation. The bye week is a good time to take a longer look, even as Mayfield didn’t throw Tuesday or Wednesday in practice to rest a bruised left hip.

“Everybody keeps saying there’s inaccuracy in his ball,” he said Wednesday. “I still think he throws a good football.”

Dorsey reminds everyone there’s a lot of football left this season, stands behind Kitchens and Mayfield

All of Mayfield’s statistics have gotten worse compared to last year. He’s thrown a league-high 11 interceptions, giving him 25 in 19 starts. The completion percentage ranks 33rd in the NFL, the five touchdown passes tied for 27th and the 66.0 passer rating 33rd, well below last year’s standard of 93.7.

Even more startling is what’s happened in the red zone.

Last year he completed 64.8 percent inside the 20 with 20 touchdowns and no interceptions, and was 60 percent, 10 and zero inside the 10.

The lack of proper ball placement showed up in the game-changing red zone interception Sunday in the 32-28 loss to the Seahawks. He had a window to get the ball to Jarvis Landry on a skinny post in the end zone, but the ball was slightly behind, got tipped and picked. Mayfield never set his feet and looked rushed in the pocket.

The coaches will study what’s happened in the red zone over the bye, but Lindley said Mayfield throwing too hard isn’t a problem.

“The red zone’s a place where you’ve got to spin it in there,” he said. “If you tell a guy to back off, then you’re late on some throws. We just get some bad bounces down there, some stuff that went our way last year. This year we just need to connect and avoid those mistakes where you put it in luck’s hands, so to speak.”

Landry blamed himself for the latest red zone pick and said his advice to Mayfield is simple.

“Just keep throwing it,” he said. “I know myself, Odell (Beckham Jr.), we hold ourselves to a high standard. All of those balls that touch our hands are catchable to us. I know me and Odell for sure take that onus that wherever the ball is or if it’s at me, it’s a good ball and I’ve got to make the play.

“We’ve got big hands, so it doesn’t matter how hard the ball is coming.”

Kitchens and Lindley stressed that the perception of Mayfield’s accuracy is affected by his receivers. Beckham, tight ends Ricky Seals-Jones, Demetrius Harris and Pharaoh Brown and running back Dontrell Hilliard are either new to the team or in expanded roles this year. Mayfield’s final throw Sunday was behind Hilliard and went through his hands for an interception, but he may have expected Hilliard to slow down to avoid the linebacker over the middle.

“You’ve got to get some new guys in the mix, he’s just trying to get on the same page,” Lindley said. “We’ve got some new things we’re trying to do, too. We’ve asked him to do some different stuff than we did last year. We’ve got to find a groove of what feels good with everybody in the equation.”

Defenses have done their part to disrupt Mayfield by adding the element of confusion. Lindley said coordinators studied Mayfield’s rookie film and are playing him differently.

“They’re mixing up coverages. It’s something you see with everybody when guys go from their first to second year,” Lindley said. “Everybody builds a book on different guys scouting report-wise. We’ll continue to see how he can react and adapt to those things and we’ll also change what we do.”

Although several of the interceptions have been on tipped passes, Lindley doesn’t fudge the numbers in Mayfield’s favor.

“He’s a prideful person and he takes pride in this team first and foremost,” Lindley said. “He’s going to take that to heart.”

The second-year struggles haven’t soured Lindley on Mayfield’s prospects as a franchise quarterback.

“On a day-to-day basis, you still see the things he does on the field and the way he carries himself,” he said. “The best part is he’s still young and he’s still growing. You see what that kid’s going to become and what he is and that’s something special.”