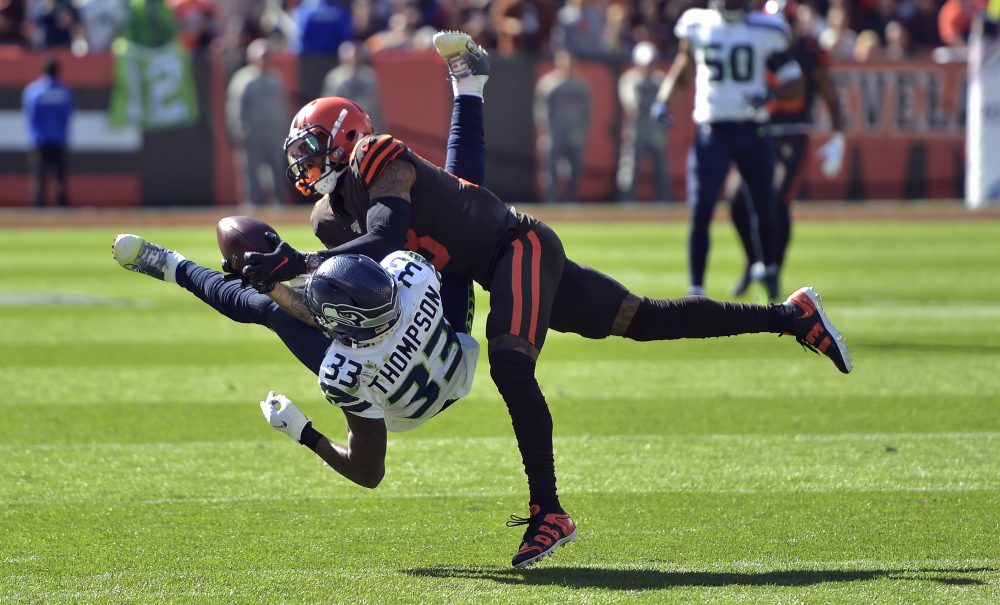 BROOK PARK — Odell Beckham Jr. sees no need to cover his knees while playing, and no reason to be fined if he doesn’t.

The outspoken critic of the NFL’s uniform policy and the fines attached to it was at it again this week. After posting Monday night on Instagram the fine letter he received for not having his knees covered Oct. 13 in the 32-28 loss to the Seahawks, the Browns receiver further explained his contempt Tuesday.

“Fined $15,000 for some pants, and a knee pad that’s this big is not going to protect me from getting hit from Dont’a Hightower straight into my knee,” Beckham said at a bowling event to promote school attendance. “There’s no way around it. Everyone around the league’s pants are there. My kneecap’s way higher than probably a lot of the other people. It’s stupid.

“I got hit from all kinds of different players and different teams. It’s just wack. I don’t know how else to describe it to you, but it’s wack.”

Beckham said the $14,037 fine was his first for this violation this season but he’d been punished when he played with the Giants. The amount is the same he and Ravens cornerback Marlon Humphrey were fined after their knockdown, drag-out fight in Week 4.

Earlier in the year Beckham said he felt picked on by the league for telling him not to wear a watch during games, and for making him change visors during the Monday night win over the Jets.

“It’s just different for me,” Beckham said. “Whatever the case may be, they feel the need to fine me for some pants that cost probably 6 cents to make, and we’re getting fined $15,000. They’re just finding a way to pull the money back from the players. There’s no other way around it. That’s just what they’re doing.”

He believes he’s not alone with his wardrobe decision.

“Nobody wears their knee pads over their kneecaps unless they play quarterback and don’t have to really run,” Beckham said.

#Browns WR Odell Beckham Jr. posts on Instagram a fine letter from NFL. He was hit with $14K bill for pants not covering knees. pic.twitter.com/DRgqCG0XSy

He said he appeals every fine.

Even when the league reduces the fine, Beckham isn’t satisfied.

“Yeah, but still, taking it from $14,000 to $3,000, I’m still losing $3,000 for something that should not, these pads are not, if you want us to be protected, then we need to be in full metal gear and not be able to run and move,” he said. “What’s more important, being able to run and move or the protection, because that pad is not going to do a single thing. I’ve been hit in the thigh pads that are given to us and had a thigh contusion and later tore it during the season. It’s not going to do nothing.

“This is a gladiator sport. They’re there for the rules and that’s it. Other than that, they’re not there for protection.”

Beckham spent an hour with students from the Canton City School District at AMF Brookgate Lanes. He bowled a few frames, gave them pointers, posed for selfies and talked.

“Coming here, I never exactly had the opportunity in New York to do those things and I’ve seen that they’re so big over here in making sure the community’s straight and I loved it and I wanted to be a part of it,” he said of being the face of the event. “Bowling is one of my favorite things to do. Always had a love of kids, so I just thought it was a perfect pairing of that combo and it turned out to be very nice.”

One of the priorities of the Browns Foundation is the Get 2 School, Stay in the Game! attendance campaign. 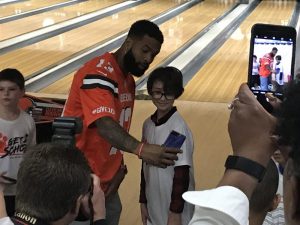 Browns receiver Odell Beckham Jr. takes a selfie with a student from Canton on Tuesday during a bowling event.
SCOTT PETRAK / CHRONICLE

“It’s important for kids to understand the importance of education and knowing I would never be where I was at without the school,” Beckham said. “My dad always said, ‘No A, no play,’ and my mom, I remember coming home and would be terrified to give her that report card if I didn’t have the grades that I wanted. So they always stressed to me that the school work was important.”

Beckham only took up bowling within the last year but has returned to the lanes often. He said his high game is around 250 and he’s aiming for a 300.

He’s had a longer connection with kids and looked at ease hanging with them.

“There’s a part of me that always had that innocence and that pure heart and, unfortunately, it was taken away just by life, but I can always relate to them,” Beckham said. “I’m a big kid at heart. I can sit here and be in here for hours just talking to them. It’s always cool for me to be around them. They’re my inspiration, my motivation and they drive me to keep going.”

Linebacker Jamie Collins has rediscovered his Pro Bowl form in his return to the Patriots.

Collins was cut by the Browns in the offseason after a disappointing 2½ seasons, then signed a one-year, $2 million deal with New England, where he played from 2013 until being traded to the Browns at midseason 2016. He has started every game in the Patriots’ 7-0 start with three interceptions, a touchdown, two forced fumbles, a fumble recovery, 4.5 sacks, four passes defensed and 31 tackles, including six for loss.

The Patriots host the Browns on Sunday.

“Jamie’s done a great job for us,” coach Bill Belichick said on a conference call. “He’s a versatile player as we all know, he can do a lot of different things and he’s made tackles, he’s rushed the passer, he’s turned the ball over, intercepted passes, been around the ball a lot. Excellent communicator, he does a great job of coordinating and organizing.

“He’s a very explosive, powerful guy that’s very athletic and smart and instinctive. He has a really good understanding of our system.”

Former head of football operations Sashi Brown signed Collins to a four-year, $50 million contract with $26.5 million guaranteed after the 2016 season, but he never lived up to the deal. He had seven sacks and three takeaways with the Browns.

The Patriots reportedly agreed to send a second-round pick to the Falcons for receiver Mohamed Sanu, who started six of seven games with Atlanta, catching 33 passes for 313 yards and a touchdown.

The Patriots have dealt with a variety of injuries at the position, including to former Browns wideout Josh Gordon, who missed the Monday night win over the Jets with a knee injury. Belichick was asked if Gordon will practice this week.

“I do not know the answer to that question,” he said. “We will have an injury report on Wednesday like we do every week, and that injury report will be based on what his practice participation availability is.”

Ankou is 6-foot-3, 325 pounds and in his third season out of UCLA. He’s appeared in 11 games with the Jaguars, totaling 19 tackles and 1.5 sacks. He was originally signed by the Texans as an undrafted rookie in 2017.

Notes: Freddie Kitchens sad to see Myles Garrett get punched, “glad the guy ran”
Notes: Baker Mayfield doubles down on criticism of officiating after being fined, says “people need to be held accountable for their job”