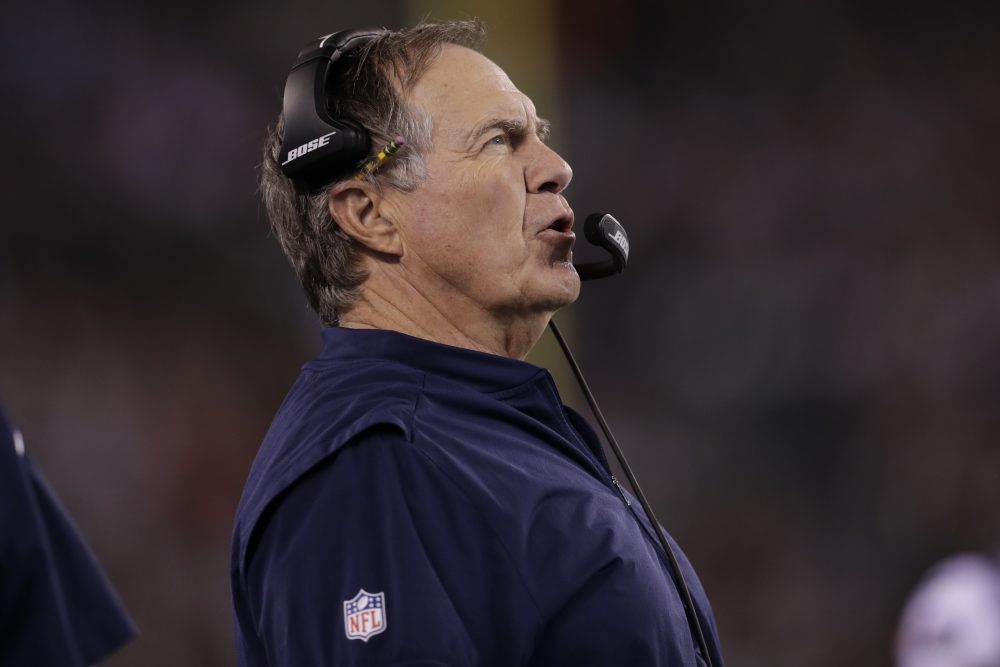 The Patriots are 7-0, coming off a 33-0 win over the Jets on Monday night and playing defense at a historic level.

Yet coach Bill Belichick woke up Tuesday morning worrying about the Browns, who are 2-4 and losers of two straight.

“The Browns have a lot of explosive players in all three phases of the game, make a lot of big plays,” Belichick said on a conference call with Northeast Ohio media just hours after the shutout of the Jets. “They’re very disruptive on defense and pretty much everybody on offense can hit the home run from anywhere on the field.

“They’re really a tough team to prepare for on a short week and we’ve got a lot of work to do. So it’ll be a big challenge for us. (GM John) Dorsey has really accumulated a high level of talent all the way across the board.”

Belichick isn’t one for long sound bites, except when it’s building up the upcoming opponent. He heaped praise across the Browns roster, even mentioning kick returner Dontrell Hilliard.

He was most effusive discussing defensive end Myles Garrett, who’s tied for the league lead with nine sacks. Belichick was asked what he’s thinking when watching Garrett.

“I’m thinking about I wish we didn’t have to play against him,” Belichick said. “He’s pretty much impossible to block. They put him in a lot of different places so you don’t always know where he’s going to be. But wherever he is you better find him and block him or he’ll ruin the game.

“Got great power and explosion, good get-off, very athletic and he’s blocked but then he doesn’t stay blocked, he comes free quickly and escapes. Plays with a lot of power, he’s certainly not a finesse player.”

Podcast: Looking at what it will take for Browns to upset Patriots

The Patriots have outscored opponents by 175 points, the second-largest differential through seven games in NFL history, according to Elias Sports Bureau. Only the 1920 Buffalo All-Americans at plus-218 were better.

The Patriots have allowed 48 points in seven games (6.9 average) and 223.1 yards per game, both best in the league. They’ve given up only three touchdowns on defense, two rushing and one receiving.

Takeaways have been the catalyst, as the Patriots have 18 interceptions, four fumble recoveries and three defensive touchdowns to go with 26 sacks.

“Well, it’s really about team defense,” Belichick said of the staggering interception total. Carolina ranks second in the league with nine. “There have been times when the quarterback’s been under pressure or the ball has been tipped or something’s happened that has created those opportunities. And we have a very instinctive group of players that make good decisions in coverage and making plays on the ball. We’ve made some good catches that sometimes defensive backs don’t always make.”

The matchup will be a difficult one for Browns quarterback Baker Mayfield, who’s thrown an NFL-high 11 interceptions and ranks near the bottom with a 66.0 rating and 56.6 completion percentage.

“Baker’s a really smart player,” Belichick said. “Has a lot of talent, can make all the throws, terrific arm, tough, he’s taken some hits and hangs in there. And can make extended plays with his legs to either buy more time to throw or scramble for key first downs in the red area, on third down, things like that. So he’s a big threat and a tough guy to handle.

“He’s obviously smart, Coach (Freddie) Kitchens gives him a lot of latitude at the line of scrimmage to change plays and make adjustments. Clearly he’s making good decisions and getting the team into good plays or out of bad ones.”

“He’s a game-breaker from any place on the field,” he said. “Very hard to tackle. You saw the play against the Jets where he took an RPO slant or seam route and goes 90 yards for a touchdown. Running by you, making acrobatic catches or catching a short pass and breaking tackles and getting through the defense that way.

“He’s a dynamic player and we played against him before. He’s a tough guy to handle. I have a ton of respect for him as a football player.”

When told about the kind words, Beckham returned the compliment.

“I’ve always love-hated the Patriots because they were always winning,” he said at a bowling event with students from the Canton City School District to promote school attendance. “This is a team I’ve watched closely for years, the way that they do it. And I remember me saying a quote about wanting to be like the Patriots. It’s like, who doesn’t want to win and who doesn’t want to have a full team perform in every way — special teams, offense, defense — and just the full complete game.

“I’ll see him after the game and I’ll give him love or if I see him before the game.”

Belichick has won six Super Bowls with quarterback Tom Brady, and Beckham has a special present for the second half of the duo.

“It’s always nothing but love and respect for Brady, as well,” he said. “Actually I have a pair of cleats for him made out of — I hope no animals were really harmed — but made out of goat hair, so I’ll give them to him before or after the game.”

Goat hair cleats are an unusual choice, but Beckham had a reason.

“It’s for me, too, but I’m gonna give them to him because he’s one of the GOATS (greatest of all time) and he’s more the GOAT than I am.”

Despite the perfect record and dominant defense, Belichick said the Patriots face an uphill climb on a short week against a Browns team coming off a bye.

“We have five days now to do our best to prepare for a very good Browns team that has had extra time to prepare, they’ve already practiced for us,” said Belichick, noting the Patriots hadn’t put together their game plan yet. “They’re way ahead of us, we have a lot of work to do. They’re extremely well-coached, have a lot of great players. So it’s a big challenge for us.”