Notes: Baker Mayfield doubles down on criticism of officiating after being fined, says “people need to be held accountable for their job” 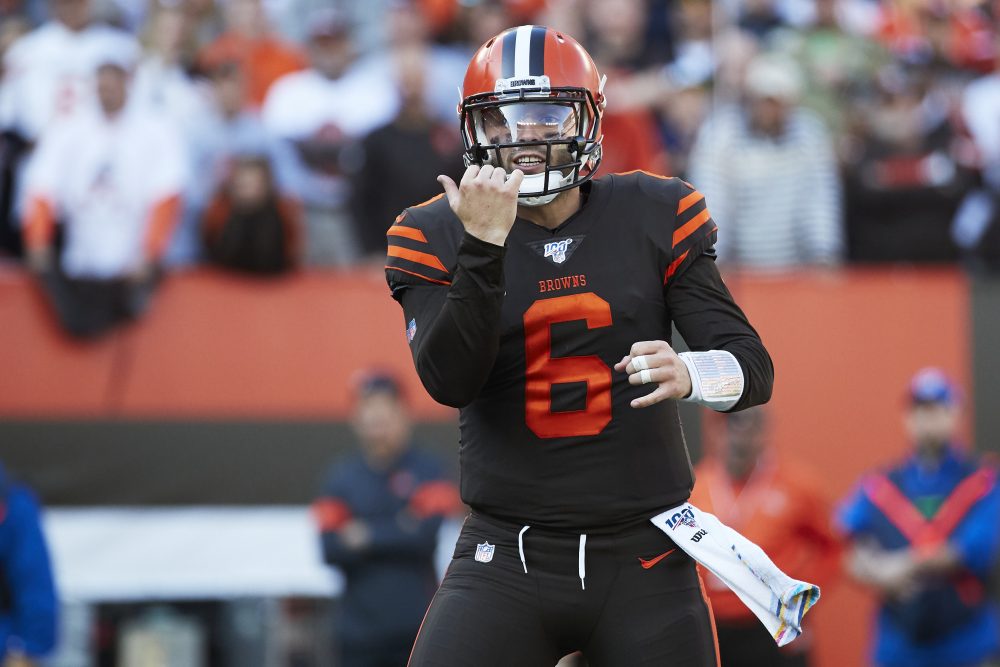 BEREA — A $12,500 bill from the NFL for criticizing the officiating didn’t silence Baker Mayfield.

“I knew I was going to get fined, but it needs to be said,” he said Wednesday. “People have to be held accountable for their job. When it affects my job, it sucks because it’s not in my control.”

Mayfield was fined last week for comments about the officiating in the Browns’ 32-28 loss to the Seahawks on Oct. 13. He said he’ll appeal.

“I wouldn’t say it’s complaining when it was blatantly obvious,” Mayfield said. “I’d say that’s just stating facts. Freedom of speech, I thought that’s OK, but I get fined for it.”

The Seahawks game featured several questionable calls, but Mayfield specifically mentioned the illegal blindside block called on receiver Jarvis Landry in his postgame news conference. Landry wasn’t fined for the play, which replays showed was not a blindside block. Landry was facing the correct direction and didn’t initiate contact.

“That’s the league. That’s what they do. They fine you for some ridiculous things,” Mayfield said. “That’s just how it is. There’s a reason everybody’s talking about it. It’s not just me. It goes for every team. With how our team is, we’re not going to get a lot of calls, and we know that, especially going into this week. There’s no time to worry about it, no time to stress about it. Just play our game.”

Receiver Odell Beckham Jr. ripped the league’s uniform policy and the fines levied because of it Tuesday after getting fined $14,037 for his pants not covering his knees against the Seahawks.

Coach Freddie Kitchens was asked about two of his highest-profile players publicly criticizing the league.

“I like money so I am not going to complain about the officials,” he said. “If they want to give their money to the league, they can do it.

“I would like for them to keep their money, but I also like our guys to be passionate about what they are doing. They have a decision to make, I guess.”

What about the loud complaining putting a target on the Browns?

“As long as those guys are not hurting the team, it does not matter,” Kitchens said. “My concern is the team, and I do not want them hurting their team with comments and neither one of them has.”

Josh Gordon won’t come back to haunt the Browns this week. The Patriots receiver and former Browns headache was placed on injured reserve Wednesday with a knee injury.

Gordon had 20 catches for 287 yards and a touchdown in six games. The Patriots traded a second-round pick to the Falcons on Tuesday for receiver Mohamed Sanu.

The Browns traded Gordon to the Patriots after two games last season, ending a long and troubled tenure.

He was selected in the second round of the supplemental draft in 2012 and played 41 games with the Browns, catching 180 passes for 3,106 yards and 16 touchdowns. The highlights, which included an All-Pro season in 2013 when he led the league with a franchise-record 1,646 receiving yards in just 14 games, were overshadowed by a series of drug suspensions.

NFL Network reported Gordon thinks he’s close to returning to play and could negotiate an injury settlement with the Patriots to become a free agent and sign with another team.

Defensive end Myles Garrett isn’t dwelling on the incident last week when a man approached his car in traffic and punched him in the face through the window.

Garrett was asked if he’d like to see Richard Perez, the 24-year-old Strongsville man identified by police, prosecuted.

“Right now, I don’t know what’s going to happen to him and I’m not worried about it,” Garrett said. “I’m worried about the Patriots and stopping (Tom) Brady.”

Garrett said he won’t change his approach of interacting with fans.

“Hesitant to open my window,” he said. “That’s about it.”

JOBS ON THE LINE

Kitchens remained quiet on potential changes to the starting offensive line, particularly replacing left tackle Greg Robinson. Kitchens said a decision hadn’t been made and he didn’t plan to reveal the lineup until Sunday.

The Browns made a midseason move at left tackle last season, putting in Robinson for Desmond Harrison, and it worked as Mayfield was sacked only five times over the final eight games.

“If you look at last year with what we did with the offensive line, it kind of gave us a new energy to push forward,” Mayfield said. “Whoever is in there, we need to trust and be able to play. That is what we have been kind of stressing.”

Justin McCray seems the likeliest option to replace Robinson, but Kendall Lamm could also step in. Kitchens wasn’t concerned that a switch could come against the top-ranked Patriots defense that’s second in the league with 26 sacks.

“When we make changes, it is more about us than it is about them,” he said. “I would say that part of it does not matter.”

Free safety Damarious Randall (hamstring) didn’t practice and wasn’t on the field during the early portion of practice open to reporters.

“It is kind of just a day-to-day thing,” Kitchens said.

** Beckham (groin) was a full participant. He had been listed with a hip injury prior to the bye.