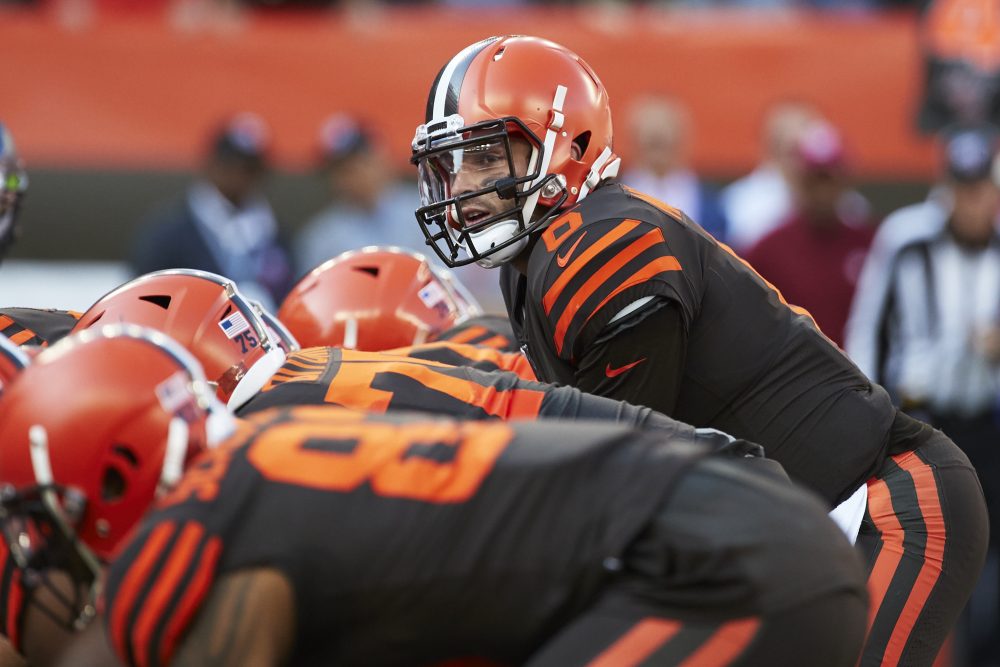 BEREA — The Patriots have won an NFL-record 20 straight games against first- and second-year quarterbacks, dating to 2013.

They have 18 interceptions in a 7-0 start this season, returning two for touchdowns, and have allowed only three offensive touchdowns.

They had Jets quarterback Sam Darnold seeing ghosts — and talking about it while wearing a microphone on national TV — on his way to five turnovers Monday night.

Baker Mayfield was the No. 1 pick in 2018 — two ahead of Darnold — and will look to snap Patriots coach Bill Belichick’s mastery of inexperienced passers on Sunday in New England. To Mayfield, it’s no mystery why his predecessors failed.


“They move guys around up front,” Mayfield said of the Patriots. “They try to get you to give the perfect look or perfect protection and they mix stuff up. They pressure you. They hit you up.

“We will see how they play us, but we have to be ready for pressure and react.”

Of all the gaudy defensive statistics for the Patriots — and there are a ton — Mayfield is most impressed by what has followed the league-high 22 takeaways.

“They obviously get a lot of points off their turnovers, but a lot of the turnovers are on the offense’s negative side of the field so it sets up their offense for automatic points,” he said. “They take advantage of that. They do a good job of playing complementary football.”

Mayfield used the bye week to rest a bruised left hip — “I feel good. I am ready to go,” he said — and reset after a disappointing first six games that saw the Browns go 2-4 and Mayfield fall well short of expectations. He has a league-high 11 interceptions and ranks near the bottom of the league with a 66.0 rating and 56.6 completion percentage.

With shutdown cornerback Stephon Gilmore (three interceptions), playmaking safety Devin McCourty (five INTs) and a versatile group of linebackers that can rush the passer from anywhere, the Patriots are a difficult matchup for a young quarterback to fix his problems.

They’ve allowed opposing quarterbacks to complete 50.8 percent for 1,209 yards (5.0 an attempt) with one touchdown, 18 interceptions and a league-best 35.6 passer rating.

“Everything is about putting pressure on the quarterback and making him make decisions when he isn’t ready to make them, and they do an excellent job, the best in the league in doing that,” coach Freddie Kitchens said. “They make you win one-on-one matchups (at receiver) and then they get the ball out of the quarterback’s hands as quick as possible from their pressures.”

Kitchens joked that he was so bad as a quarterback at the University of Alabama he usually woke up seeing ghosts. He didn’t want to talk about Darnold specifically.

The Patriots defense ranks first in scoring (6.9 points per game), yardage (223.1) and third-down conversions (14.3 percent) and second with 26 sacks. It was the first in the Super Bowl era not to allow a touchdown in the first three games of the season and is on pace to allow the fewest points in a season in NFL history.

“To me, they are more than staggering,” Kitchens said of the stats. “This is a record-breaking pace that they are on and a pace that I do not know will ever be matched. Listen, they are tremendous in all areas.”

Receiver Odell Beckham Jr. didn’t care that the Patriots have yet to face a high-powered opponent.

“Nobody’s scoring, so it doesn’t matter if they haven’t faced the best offense in the league,” he said. “They’ve played at a very high level. I know our game plan is to come in and be the very best team that we are going to be. Play assignment, alignment, technique, everything has got to be on point.”

The Patriots blitzed Darnold time and again, as the secondary stared into the backfield waiting for him to make a mistake. The Browns hope to counter with attention to detail.

If the Patriots make Mayfield unload the ball in a hurry, the receivers must be in the right spots and turn the quick completions into big gains.

“Baker’s going to have a challenge ahead of him and we have to do our part to help him out,” Beckham said. “When there’s plays there to be made, make them. That’s where the perfection comes in is to hit those plays that we need to hit. I don’t think there’s ever any lack of confidence from any side, Baker, myself, anybody. It’s just about being better, doing better.”

Belichick is famous for tailoring the game plan to the opponent each week. So Mayfield wasn’t sure if he’ll be blitzed like Darnold was.

“They try to point out your weakness, expose that and take away your strength,” he said. “So we will see how they are playing us and be able to react. It is just part of being an offense. We need to be able to adjust.”

The Browns can try to ease the burden on Mayfield by handing the ball to running back Nick Chubb, who ranks fourth in the league with 607 yards. New England’s run defense ranks second with 74.7 yards a game but is 15th at 4.2 yards a carry.

Kitchens knows nothing will be easy.

“They make sure you dot all your i’s and cross all your t’s from a standpoint of protections,” he said. “They are going to attack your protections in detail. They very much play with passion. They get to the football. They do not miss any assignments. They make you beat them, which that is what you want to do as a defense. They make you run several plays and you have to do it with precision or they are going to be there to make a play. They do not miss tackles.

“They do a good job across the board.”

Odell Beckham Jr. dreamed of playing with Patriots, admires and respects Tom Brady and Bill Belichick
Defensive line needs to hurry up and dominate to give Browns best chance against Tom Brady, Patriots