Defensive line needs to hurry up and dominate to give Browns best chance against Tom Brady, Patriots 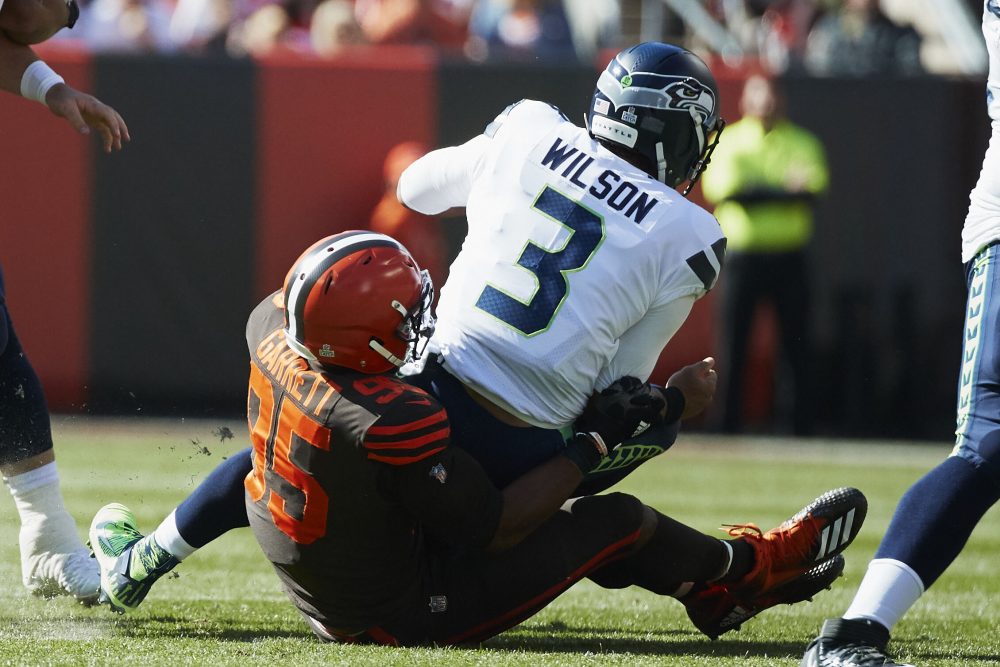 BEREA — For months, coach Freddie Kitchens has called the defensive line the strength of the Browns.

This would be a good week for the underachieving front four to turn into a force and take over a game.

“We have the talent up front to be able to do that,” coordinator Steve Wilks said Thursday. “This is a perfect game for those guys to step up and try to be that dominant force up front.”

Wilks said he’s seen “spurts” of dominance from the line through the 2-4 start, but a sustained effort is necessary against Tom Brady and the undefeated New England Patriots, who will host the Browns on Sunday. The Patriots are first in the league in scoring (31.9 points a game), 10th in yardage (377.3) and fifth in passing (279.7).

“I see the potential of these guys that are lined up next to me,” end Myles Garrett said. “We just haven’t played at our best.

“We want to always be the best part of the team. I guess you could say that’s selfish of us. But if we put it on our backs and we take control of the game, nobody has to go above and beyond. We can do that. We just have to go out there and prove it.”

The most effective way to slow down Brady is to pressure him with a four-man rush and drop seven in coverage. The Giants (2007 and ’11 seasons) and Eagles (2017) used that formula in Brady’s three Super Bowl defeats in nine appearances.

Wilks noted the Giants had a special and deep group of defensive linemen, led by Michael Strahan, Justin Tuck and Osi Umenyiora. Browns general manager John Dorsey borrowed the blueprint in the offseason.

He inherited Garrett, the No. 1 pick in 2017 who shares the league lead with nine sacks, and up-and-coming tackle Larry Ogunjobi, who’s second on the team with three sacks. Dorsey then traded for end Olivier Vernon — giving up Pro Bowl-caliber right guard Kevin Zeitler — and signed tackle Sheldon Richardson to a three-year, $37 million contract as a free agent.

The individual performances have been mostly solid but unspectacular. Richardson is third on the team with 27 tackles but doesn’t have a sack, and Vernon has only one sack but played his best game against the Seahawks before the bye.

“Not best enough, we didn’t get the win,” he said. “All I care about is winning, so I ain’t doing enough.”

Commentary: When it comes to coach and QB, Patriots have edge over Browns — and everybody else

The Browns are tied for ninth in the NFL with 19 sacks and haven’t come close to matching the standout performance the 49ers front had in the 31-3 win over the Browns on Oct. 7 when end Nick Bosa and his linemates wrecked the game.

“When we’re 2-4, everybody can do more. That’s just how it goes,” Ogunjobi said. “When you’re losing, everything’s magnified. So we’ve got to continue to find ways to get to the passer, to stop the run, but it’s not just us, it’s everybody.

Garrett was added to the injury report Thursday with a knee injury and was limited in practice but is expected to play against the Patriots. Coach Bill Belichick raved about him Tuesday, saying he’s “pretty much impossible to block.”

“That’s a major compliment from one of the best to ever do it,” Garrett said. “I definitely appreciate it, but at the end of the day compliments aren’t going to stop me from getting to Brady.”

The Patriots are down a couple of starters on the offensive line — center David Andrews and left tackle Isaiah Wynn — but have shown the ability through the years to overcome with Belichick, Brady and veteran line coach Dante Scarnecchia.

“They have an offensive line that does their job and a quarterback who knows the game very well and knows to get the ball out of his hand and gets it to his playmakers,” Garrett said.

Not only has the defensive line failed to dominate with regularity, it has been a disappointment defending the run. The Browns rank 30th (154.0 yards a game) after allowing 445 yards in the latest losses to the 49ers and Seahawks.

“They’re going to want to run the ball,” Garrett said. “We’ve been susceptible to that, so we have to show that we can stop it, make (Brady) beat us, not in the pocket. We’ve got to make him scramble, feel uncomfortable, throw off his back leg and just do the other things that are going to keep him from getting the ball out to his guys 20, 30 yards downfield. I think we should have a good day.”

Brady, 42, is widely considered the greatest quarterback to ever play, with the rings, stats and longevity to support the argument. Linebacker Joe Schobert reminded everyone he’s human and is affected by pressure in his face, although he’s only been sacked 11 times this year.

“If we are able to lock down in coverage a little bit, make him pump and go to a second or third read and let guys like Myles get some pressure up the middle, get to him and get him off his spot, any quarterback in the NFL, it’s hard for them to deal with that,” Schobert said. “If we can cover down, take away the threats and make him double clutch, I think our D-line against anybody in the NFL is going to be getting there and causing havoc.”

Garrett grew up thinking he’d play in the NBA. When the vision changed to the NFL, sacking Brady became a goal.

“As I got older and realized he had no plans of retiring until about 50, I thought about getting to him,” Garrett said. “If he’s not the best ever to do it, he’s top two. You want to be able to say you got to a guy like that, you beat a guy like that.”

The Browns likely won’t be able to do that without a big day from Garrett and the rest of the front four.