Commentary: When it comes to coach and quarterback, New England has the edge over Browns — and everyone else 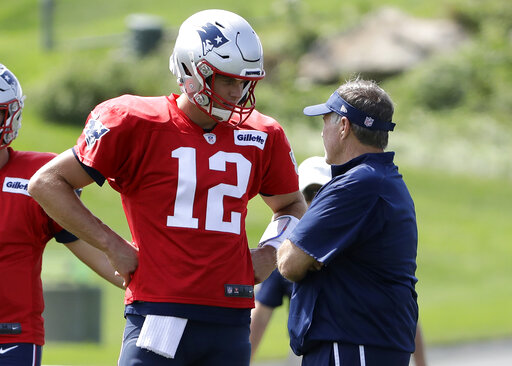 Two are at the beginning of their careers, with hardly any track records at all.

Two are near the end of their careers (maybe), with not only first-ballot Hall of Fame resumes, but as arguably the best ever at what they do.

It’s an interesting confluence of four careers that couldn’t be more disparate.

The Browns’ 44-year-old rookie head coach, a folksy, easy-going, easy-to-like southerner, with a knack for turning phrases, a welcome sense of humor and a refreshing perspective on life in general, and his profession specifically, given that he only has two career wins as an NFL head coach.

The Patriots’ 67-year-old veteran coach, now in his 24th year as an NFL head coach, all of it spent coaching the two teams that will meet Sunday in Foxborough; a cold and distant, humorless, personality-devoid football automaton, with all the warmth of a rattlesnake and the flatline personality and monotone speaking voice designed to keep the world at arm’s length from his world, as a certifiable coaching genius.

The Browns’ cocky, colorful 24-year-old quarterback, in his first full season on the job, who at times courts controversy and plays shamelessly to the crowd, while, this year, having to deal with failure for one of the few times in his career, which is still in its infancy, after he was the first overall pick in the 2018 draft.

The Patriots’ ruthlessly efficient, no-nonsense technician, a quarterback selected in the sixth round, 199th overall, of the 2000 draft — when Mayfield was 5 years old — who has methodically climbed to the top of the quarterback and championship mountains, by winning Super Bowls with almost ho-hum regularity, rewriting the sport’s record book, while his celebrity, presence and will-to-win towers over all others in his sport, with the possible exception of his head coach.

All of the above will be on display Sunday afternoon in Foxborough, where the wobbly 2-4 Browns, who desperately need to start winning games, will meet the 7-0 Patriots, who may not lose any games.

Two years ago, the Patriots were 13-3 and went to the Super Bowl.

Two years ago, the Browns were 0-16 and their coach jumped in the lake.

After punting on Hue Jackson, the Browns rebooted with Kitchens and Mayfield.

The Patriots haven’t rebooted in this century. They’ve rolled with Belichick and Brady for each of the last 19 years, finishing first in their division 16 times and winning the Super Bowl six times.

Never mind winning it, the Browns have never even BEEN to the Super Bowl.

How does a team get to the Super Bowl? On Sunday, Kitchens and Mayfield can stare across the field and see how.

There are other ways to reach the Super Bowl, but having the greatest head coach and the greatest quarterback ever, both Hall of Fame-bound, both, incredibly, still at their absolute peak, is probably the best way to do it.

The Belichick-Brady coupling is an astonishing, unlikely confluence in itself. On Jan. 27, 2000, the Patriots hired Belichick, whose only previous NFL head coaching experience was with the Browns, from 1991-95. Belichick had losing seasons in four of his five years in Cleveland, going 36-44 (.450).

Four months after Belichick was hired, the Patriots drafted Brady, in the sixth round of the worst quarterback draft ever. In the first 64 picks of that draft only one quarterback was taken: Chad Pennington, 18th overall. The second quarterback taken, with the 65th overall pick, was Giovanni Carmazzi, who never played a single down in a National Football League game.

With the 183rd pick in that draft, the Browns paused, checked their notes … and then confidently took quarterback Spergon Wynn.

Sixteen picks after that the Patriots took Brady.

Eighteen years later nobody was taken ahead of Baker Mayfield in the 2018 draft. While Brady is the greatest 199th pick ever, Mayfield is not playing like the first overall pick in his draft.

He did last year. But, after a scintillating 14-game run as a rookie that got everyone excited, Mayfield this year has had a Spergon Wynn-ish start to the season.

Kitchens, meanwhile, has had a Mayfield-type start to his season as well.

It’s hard for a coach to be great without a great quarterback, and vice versa.

The Patriots have that.

We’re still not sure what the Browns have.