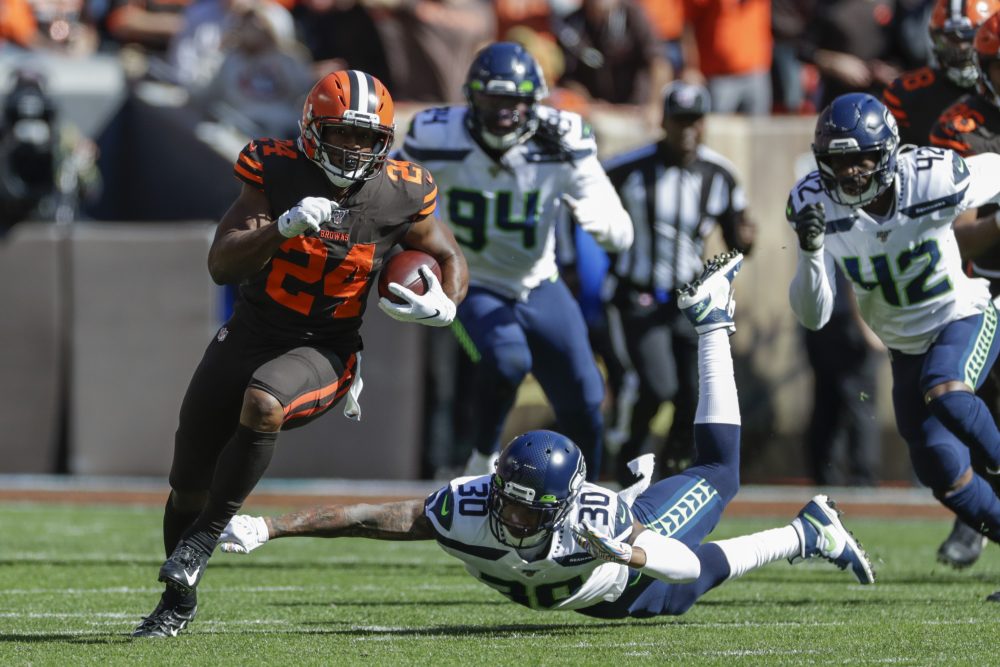 Patriots coach Bill Belichick is a master at making opponents play “left-handed,” as Browns offensive coordinator Todd Monken describes it. Belichick’s defensive game plan is as simple as it is complex: Take away what the offense does best.

“And if other guys can’t make plays, then it’s going to be a long day,” receiver Jarvis Landry said.

The Browns have multiple weapons, so Belichick had to choose whether to focus on slowing down running back Nick Chubb, who’s been the team’s best player this year, or limiting the production of receivers Odell Beckham Jr. and Landry.

“We have a lot of guys that’s capable of making plays if they decide to take me or Odell away,” Landry said.

Belichick will likely test that theory. And not only does he take away a team’s best options, he makes life difficult for the secondary threats. For the Browns, that’s receivers Antonio Callaway and Rashard Higgins and tight ends Demetrius Harris, Pharaoh Brown and Ricky Seals-Jones.

“They are more of a man-match team,” Monken said. “It presents a little bit more of a challenge in terms of our guys are going to have to win their one-on-one matchups. They are as good as anybody in staying in phase with your receivers and making you make contested plays. If you do, then you will have success. You will get some matchups in your favor. You just have to take advantage of them and make the plays down the field.”

The Patriots, who have a league-high 18 interceptions, rely on a deep and talented secondary. Stephon Gilmore leads the way at cornerback and has three picks, and safety Devin McCourty has an NFL-best five. But the Browns want to stay aggressive.

HIT ME WITH YOUR BEST SLOT

When Tom Brady needs a completion in a critical situation, especially on third down, he looks for receiver Julian Edelman, his good buddy and a former Kent State quarterback. Edelman rewards the trust with completion after completion and first down after first down. Edelman, 33, has continued to pile up the numbers this season, ranking tied for sixth in the NFL with 45 catches and 14th with 496 yards, both best on the Patriots. He’s added two touchdowns.

“They’ve got a great brotherhood,” Browns nickelback TJ Carrie said of Brady and Edelman. “The biggest challenge is a lot of things with them two just come second nature. That’s the biggest feat that you have to try to disrupt when you play them because the chemistry of them playing for so many years and winning for so many years, if you can try to break some of that connection here and there, that’s when you can take your chances and win.”

Edelman is arguably the league’s best slot receiver, using quickness and shiftiness to get open, reliable hands to secure the ball and toughness to pick up yards after catch and first downs. He’s been at his best in the postseason, ranking second all time with 115 catches and 1,412 yards, behind only Hall of Famer Jerry Rice.

“He is just so dynamic,” defensive coordinator Steve Wilks said. “Extremely smart. Quick. Physical. I like the mere fact that he is not just a receiver that catches the ball, he does a lot of the dirty work when you start looking at how he blocks. Hard-nosed, tough player that can definitely make things happen. He can change the game at any moment.”

Cover your eyes, Browns fans. The Patriots are 41-0 at home against AFC teams with Brady and Edelman in the lineup together.

General manager John Dorsey’s decision to cut linebacker Jamie Collins in March made sense. He had only seven sacks and two interceptions in 2½ years, looked disinterested at times and didn’t come close to living up to his four-year, $50 million extension.

The decision to give up on Collins looks regrettable after he signed a one-year, $2 million deal to return to the Patriots, the team that drafted him in the second round in 2013 and traded him to Cleveland in 2016. Whether it’s the magic of Belichick, the system fit or the comfort of familiar surroundings, Collins is making the most of his immense talent and has regained his Pro Bowl form. He has started every game in the Patriots’ 7-0 start with three interceptions, a touchdown, two forced fumbles, a fumble recovery, 4.5 sacks, four passes defensed and 31 tackles, including six for loss.

“That’s where he wanted to be,” defensive end Myles Garrett said. “He wanted to be back home. So I’m proud of him. He’s doing well. He’s happy, and that’s all you can ask for. But I hope we beat the hell out of him.”

Collins’ athleticism, strength and nose for the ball were evident in his time with the Browns but didn’t produce nearly enough big plays. That’s been the biggest change since he rejoined the Patriots, who are using him in a variety of ways.

“That is probably the biggest thing — his versatility,” Monken said. “They play him in kind of a hybrid role where he can cover and he can blitz. He can be a matchup problem if you get him on one of your skill players, which they do, and they like to rush him at different spots if they feel like they can take advantage of that matchup.”

“Jamie Collins is playing great,” quarterback Baker Mayfield said. “Obviously he has a vital role there. He has been there before and just went right back in and they plugged him back in. Obviously I have a lot of respect for Jamie being around him for a year.”

BATTLE OF THE BULLDOGS

If the Browns are going to upset the Patriots, Chubb will likely have a huge role. He must outplay close friend, former roommate and University of Georgia backfield companion Sony Michel.

The Patriots drafted Michel with the 31st pick in 2018, and the Browns took Chubb four picks later. Both have gotten off to strong starts in their careers, but Chubb gets the edge. He’s fourth in the NFL this season with 607 rushing yards and seventh with a 5.3 average per carry. Michel has 390 yards and a 3.3 average but has matched Chubb with six rushing touchdowns. He set a rookie record with six rushing touchdowns in the playoffs last year, and the Patriots are 12-0 when he scores.

“He’s a quick, one-cut, downhill runner,” linebacker Joe Schobert said. “He’s explosive, he can take the ball all the way if you get out of your gaps and give him space.”

Chubb said they remain close and he watches as many of Michel’s games as he can but he wasn’t sure if they would get together Saturday night.

“I like to get my sleep before games,” he said. “I don’t really go out much.”

The Browns need a rested Chubb if they plan to play to their strengths and take pressure off Mayfield against the Patriots’ No. 1-ranked defense. New England ranks first or second in most key categories but only 15th with 4.2 yards allowed a carry.

“When we can get Nick going and take some pressure off the rushes, it makes everybody’s job easier,” center JC Tretter said.

Regardless of the personnel, Cleveland’s offensive line would’ve been under the microscope. The Patriots defense is relentless and excels at putting stress on the quarterback and those trying to protect him. They use their versatile linebackers to bring pressure from all angles and aren’t afraid to bring the house to force everyone on offense into hurried decisions.

“They’re really well-coached and they have a lot of different guys that make it look like you’re getting different looks but it’s a lot of the same stuff just with different bodies,” Tretter said. “So it can be confusing and it can cause chaos if you’re not dialed in on what exactly you’re getting.”

The Browns line will receive even more attention because of the change at left tackle. Greg Robinson told reporters Friday he had been benched after an inconsistent first six games and questions about his preparation. Justin McCray is expected to take over and make his first start at the position. The bye presented the opportunity to make the switch, but the Patriots matchup makes it difficult timing.

“They make sure you dot all your i’s and cross all your t’s from a standpoint of protections,” coach Freddie Kitchens said. “They are going to attack your protections in detail.”

“A lot of tape and a lot of communication in making sure that everybody’s looking at the picture the same way,” Tretter said.

Straight appearances in the AFC championship game for the Patriots

Consecutive seasons with a record of .500 or better for the Patriots

Wins since 2010 for the Patriots, the best decade in NFL history

Point differential for the Patriots (223-48), the best in the NFL since 1920 after seven games

Commentary: When it comes to coach and quarterback, New England has the edge over Browns — and everyone else
Prediction: Patriots 24, Browns 20