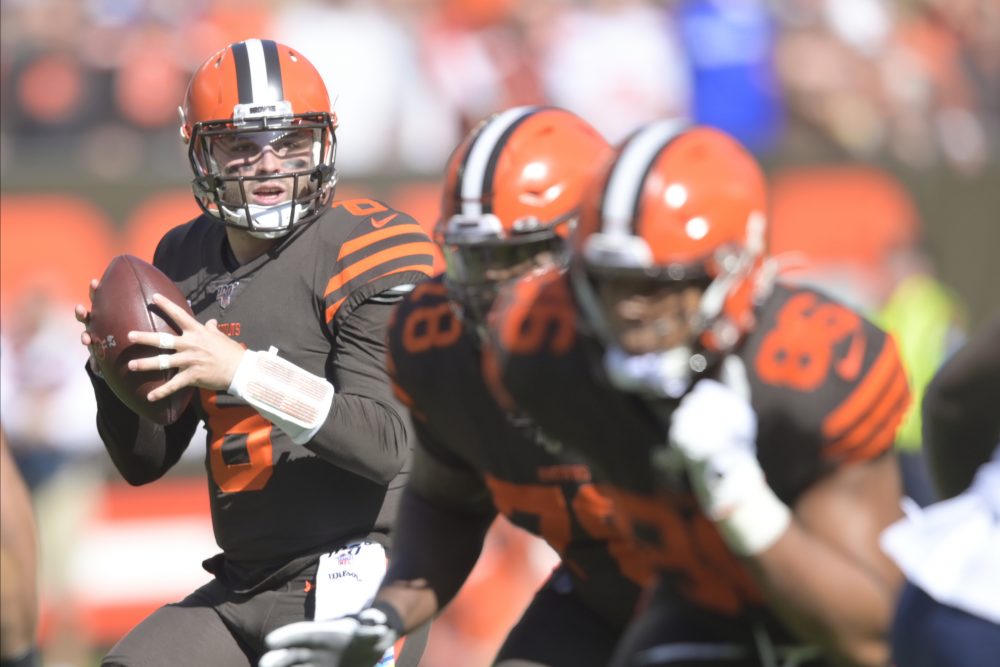 The bye was full of self-examination for the Browns.

The players called for a dedication to discipline and accountability. Coach Freddie Kitchens urged them to complete the transformation from “group” to “team.” Everyone reached the realization that the winning better start soon.

The Patriots (7-0) will provide the ultimate examination Sunday afternoon in rainy Foxborough, Mass. The Browns are 11-point underdogs to the defending Super Bowl champions, and a third straight loss would drop them to 2-5 and dangerously close to a must-win situation for the remainder of the season.

A win would shock the league and could sling shot the Browns toward the playoffs, where many expected them to end up before the season started.

“Coming off the bye week and the momentum it could have for us going forward for the rest of the season and this long stretch we have, it could be huge for us,” quarterback Baker Mayfield said.

The Browns haven’t lost confidence in themselves. Stopping short of a guarantee, receivers Odell Beckham Jr. and Jarvis Landry talked boldly about going to New England to bring back a victory.

“We’ve definitely got the talent to go in there and compete at a high level and come away with a W,” safety Jermaine Whitehead said.

“I can’t imagine anybody having more talent than these guys,” Patriots coach Bill Belichick said of the Browns during the week.

As Kitchens stressed over the bye, talent isn’t enough. The Browns have been talented all season, which has only led to greater disappointment.

The Patriots could add to the misery.

They also have motivation. Belichick has 299 career victories, including the postseason, and can join Don Shula and George Halas as the only coaches to reach 300. 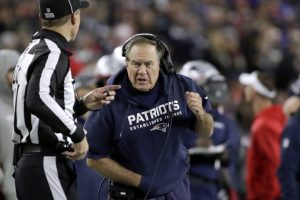 Patriots coach Bill Belichick talks to an official during a game this season.
AP

“His ability to adapt, his ability to do a tremendous job game-planning and anytime you do something for that long and are that successful, it says something about your integrity of going to work every day, finishing the day and staying in the moment. I think he exemplifies that,” said Kitchens, who counters with two career wins. “I have the utmost respect for him, everything he has done and everything he represents. Everybody wants to kind of be like him. I do not know a better football coach in the NFL past, present or future.”

His 244 wins are the most for any player in history, as are his six Super Bowl rings. He’s started at least 12 games in 17 seasons and been to the Super Bowl in nine of them.

“He’s definitely set a big legacy and changed the game of football and how you have to approach playing that team,” cornerback TJ Carrie said.

Belichick and Brady are 244-70 as a tandem for a winning percentage of .777. Their brilliance has transformed the organization into the model for professional franchises. The Patriots are 137-24 (.851) at home since 2002, and are dominating anywhere they play this season.

“We have a lot of food on our plate this week,” defensive tackle Sheldon Richardson said. “Just have to make sure we do our jobs and come in with the right mindset.”

“That is what you strive to do is be what they are on every level,” Kitchens said. “I do not see many weaknesses anywhere there, probably in the whole state of Massachusetts.”

While Brady’s been good this year, the defense has been otherworldly.

With Belichick taking on coordinator duties and calling the shots, it’s allowed 48 points and is on pace to give up 110. The low for a 16-game season is 165 by the Ravens in 2000.

The Patriots have 18 interceptions, 50 passes defensed and have held quarterbacks to a 50.8 completion percentage, one touchdown and a 35.6 passer rating. For comparison’s sake, the Browns have allowed 67.7 percent completions and 12 touchdowns with four interceptions for a 102.6 rating.

The news gets worse for first- and second-year quarterbacks facing Belichick. The Patriots are 37-3 at home against the youngsters and have won 20 straight overall.

“You have to be able to make good decisions, you have to trust the people around you and you go play the game,” Kitchens said of Mayfield, who’s thrown an NFL-high 11 interceptions.

The Browns’ best players aren’t about to back down.

“I don’t care about their record or their record for the last three years. It doesn’t matter what they’ve done,” defensive end Myles Garrett said. “When you go in there, they’re just another team. You go into their stadium and you want to shut the crowd up.

“It doesn’t matter to me what any of their players have done. I have respect for them because they’ve put in years in the league and they’ve accomplished much, but once you step on the field, you just have to be better than them on that night. That’s the goal.”

He knows what a win would do for the Browns.

“It’s definitely a momentum builder,” he said. “They’re ranked one or two in the league and they move the ball as well as anybody. Their defense is playing with their hair on fire. So if we’re able to move the ball on them and stop them from moving the ball, it proves that we are for real and that we can put this thing together.”

“We definitely know we’ve got to start winning games and making statements and going out and playing Browns football, where people can look at the film and know it’s going to be a tough match when they play us,” Whitehead said.

Young Browns defenders appreciate Tom Brady’s greatness, experience, intelligence but looking to make their mark against him
Odell Beckham Jr. says he’s always got Baker Mayfield’s back, will “jump in the fire with him”