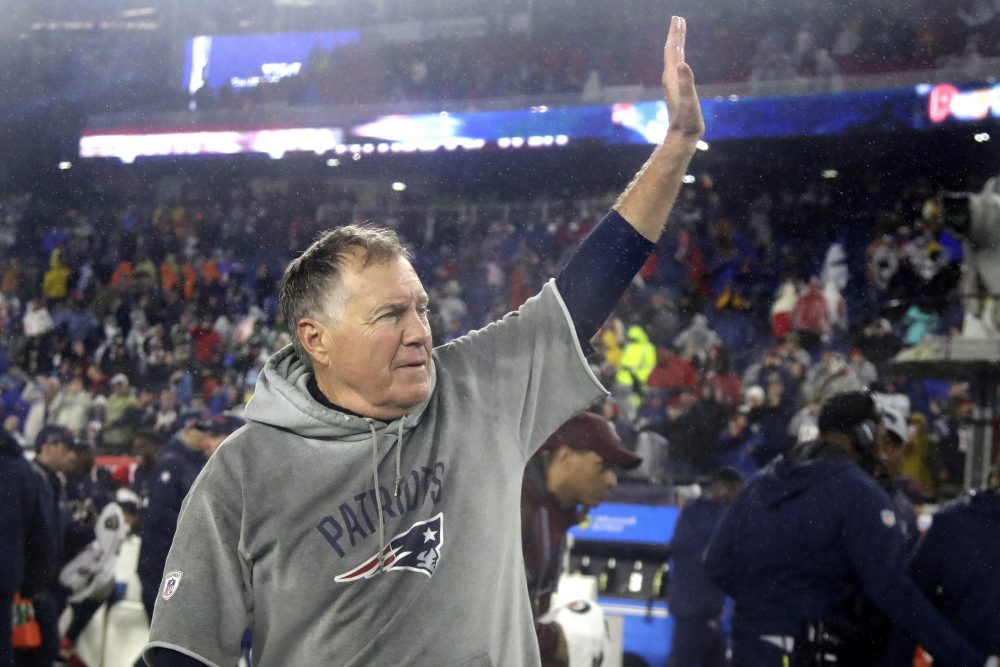 FOXBOROUGH, Mass. — Bill Belichick was 39 years old when he coached the Cleveland Browns to a win over the New England Patriots in 1991 — his first season as an NFL coach.

As Belichick trotted toward the center of the field Sunday, his trademark cutoff hooded sweatshirt soaked in rain following the Patriots’ 27-13 win over the Browns, he did so as a member of a small but elite group of coaches.

“Fortunately I didn’t play in any of those games,” Belichick said. “I was a part of those, but honestly, players win games in this league and I’ve been fortunate to coach a lot of great ones.”

The Patriots improved to 8-0 for the third time in team history and the first time since 2015, when they started 10-0. The Browns have lost three straight games.

Brady completed 20 of 36 passes, hitting Julian Edelman on eight of them for 78 yards and both TDs.

New England capitalized on three first-quarter turnovers by Cleveland to take a 17-0 lead. Running back Nick Chubb had back-to-back fumbles and quarterback Baker Mayfield had an interception.

The Patriots have forced a league-high 25 turnovers this season.

“It’s an awareness to hunt the football,” he said. “As a defense we all know that.”

The Browns did trim New England’s lead to 17-10 early in the third quarter. But the Patriots struck right back on their next possession, using a 59-yard completion from Brady to James White to help set up a 14-yard touchdown pass from Brady to Edelman.

Chubb ran for 131 yards, and Mayfield finished 20-of-31 for 194 yards and a touchdown. The Patriots have won 21 straight games against first- or second-year quarterbacks, the longest such streak in NFL history.

After the Patriots took a 3-0 lead, Chubb took a handoff from Mayfield but had the ball inadvertently kicked out of his hands by left guard Joel Bitonio . It was scooped up by Dont’a Hightower and returned 26 yards for a touchdown.

On the first play of the ensuing series after the Patriots’ kickoff landed out of bounds, Chubb got the ball again, this time getting around the edge and running 44 yards down the field.

He appeared headed for a touchdown, but New England cornerback Jonathan Jones gave pursuit and hammered the ball from Chubb’s hands on the Patriots 4. It was recovered by McCourty.

Following a Patriots punt, the Browns’ next series ended when Lawrence Guy broke into the backfield and stepped in front of Mayfield’s shovel pass attempt to Jarvis Landry on the Cleveland 16 for his first career interception.

New England needed just two plays after the changeover for Brady to connect with Edelman for an 8-yard touchdown.

“They’re going to take advantage of stuff like that. That’s jut the kind of team they are,” Mayfield said. “This isn’t Nick Chubb’s fault. He’s going to be very hard on himself.”

Cleveland finally found some traction in the second quarter on its sixth possession, capping a six-play, 54-yard drive with a 21-yard pass from Mayfield to Demetrius Harris.

The Browns made a handful of changes on both sides of the ball in hopes of ending a two-game losing streak to the Patriots.

On offense Justin McCray made his first career start at left tackle in place of Greg Robinson, and Wyatt Teller rotated with starter Eric Kush at right guard.

Starting cornerbacks Denzel Ward and Greedy Williams returned to the lineup after missing the past four games with hamstring injuries.

The Patriots tested both early on.

On New England’s second drive of the game Phillip Dorsett beat Williams along the sideline and caught a 33-yard pass from Brady to get the Patriots into Browns territory.

But after the Patriots extended the drive by converting on a fourth-and-7 on the Browns 33, Ward nearly intercepted Brady’s third-and-2 pass into the end zone intended for Dorsett. New England settled for a field goal.

Brady said they are already looking to add to Belichick’s win total.

Mayfield’s TD pass to Harris in the second quarter ended a 71-0 scoring streak by the Patriots. They scored the final 21 points in their win over the Giants on Oct. 10 and then shut out the Jets 33-0 last week.

Cleveland’s three turnovers on three consecutive offensive plays marked the first time any team has done so since the Dolphins did it in Week 1 of the 2012 season against the Texans. It is only the seventh time it has been done since 2000.

The Browns visit Denver. The Patriots are at Baltimore.