Mailbag: Does Nick Chubb need 25 carries for upset of Patriots? What’s up with Genard Avery? And what about Rashard Higgins? 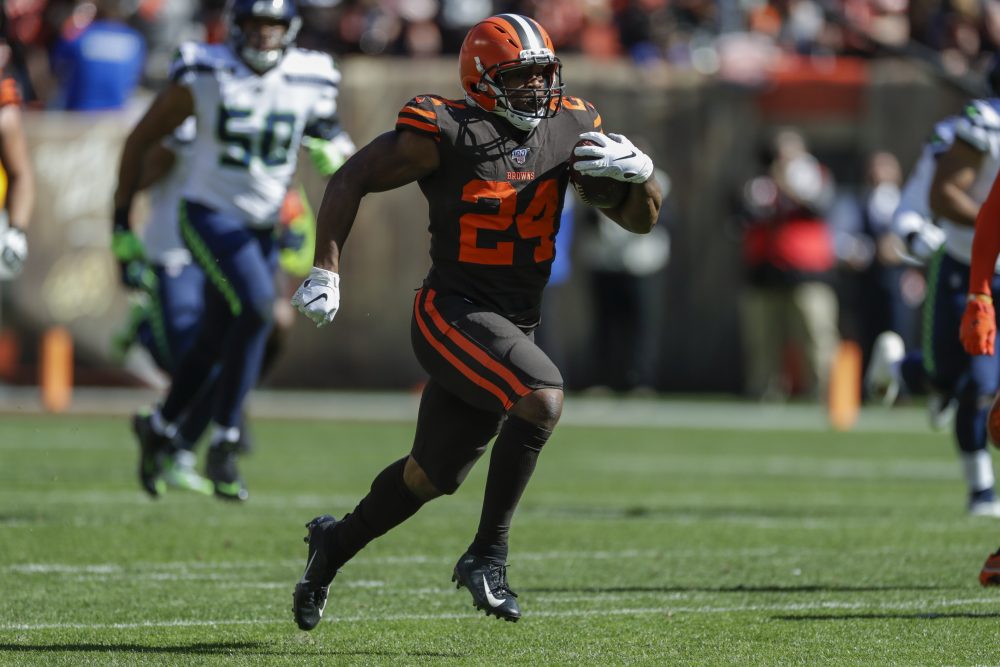 Q: Scott, for the Browns to win Nick Chubb has to have 25+ carries. True or False?

A: We need more true and false questions. And my answer is True.

Chubb’s been the team’s best player and I don’t think the Browns can win with Baker Mayfield throwing 35-40 times against the Patriots’ top-ranked secondary. So coach Freddie Kitchens must stay devoted to Chubb even if he doesn’t have success early.

The problem with this philosophy is that Bill Belichick likely feels the same way and will concentrate on stopping Chubb and forcing Mayfield to beat him. The Browns can restore the balance necessary for success by getting a couple of big completions to Odell Beckham Jr. or Jarvis Landry early to make the Patriots play honest.

Q: If defensive end Genard Avery is capable of making game-changing impacts, why isn’t he active?

A: You’re referring to coordinator Steve Wilks’ answer Thursday when asked why Avery has been a healthy scratch in five games. Wilks lamented only being able to keep 46 players active on gamedays, then added that he’s sure Avery would have a big impact if he played.

I respect Wilks not ripping Avery to the media, but the reality is the coaches aren’t happy with him. If they were, he’d be active and playing following a promising rookie season last year. They’ve decided Chad Thomas and Chris Smith are more valuable and Avery isn’t needed.

UPDATE: Avery is active for the game against the Patriots, with Smith a healthy scratch. It sounds like Wilks saw an improved Avery in practice and knew he was going to play. Now we have to see if he makes the predicted impact.

Q: What is the NFL’s rationalization for having 53-man rosters but only suiting up 46 players per game. I’m asking not only re: Genard Avery, but also for situations like Thursday night where Washington’s Case Keenum got hurt, Dwayne Haskins played poorly and Colt McCoy had to watch because he was inactive.

A: The rule was put in place to level the playing field when one team was beset with injuries. The league determined it wasn’t fair for one team to have 53 healthy players against a team decimated by injuries. The rule continues to work in that way but has its drawbacks.

First of all, many coaches will tell you 46 players aren’t enough to take to a game. The limit forces difficult decisions and leaves rosters vulnerable. The Washington quarterback situation you mentioned is an example, as almost all teams choose to go with two quarterbacks to save a roster spot. The offensive line is the other area that’s often jeopardized, and the Browns showed that in Week 1 when they were down to their final five after Greg Robinson got ejected and Kendall Lamm injured a knee.

This rule could be tweaked in the next collective bargaining agreement.

Q: Was there any truth to the report by John Clayton recently that coach Freddie Kitchens was almost fired after the Seahawks game? Or was this bogus?

A: I don’t believe the report. I’ve heard no such rumblings around Berea, and general manager John Dorsey was incredibly supportive of Kitchens during the bye following the loss to Seattle.

A: First, he was hurt. The sprained knee suffered blocking in the opener was more serious than he initially let on. Then when Higgins thought he was healthy again, Freddie Kitchens decided to give him more time to fully recover.

The other issue is the coaches apparently prefer Antonio Callaway as the third receiver behind Odell Beckham Jr. and Jarvis Landry. Callaway is way more explosive than Higgins but hasn’t shown nearly the dependability.

Kitchens said Higgins will play against New England for the first time since Week 1, and it will be fascinating to see how the Browns split reps between Callaway and Higgins. I’m betting Callaway gets 60 percent, but with the precision necessary to beat the Patriots, a lot of Higgins on third down makes sense.

A final thing to watch: The trade deadline is Tuesday, and if a team wants Higgins, I think Dorsey would give him up.

Q: Tut-Hut & it looks like rain … any chance coordinator Steve Wilks can play a cover 3-2-1 backend zone? And we can double Julian Edelman with Denzel Ward & an extra defender? Say MoneyMitch? Greedy Williams bangs with Mohamed Sanu all day.

A: Love the enthusiasm and like your idea. But something defensive backs coach DeWayne Walker said during training camp stuck with me. He said Ward, Williams and Terrance Mitchell don’t have experience playing in the slot and can only play outside. Not only does that increase the importance of TJ Carrie and Eric Murray as nickelbacks, it limits the options vs. elite slot receivers like Edelman.

I believe Ward has the skill set to play inside but needs more work. So when Edelman lines up in the slot, I expect the Browns to double-team him but not with Ward. It would be Carrie or Murray and a linebacker or safety.

Q: Should the Browns sign Josh Gordon when he’s released by the Patriots in two weeks?

Yes, it appears that Gordon will be released from New England’s injured reserve in time to play again this season. No, I wouldn’t bring back Gordon.

In case you weren’t kidding, here’s the reason. Gordon was so much trouble during his time here, including at the start of last year, GM John Dorsey gave him away for almost nothing. And the Browns have plenty of talent at receiver. That’s not the problem.

Q: Why would the Browns bench the third-best guy on the O-line while ignoring the two worst guys?

A: ProFootballFocus has graded benched left tackle Greg Robinson as third on the line behind left guard Joel Bitonio and center JC Tretter and ahead of right tackle Chris Hubbard and Eric Kush. Going strictly by their ratings, the move to replace Robinson, likely with Justin McCray, doesn’t make much sense.

But I got the sense the issues with Robinson are more about preparation and trust than what happens during games. He’s also had critical errors, including getting ejected in Week 1 and drawing a holding penalty on the final drive against Seattle. There’s a reason Robinson has bounced around despite being the No. 2 pick in the 2014 draft.

I would agree that sticking with Kush is a surprise, especially with Dorsey trading for Wyatt Teller before the season. Maybe the coaches didn’t want to make two moves at the same time.

A: I believe they were filmed in Los Angeles, where Mayfield and wife Emily reside in the offseason.

Mailbag: Would you still make the trades with the Giants? Why is Eric Kush still playing? Why aren’t they using 2-minute offense?
Mailbag: Should fans be nervous about today’s game? What’s been Freddie Kitchens’ biggest problem? Does NFL have it out for the Browns?