Analysis: With mistakes going uncorrected and discipline still lacking, there’s no reason to believe this team will go on a run 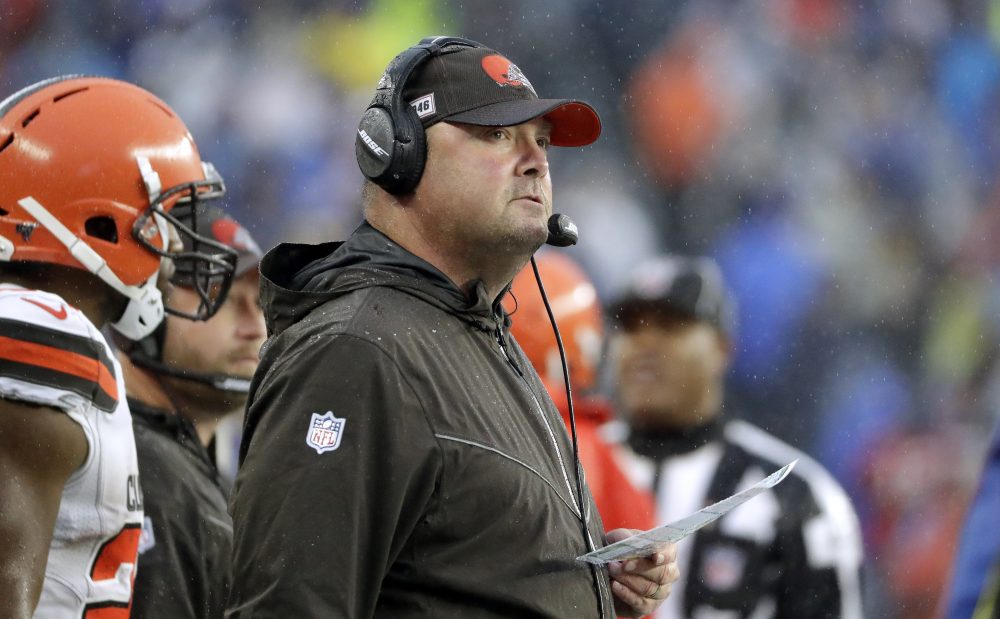 The Browns aren’t the same team that went 1-31 just a couple of years ago.

They have a No. 1 pick at quarterback. They have talent across the roster. They have a proven general manager with a strong football resume and competent lieutenants around him.

That just makes the 2-5 record so much more frustrating for the fans who remain tortured on Sundays.

The Browns came out of the bye week talking about discipline, accountability and going on a run.

They went to New England on Sunday and made all the same mistakes they had through the first six games, handing the Patriots a 27-13 win.

The game was lost with three turnovers on three straight offensive plays in the first quarter, as the Patriots turned them into 14 points.

If the outcome weren’t guaranteed, the 13 penalties sealed the deal. Six false starts led the way, as the Browns increased their NFL-high penalty total to 70.

“If we don’t correct these mistakes, we’re going to be the ‘if’ team or coulda, woulda all of those things, so sh– has to get corrected,” receiver Odell Beckham Jr. told reporters after the loss.

The problem with having a roster full of big-name talent is everyone expects victories. Ownership, the front office, the players and the fans.

Coach Freddie Kitchens walked into his first job as a head coach with suffocating expectations and he’s still struggling to catch his breath. I’m not ready to say he’s in over his head, but he certainly leaves me scratching mine way too often.

After Nick Chubb uncharacteristically fumbled on two straight carries, the Browns trailed 10-0 when they got the ball back. The next play call should’ve been a safe one, something to calm the nerves and settle the team. Instead, Kitchens called an interior shovel pass that was intercepted by defensive lineman Lawrence Guy when left guard Joel Bitonio couldn’t reach him in time to block him.

Bitonio said they’ve run the play before but it’s more difficult against the 3-4 scheme of the Patriots. Kitchens should’ve realized that and not taken the chance. Mayfield’s 12th interception of the year — this goes into the pile that aren’t his fault — was turned into a Patriots touchdown and a 17-0 lead that is insurmountable with Bill Belichick and Tom Brady on the other sideline.

The second-guessing of Kitchens continued throughout the game.

He lost both challenges on calls that were never going to be reversed. They came at critical times — a close fourth-down conversion by the Patriots in the second quarter and a third-and-3 offensive pass interference on receiver Antonio Callaway in the fourth quarter that wiped out a first down — which is a factor in when to throw the red flag, but both felt like panic moves, especially the latter.

Kitchens saved the most bizarre sequence for last.

But there was confusion and the punt team took the field. According to Kitchens’ explanation, they intentionally took a false start penalty rather than use a timeout in order to return the offense to the field.

In the end he got the decision right, but not until giving up 5 yards and opening himself to even more criticism.

Perhaps a bigger indictment of Kitchens is the continued, and admitted, lack of discipline and accountability. Yes, players are ultimately responsible for committing penalties. But the coach is the one who must establish a culture and demand discipline.

Something is missing. And it’s not the talent.

But all the high-priced superstars in the world won’t necessarily bring victories. Maybe general manager John Dorsey didn’t get the right superstars. Maybe he didn’t hire the right coach. Maybe they just need more time together.

The reality is the climb from 0-16 in 2017 to 12-4 and the playoffs was going to be more difficult than many realized. That doesn’t mean it was impossible, or that 2-5 is acceptable. It’s not.

Kitchens and company have backed themselves into a corner with the opening clunker against the Titans, the blown lead against the Seahawks and the missed opportunity against the Patriots. The Ravens (5-2) hold a three-game lead in the AFC North and aren’t going to collapse, so the Browns must get to 10 wins to have a chance at the playoffs.

The schedule certainly gets easier from here, but the way the Browns have played through seven games, and especially Sunday, isn’t good enough to string victories. They make too many mistakes to beat even average teams.

They need to go 8-1 over the remainder of the schedule. The run must start with a win Sunday in Denver. More importantly, it will require better fundamentals and better coaching.

Kitchens and his players have provided no reason to believe that will happen.

Prediction: Patriots 24, Browns 20
Commentary: Browns still have time to turn it around, but there’s a lot to turn around