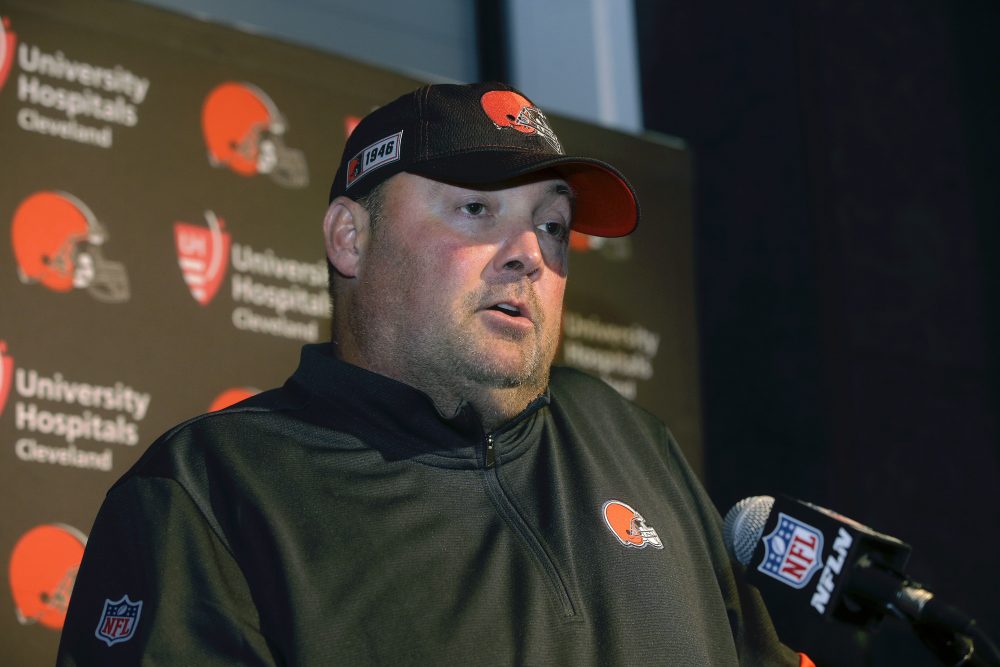 BEREA — Coach Freddie Kitchens was explaining the fourth-down mess in the fourth quarter against the Patriots when he dropped the cliché but key line that applies to more than one embarrassing sequence.

“The buck stops with me,” he said Monday.

Kitchens is being blamed for much more as the turnovers, penalties and losses pile up. While he’s not the one fumbling, throwing interceptions or moving before the snap, he is in charge and the sloppiness makes him look bad.

“Everything about the program should reflect on me and I will accept it,” he said. “But I also have a hand in fixing it.”

Kitchens has been preaching the need for more discipline and accountability for weeks. His words have seemingly fallen on deaf ears, as the Browns had three turnovers and 13 penalties Sunday in the 27-13 loss to the Patriots that dropped them to 2-5.

“It takes commitment from each individual that is committing these penalties,” he said. “I think moving forward these guys are going to be committed to (stopping them).”

The Browns have a league-high 70 penalties through seven games and are the only team with a pair of 13-penalty outings — a whopping 18 in the opening loss to the Titans. Kitchens cited defensive end Myles Garrett as someone who’s been able to fix the problem — he had five penalties in the first two games and only one since — but his teammates haven’t followed his lead.

“It is a commitment that they have to have to each other and accountability to each other because it is very evident that it is costing us football games,” Kitchens said. “When they decide that, it will change. We are going to do the things to speed up that process, which we have been doing.”

Kitchens declined to give many details about the measures he’s taken at practice but referenced his training camp policy of making offensive linemen run after a false start.

“There has to be some kind of consequence,” he said.

Cornerback TJ Carrie has seen a difference from Kitchens as the problems have persisted. He said Kitchens has taken players out of the lineup and cut their repetitions for mistakes in practice.

“Coach Kitchens is definitely starting to hit those things and be a lot (more) critical on the things that we are not as disciplined at,” Carrie said. “Those are things that he’s going to continue to stress and continue to do until we ultimately can fix them.”

Taking away playing time is the strongest hammer for a coach.

“Everything gets evaluated whenever the same problem keeps happening to the same people,” Kitchens said. “We will not hesitate in doing that.”

The season that started with such great expectations is getting dangerously close to irrelevance. The Browns might have to go 8-1 the rest of the way for a legitimate shot at making the postseason.

Quarterback Baker Mayfield said after the game the talented Browns have to “show up … and prove it on Sundays.”

Carrie was at a loss for why the concentration in practice hasn’t carried over to the games.

Kitchens couldn’t escape the criticism for how he handled fourth-and-11 with 6:17 left and a 27-10 deficit. He said the punt team is used to running on the field in that situation and he hadn’t done a good enough job informing everyone the offense would go for it regardless of the situation. So he told the punt unit to take a false start penalty, then sent the offense back out.

“I should not have let that happen, but once the punt team was out there, there were two choices: Use your last timeout or take a penalty,” he said. “I decided to take a penalty.”

The sideline confusion prompted another question of whether the rookie head coach should give up offensive play-calling duties.

“I am calling the plays. I am the head coach,” he said. “That is not happening.”

The coach of a struggling team can feel like he’s putting out fires all day. Receiver Odell Beckham Jr. complained after the game that he wished he had gotten more chances to challenge Patriots cornerback Stephon Gilmore.

“Odell had seven balls thrown to him. He caught five of them,” Kitchens said. “I am not responding to that. We need to win a football game. That is what I am worried about.”

He has a simple solution.

Free safety Damarious Randall said the coaching staff is doing a “helluva job” trying to minimize penalties and put the onus on the players. He also remained steadfast in his belief the Browns can save the season.

“Definitely. Our goal is still there,” he said. “This team knows that. The coaching staff knows that. We all know that. Now we are just to the point where we just set ourselves up that we do not have much room for error, which is cool because you want to play your best football down the stretch and that would be a good way with us leading into January football if we can go ahead and get this train moving in the right direction. Just string together seven, eight or nine straight wins, that would be pretty dope.”