Baker Mayfield storms off from interview, tweets he’s “frustrated” by the losing 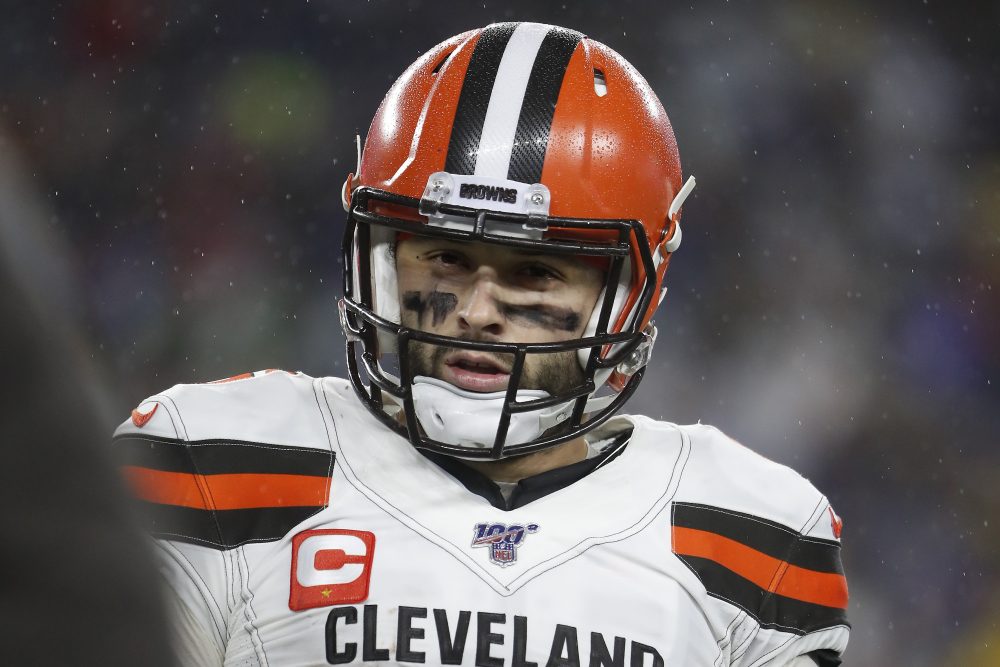 BEREA — Baker Mayfield bailed out to his right again Wednesday.

Mayfield cut short his weekly media availability and stormed off, to his strong side, when he didn’t like a line of questioning about a failed two-minute drive in the first half Sunday during the 27-13 loss to the Patriots.

“Was I happy with the drive? No, we didn’t score points,” he said. “That’s the dumbest question you could ask. What?”

Then he bolted, well before the interview normally would’ve ended. He talked for about eight minutes.

The losing has gotten to Mayfield. And he admitted it.

Mayfield took to Twitter to explain himself shortly after the blowup. The Browns are 2-5, have lost three straight and are in danger of dropping out of the playoff chase with two or three more losses.

“Everybody wants to hear the truth until they actually get it…. I am who I am and always have been,” Mayfield tweeted. “Don’t call it emotional when it’s convenient and then passion when it fits. I care about winning, so yeah I’m frustrated.

“If I was to act like it’s okay to lose, then y’all would say that I’ve gotten complacent. My sense of urgency is at an all time high. And if I offend anybody along the way… that’s too bad”

Mayfield, the No. 1 pick in the 2018 draft, has struggled in his second season. Early in the year he repeatedly left the pocket too soon to his throwing side and he’s tied for the league high with 12 interceptions, is 32nd with a 57.6 completion percentage and 31st with a 67.8 passer rating.

He’s had a strained relationship with the media, especially Tony Grossi of TheLandonDemand.com. Mayfield was fine in the interview Wednesday until Grossi asked about a perceived lack of urgency at the end of the half.

“There was a penalty, so we were in negative yardage,” Mayfield first replied.

The follow-up question was about taking a lot of time between plays earlier in the possession as the Browns trailed 17-7. The Browns were deliberate until converting a third-and-3 with a pass to Odell Beckham Jr. with 1:10 left.

The ball was snapped again 18 seconds later, and Mayfield threw a 12-yard pass to receiver Jarvis Landry. They hurried to the line, but Mayfield was sacked with 28 seconds left and coach Freddie Kitchens used his last timeout.

A false start penalty on left tackle Justin McCray put the Browns in second-and-25 from their 24-yard line, so they threw two short passes and went into the locker room.

“Ah, well, when the penalty happened, then we’re behind the chains,” Mayfield said, before Grossi interjected a follow-up about the clock being stopped. “No, no, stop saying ‘but,’ I just told you the clock was running and we had a penalty. You want to give them the ball back? No. You don’t play, you don’t know. That’s just plain and simple.”

Then came the final exchange in which Grossi asked if Mayfield was happy with the failed drive.

As Mayfield took off, he said, “Jesus, Tony.”

The Browns have reached a critical point in the season and nerves have become frayed. Some in the media and fan base are wondering about Kitchens’ job security seven games into his first year, and he was buttoned-up with reporters Wednesday morning, hours before Mayfield talked.

“I think he is continuing to get better,” Kitchens said. “Baker works his tail off during the course of the week and he is prepared on Sundays. Just have to continue to try and get better.”

Mayfield and the Browns went on a second-half run last season. The Browns were 5-3, including a run of five wins in six weeks, and Mayfield threw 19 touchdowns against eight interceptions and five sacks.

He feels he’s nearing that level of play.

“Close, but we are not winning so it does not matter,” he said. “Until we start winning, I have to continue to get better and better each week.”

Mayfield, 24, was elected a captain by teammates and feels responsible for helping accountability grow on a team that has been penalized a league-high 70 times.

“I can continue to be more vocal and harp on the little details within every day of practice,” he said.

Kitchens has seen Mayfield take on a larger leadership role.

“I think Baker has, and I think we have several guys that have,” he said. “Everybody in our locker room has to understand that we are all accountable to the things that have been happening. This is a new day. We are trying to get better in that area, and I am confident that we will.”

Despite the losing streak and resulting stress, the Browns remain confident they can go on a run and win the AFC North. That would likely require going 8-1 down the stretch — the Ravens are 5-2 and have a three-game lead — but the schedule has turned following a brutal start capped by the trip to play unbeaten New England.

The Browns played the NFL’s second-toughest schedule to date, according to ESPN Stats & Info, with their opponents combining for a 36-17 record. The rest of the schedule is the second-easiest, with the opponents having gone 21-45-1.

“It is the NFL. The margin of error is already very slim, so for us to get to where we need to be, little details and doing our job is very important,” Mayfield said. “We are 2-5. We have to win one game at a time.”

Analysis: With mistakes going uncorrected, there’s no reason to believe this team will go on a run

“I understand his passion and his desire to win,” he said. “He really wants to be the best and I feel like in that situation he feels like he’s being attacked. He probably feels like he answered the question to his fullest ability and he feels like it’s being piled on.

“Is it the right thing to do to storm off? Probably not, but that’s his personality. He’s fiery, he wants to be the best, and I think that just shows that he’s trying to get us to a certain level.”

Bitonio didn’t intend to say anything to his quarterback.

“It’s one of those situations where I just kind of keep my hands out of it and let Baker be Baker,” he said. “That’s just who he is.”