Notes: Punishment running returns to practice after plethora of penalties 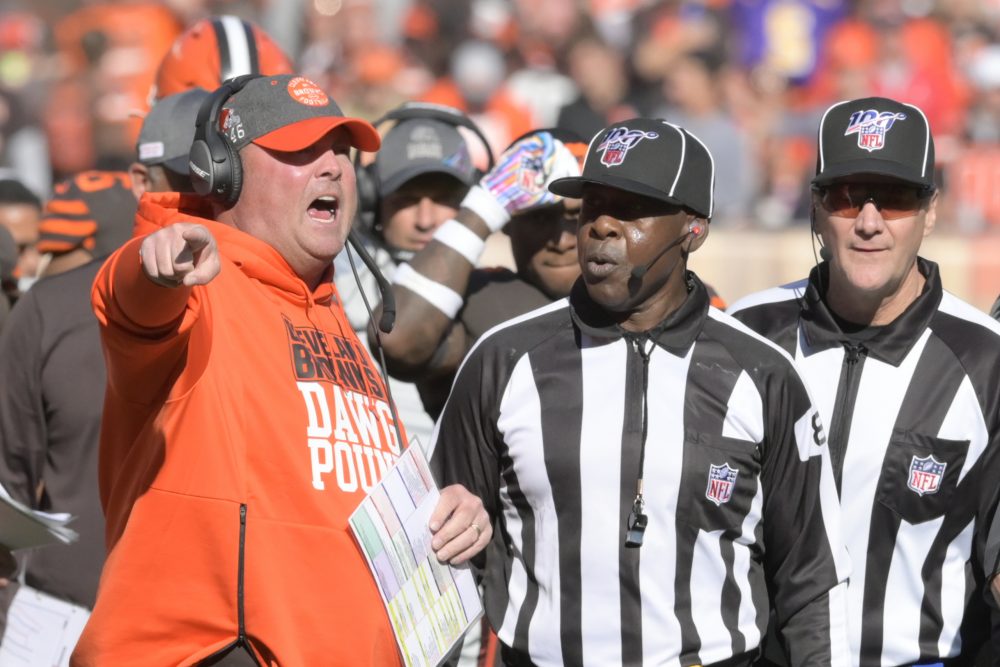 Running back Nick Chubb called it going “back to the basics.” Left guard Joel Bitonio described it as a return to high school.

With the Browns having been penalized a league-high 70 times through seven games, Kitchens reverted to his training camp policy of having players run as punishment if they jump offsides or false start.

“I know it sounds simple, but we have to fix them somehow,” Bitonio said. “Things like that where it’s like a high school thing but, hey, if it’s going to get us thinking about it, if guys don’t want to jump off, then maybe we’ll improve a little bit in the game.”

The Browns are on pace for 160 penalties, which would fall three short of the NFL season record of 163 set by the 2011 Raiders, who were led by former Browns coach Hue Jackson. The 1998 Chiefs are second with 158.

Cleveland’s high is 128 in 1989 under first-year coach Bud Carson. The Browns won the AFC Central.

Kitchens said Monday “there has to be some kind of consequence” for practice penalties, and Chubb said he’s seen an increase in personal accountability as the season’s progressed.

“I can. We’re still trying,” he said. “Every day we’re coming in, working hard, trying to find a way to improve.

“Today we went back to the basics. It’s trying to find a way to improve on it and try to find something that works.”

Kitchens had stopped the punishment running once the season started.

“We were trying to keep the legs fresh,” Bitonio said. “But, hey, we’ve got to figure out a way to stop doing them, so we’re trying.”

The Browns were penalized 13 times Sunday in the 27-13 loss to the Patriots, becoming the only team with two games of at least 13 penalties this season. They had 18 in the 43-13 opening loss to the Titans.

With the 2-5 start and the repeated mistakes, the Browns have spent the last few days talking about discipline, accountability and commitment.

“I feel like there’s a focus around here, there’s an urgency that we’ve got to make something happen,” said Bitonio, who had a holding penalty Sunday that wiped out a 12-yard gain. “It’s one of those things where everybody here, we’re grown men, we’re this, we’re that, but there’s something to be said in meetings if you’re taking the right notes, if you’re prepared, because everybody goes out there and plays hard.

“It’s how you prepare through the week and are guys taking the right notes, are guys focused in meetings, are guys reviewing the practice enough, are they watching enough film on their own? And those are the things that we have to continue to have to uptick to make sure we’re ready to go.”

The Browns didn’t make a move at the trade deadline Tuesday despite general manager John Dorsey’s quest to improve the offensive line, particularly with Washington left tackle Trent Williams. Kitchens wouldn’t comment when asked if a trade almost got done.

“You can ask John that,” he said. “I like our O-line. We are going to continue to try to get these guys better. They are committed to trying to get better.”

Trade deadline passes without a move

The Browns made a switch at left tackle for the Patriots game, as Greg Robinson was benched and replaced by Justin McCray. They also used Wyatt Teller for 11 snaps at right guard in a rotation with starter Eric Kush.

Quarterback Baker Mayfield said they’ll be confident in “whatever group of guys we roll in there” and was fine without a trade.

“Anytime you add pieces to this puzzle, it is good, but it has to be the right pieces and it has to fit,” he said. “We know exactly who we have and we have to establish that and get rolling.”

Kitchens wouldn’t reveal his plans for the line this week against the Broncos, and there’s a chance Robinson could retake the starting job.

Beckham had been a full participant in practice throughout the early part of the season as he dealt with a lingering hip injury, then the groin injury showed up on the injury report last week but he still practiced fully. Landry fell hard on the shoulder Sunday in the fourth quarter but returned to finish the game.

** Free safety Damarious Randall (hamstring) remained out of practice. He was hurt at the end of the Seahawks game Oct. 13 and missed the Patriots game.

With Flacco declared out, Brandon Allen will start and take his first NFL snap. He was a sixth-round pick of the Jaguars out of the University of Arkansas in 2016 and was claimed off waivers by the Broncos on Sept. 1 after the Rams cut him.

While that would seem to be a big break for the Browns, Kitchens had a stat to remind everyone that may not be the case. Since the start of 2015, 42 quarterbacks have made their first starts, going 16-25-1.

“Which is a lot better than you would just assume,” he said. “We have to prepare for him just like he is a starter. He is officially now an NFL starter. We have had experience with that before and guys have been successful against us.”

Kitchens said the Browns will study Allen’s preseason and college film to try to get a feel for him.

“We have not seen a lot of him, either,” first-year Broncos coach Vic Fangio said on a conference call. “We picked him up after the last cut and he only gets the few snaps a week with the first-team offense. We put him in there with the scout team some, but we have not seen a lot, either.

“I like the way he has looked when he has been in there in practice. I think he throws a good ball. He has some movement to him. I think that he is confident that he can lead the offense. I think he is going to go into the game looking forward to it and not too anxious.”

The Browns claimed linebacker Tae Davis (6-1, 224) off waivers from the Giants. He was undrafted out of Chattanooga in 2018 and has appeared in 18 games with five starts, totaling 37 tackles, two sacks and a pass defensed. He played in four games this year with a start.

The team had an open roster spot after trading defensive end Genard Avery to the Eagles on Monday.

** Jackson and former Bengals coach Marvin Lewis were picked to coach the NFLPA Collegiate Bowl, an all-star game, on Jan. 18 at the Rose Bowl. They are good friends, and Jackson worked for Lewis three times with the Bengals.

** The Browns decided to leave for Denver on Friday, a day early, because of the time difference and it being a day game. Kickoff is at 2:25 Denver time.

“It does not matter where we play the game,” he said. “We have to go in and take care of ourselves. That is it.”