Commentary: Browns still have time to turn it around, but there’s a lot to turn around 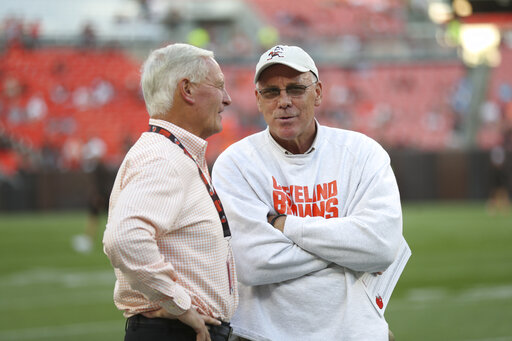 How many more like the last one before we concede that which is looking ominously imminent? All of it.

And the season isn’t even half over yet.

Or is this a drive-by overreaction?

I know, there’s still that conga line of tomato cans served up by the schedule maker the rest of the way. Four of the Browns’ last nine games are against teams (Denver, Miami, Cincinnati) that have a combined record of 2-21. But right now, the way they are playing, the Browns are a tomato can themselves.

How bad is it?

For the first time since they bought the team, the Haslams aren’t what’s most wrong with the Browns. Heck, they’re not even in the top five.

It’s like a mine cave in and a train wreck had a baby, and it’s the Cleveland Browns’ 2019 season.

During Sunday’s grotesque loss to the Patriots, the CBS crew of Jim Nantz and Tony Romo spent much of the game basically laughing at one of the teams. (Hint: it wasn’t the Patriots).

They are losing games by an average of almost 17 points per loss. Kitchens’ game management has gotten more bizarre by the week, and the players have not responded to his leadership.

The penalty madness started immediately, with that hideous 18-penalty for 182 yards 30-point loss to Tennessee in the first game of the season.

That seemed to set the tone for the carnage that’s followed. The mushrooming penalty problem smacks of too many players playing with zero attention to detail, perhaps caused by an apparent “what’s the use?” attitude, as though they feel their coach is hopelessly in over his head. Or maybe they just don’t care.

Either way, it reflects poorly on their level of professionalism.

It’s one thing for a season to go down the drain, but it’s another to let it go down the drain. Barring an unexpected turn of events the rest of the season, people are probably going to lose their jobs because of this mess.

As a famous former Browns coach once said — you might recall him; he was on the other sideline during Sunday’s grotesque-fest — “we can only go by what we see.”

What we see is hard to look at.

Yes, there’s still time to turn it around. The problem is there’s a lot to turn around. The head turner arounder is Dorsey, whose golden halo has been seriously dented. The honeymoon, quite clearly, is over. It may have ended the day Dorsey decided to flip the keys to the car to Kitchens, the likable magician, who when he took over the Browns’ offense last year instantly turned it from gruel to chowder.

That hocus pocus got him the head coaching job of a dead-in-the-water team that Dorsey had seemingly and rapidly revived.

It was a hot-button decision, to be sure, and one of the most important of Dorsey’s and Kitchens’ careers. Amid all the outside noise, Dorsey went with his gut and hired as head coach a career assistant coach.

Reaction to the hiring ranged from “This is great” to “Who?”

Now, seven games into a season that’s resembled somebody falling down a flight of stairs …

Oh, to be a fly on the wall for the one-on-one meetings between the two men.

The season is rapidly approaching code red status. The winning better start soon, and there better be plenty of it. Because this is not what anyone signed up for.

Dorsey gave Kitchens a massively-upgraded roster, and Kitchens has given Dorsey two wins in seven tries.

Kitchens remains adamant that he will continue to call the plays, a chore in which last year he flashed savant-like dexterity. But last year he wasn’t the head coach, too. This year he is the head coach, and the play caller as well. Given the dreary results so far, he hasn’t appeared very adept at either job.

With two weeks to prepare for the New England game, Kitchens’ team laid an egg the size of Martha’s Vineyard.

So they are where they are: 2-5, with nine games left.

The season is at a crossroads, and everyone needs to step up. For Dorsey, Kitchens, and the players, jobs, reputations and futures are at stake.

Analysis: With mistakes going uncorrected and discipline still lacking, there’s no reason to believe this team will go on a run
Browns-Broncos Preview: 5 things to watch, 4 key numbers