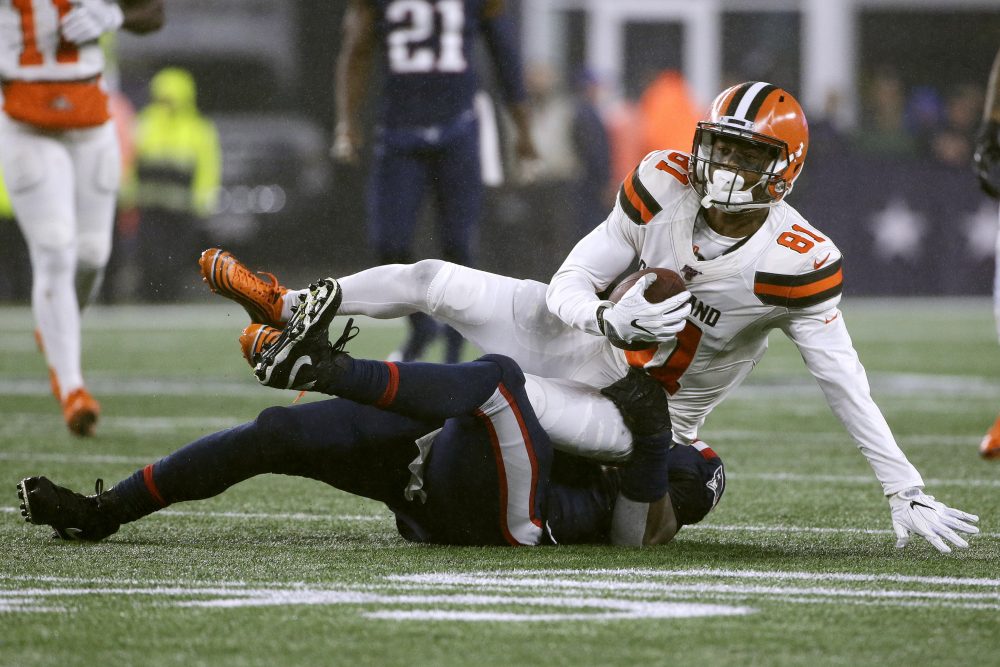 BEREA — Receiver Rashard Higgins has been waiting to get back in the game plan since Week 1.

He’s confident it could happen Sunday in Denver in a homecoming of sorts for the Colorado State alum.

“I’ve been getting in in practice, so I can’t wait till the Denver game,” he said Thursday.

The last seven weeks have been difficult and drama-filled for Higgins, who’s in the final year of his contract.

He sprained his knee in the opening loss to the Titans on Sept. 8 and wasn’t active again until Oct. 13, when he dressed but didn’t play against the Seahawks. He said he was healthy enough to play the previous week against the 49ers and was upset it took so long for the coaching staff to return him to the lineup.

Coming off the bye, he played 14 of 68 offensive snaps last week in New England — Antonio Callaway played 53 ahead of him as the No. 3 receiver — and caught one pass for 2 yards to bring his season total to three catches for 48 yards. He had a long catch negated by an offensive pass interference call.

Coach Freddie Kitchens has grown tired of talking about Higgins’ lack of playing time and said Monday the coaches felt Callaway was doing better. He also reiterated Higgins wasn’t ready to play against the 49ers and told reporters to ask Higgins about two weeks ago against Seattle.

“He may have a different answer now,” Kitchens said.

“Yeah, most definitely,” Higgins said. “Whenever I’m out there, my number’s called, I make a play, and that’s how we’ve got to go about things.”

Higgins said he heard his name mentioned in trade rumors but wasn’t worried before the deadline passed Tuesday afternoon.

He is looking forward to the return to Colorado and expects a lot of friends at the game. He’s also been feeling the love in Cleveland from fans eager to see him play and who believe he can help quarterback Baker Mayfield. He said they message him while he’s playing video games.

“Makes me feel wonderful,” he said.

What does “Hollywood,” who pretends to walk the red carpet after touchdowns, tell the well-wishers?

“They looked good today,” Kitchens said. “Sometimes it takes your body a little bit of time to recover and different people react differently.

“They got the reps that they needed to get.”

Beckham says he always has Mayfield’s back, will “jump in the fire with him”

Beckham said the groin injury is connected to the hip injury that limited him during training camp.

“It just kind of lingers and you just gotta deal with it,” he said. “It’s unfortunate. I wish it didn’t happen before the season, I could have been in a better place.”

Landry said he injured the shoulder earlier in the year and aggravated it on a hard landing against the Patriots.

** Defensive back Eric Murray (knee) didn’t practice after getting injured Wednesday. Kitchens said the team was awaiting test results, and an update is expected Friday.

** With Pharaoh Brown in concussion protocol and David Njoku on injured reserve, the Browns are down to two healthy tight ends — Demetrius Harris and Ricky Seals-Jones. Kitchens said they’d like to have three for the game Sunday, and an option is undrafted rookie Stephen Carlson, who’s on the practice squad.

Kitchens wouldn’t discuss the offensive line lineup, which means more changes could be coming to the highly scrutinized unit.

Justin McCray replaced Greg Robinson at left tackle last week against the Patriots, but Robinson remains a candidate to return to the starting lineup. Wyatt Teller played 11 snaps in a rotation with Eric Kush at right guard and could see more action, perhaps even as the starter.

“Obviously you do not usually see it in a game, but that is what our weekly practice is like where guys are rotating in and out,” center JC Tretter said. “Really does not affect anybody else I feel like.

“(Tretter) did well. He did some things. We got to watch the film, got to make some corrections, but he is a young guy who is anxious to learn, anxious to grow and that is the attitude you need to have.”

Despite a steady rain throughout the day and running back Nick Chubb at the ready, the Browns threw on their first four offensive plays in the loss to New England. They gained 10 yards total.

“Some of it plays into what you have in mind and some of it plays into if you are going to be in the RPO world, sometimes that is where the ball goes,” he said. “The short answer of it is you have run plays called up and the decisions you make to spin it on the perimeter. That is part of it.”

He took the specialists to FirstEnergy Stadium again Wednesday, and Siebert kicked about 20 field goals, mostly at the Dawg Pound end, where both extra point misses came.

Beckham dropped a back-shoulder throw Sunday when the ball bounced off his biceps.

“Honestly the ball was just in the light,” he said. “If I could have seen it, I would have caught it.”

** Wilks said he didn’t know second-year defensive end Genard Avery was going to be traded Monday when he played him only three snaps Sunday. He wouldn’t comment further on the move.

** Backup running back Dontrell Hillard returned punts against the Patriots after Landry had been in the role. Priefer said Landry or Beckham could still be used.

“We have to pick and choose our spots,” he said. “They are always an option.”