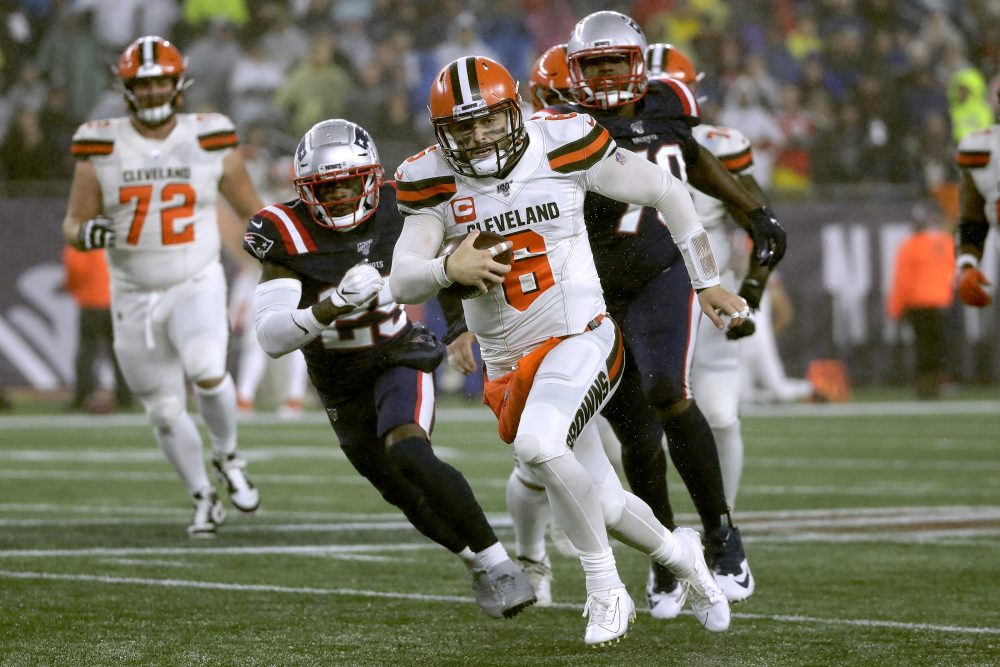 WHEN THE GOING GETS TOUGH

Baker Mayfield started his second-half surge last season in the ninth game. He needs to get going a week earlier this year, as the Browns are desperate for a win — and for their quarterback to find his way.

Mayfield still ranks near the bottom of the league in most statistical categories but he’s shown signs of progress in the last two games. He led three touchdown drives to open the Seahawks game, then handled himself well against a dominant Patriots defense that makes most young quarterbacks look like high schoolers.

The next step is for Mayfield to turn the baby steps into a victory. He could really use that after a week in which the biggest news was him storming out of an interview. The bad news for Mayfield is that the Broncos rank fourth against the pass at 194.8 yards a game. The good news is they have only seven takeaways, including five interceptions in eight games. Mayfield has thrown 12, tied for the most in the league with Tampa Bay’s Jameis Winston.

Cornerback Chris Harris is still in Denver after the trade deadline passed and is the only player in the league with multiple interceptions in each of the last seven seasons, giving him 20 in his career.

“You have a secondary that is making some plays, and in the games they play well their secondary plays well,” Mayfield said. “It starts up front and their guys play free after that.”

He must play better in clutch situations. His 27.7 rating in the fourth quarter is 38th of 39 qualifying quarterbacks — six interceptions, zero touchdowns — and he’s 28th of 29 on third down with a 62.8 rating. A playoff push won’t happen without Mayfield pulling his weight.

TWO FOR THE PRICE OF ONE

The Browns have had a hard enough time stopping one quality running back, and the Broncos bring a one-two punch in second-year players Phillip Lindsay (492) and Royce Freeman (359). They’ve combined for 851 rushing yards, trailing only Minnesota among running back duos.

To add stress to defensive coordinator Steve Wilks’ life, the Broncos use a similar zone running scheme as the 49ers — coordinator Rich Scangarello came from the Niners — and San Francisco rushed for 275 yards in a 31-3 win over the Browns on Oct. 7.

“I know that is going to be a film that they are going to watch, and they have probably already had some conversations amongst one another,” Wilks said. “We definitely have to be prepared for some of the things that hurt us in that particular game.”

Defensive tackle Larry Ogunjobi is confident they’ve fixed what went wrong against the 49ers and said it starts up front.

Lindsay and Freeman are also threats as receivers. Lindsay ranks third among second-year players with 652 yards from scrimmage and has four touchdowns, and Freeman is sixth with 541 and has two scores (Cleveland’s Nick Chubb is first with 873.) Lindsay had the second-best season for an undrafted rookie since the AFL-NFL merger in 1970 with 1,037 rushing yards, a 5.4 average and nine touchdowns, trailing only Indianapolis’ Dominic Rhodes, who had 1,104 in 2001. But the Browns shut down Lindsay in their late-season win, holding him to 24 yards on 14 carries.

“Speed, runs hard, great vision, knows how to press the hole, knows how to make the hole open up for him,” defensive tackle Sheldon Richardson said. “He presses the issue with the outside guys a lot. We’ve got to get our hats to him.”

The Browns gave up 170 rushing yards to Seattle following San Francisco but limited the Patriots last week to 79 and 2.9 a rush.

“I thought we did a great job coming off the ball, striking and shedding, and the linebackers did a tremendous job for us just playing downhill,” Wilks said.

The Browns (2-5) and Broncos (2-6) appeared evenly matched before veteran quarterback Joe Flacco was ruled out with a neck injury. Brandon Allen will take his place despite never having taken a snap in an NFL regular-season game, and the Browns must turn this perceived advantage into a game-changer.

“We’re never overconfident, but we’re definitely confident in our abilities and what we do,” Richardson said. “He has never taken an NFL snap but he is in the league for a reason. Treat them all the same. Execute the game plan.”

That starts with stopping the run and forcing Allen into difficult passing situations. Wilks could then unleash the dogs with all-out blitzes or try to confuse him by dropping seven in coverage. Either way, Wilks has stressed creating turnovers. The Browns have only eight takeaways on the season, including one in the current three-game losing streak.

“We have to find ways to get more takeaways to get the ball back to the offense,” he said. “We emphasize it, we talk about it and we work on it in practice. I think you have to put yourself in the situation in the game. I think that predicates sometimes based off your call and then also you just have to execute. That is the thing. We have to finish.”

Allen’s film resume consists of time at the University of Arkansas and in preseason games with the Jaguars, who selected him in the sixth round in 2016, and the Rams, who cut him after the preseason. The Broncos then claimed him off waivers, so they’ve never seen him up close in a game. He has some mobility, which could come in handy because the Broncos have allowed 26 sacks. If the Browns can get an early lead, they should be able to get after Allen and have the dominant performance that’s been missing.

The Browns insist they’re not taking anything for granted.

“He’s here for a reason, so you never underestimate your opponent,” Ogunjobi said. “Same way I prepared for (Tom) Brady I’m going to prepare for him.”

When second-year end Bradley Chubb was lost for the season with a torn anterior cruciate ligament, the Broncos pass rush became all about Von Miller once again. He had 1.5 sacks last week against the Colts, giving him 102 in his career, 30th on the NFL’s all-time list.

“He is the No. 1 cog,” Monken said. “You have to know where he is at all times because he can disrupt the game. He has for a number of years. It is not every concept you can double him in the run game and not every concept from a protection standpoint when you can chip, help or slide, so there are going to be times where we have to man up and be able to protect. There are other times where you are going to have to make sure that you get bodies on him.”

Miller has seven 10-sack seasons in his first eight years, and the 102 sacks are the most in the NFL since 2011. He’s tied for the lead with 25 forced fumbles. His .8 sack a game is third in NFL history for players with a minimum of 100 games, behind J.J. Watt and Reggie White.

“Obviously he is a great player,” Mayfield said. “I do think when he is on, the rest of the guys feed off that energy and how he is playing.”

Miller, end Derek Wolfe and nose tackle DeMarcus Walker all have four sacks on the season. With Chubb out, the Broncos are moving Miller some from his normal spot on the right side.

“He has a speed-to-power,” left guard Joel Bitonio said. “He used to just be a speed guy, but now he has that long arm that he sticks in there and it’s one of the more impressive things and they kind of game him around so he has kind of a two-way go to make things happen.”

THE HEAT IS ON

Coach Freddie Kitchens could really use a clean game. One with only a handful of penalties, zero coaching blunders and that ends in a victory.

Kitchens entered the season under intense scrutiny. That’s what happens to a first-year coach who’s given a talented roster. When the expectation is to win big, losing is even tougher for people to accept. So the 2-5 start has prompted the vultures to begin circling. The only thing that will stop them is an abrupt change in results, coupled with better play calls and a much smoother sideline operation.

Kitchens was buttoned-up in his news conferences this week, and his players like how he’s dealt with the struggles.

“He’s fine,” left guard Joel Bitonio said. “Every Monday, win or lose, his focus has been pristine. If the refs are making these calls, we have to be the ones to fix this, and it’s been his message all along and he’s really trying to push it. We either fix it and we start winning games, or the season’s going to be a loss.”

“He’s handled it well,” Chubb said. “He’s shouldered most of it, put it on himself, and that’s one of the signs of a great leader, just put it on himself. I have Freddie’s back. I’m here to support him. I just hope we can turn things around for him.”

Touchdown catch by Browns wide receivers this season — Odell Beckham Jr.’s 89-yard catch-and-run against the Jets. The other five TD catches were by tight ends.

Super Bowl appearances by the Broncos, tied for second in NFL history

Sacks by Myles Garrett in 34 career games, the most by a Browns player in his first three seasons

Commentary: Browns still have time to turn it around, but there’s a lot to turn around
Prediction: Browns 24, Broncos 17