Broncos 24, Browns 19: The breakdown — thumbs up, thumbs down, the matchups 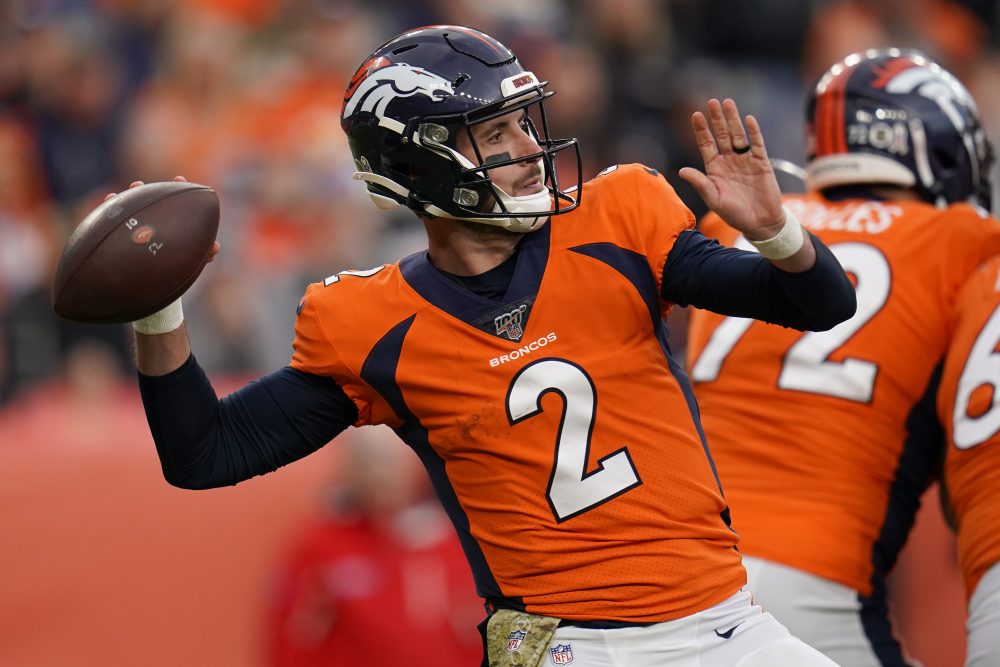 He took down Baker Mayfield and the Browns.

Not too shabby for a guy that had never played in an NFL regular-season game.

Allen went 12-for-20 for 193 yards, two touchdowns and a 125.6 rating. He took three sacks but didn’t rattle and led the Broncos past a Browns team desperate for a win after replacing veteran Joe Flacco, who was lost for the season with a neck injury.

“He played well. He managed the game very well, made the throws, I think the touch on some of his passes was great,” Mayfield said. “He saw the field well. At times he delivered the critical pass they needed and they ran the ball well with Phillip Lindsay. And obviously Courtland Sutton played well on the outside. He did a great job. So I commend him for that.”

Mayfield was the No. 1 pick in the 2018 draft so everyone expected big things from him right away. Allen was a sixth-round pick in 2016 and is on his third team. The underdog had his moment.

“He did well. I thought he ran the offense well, showed a little mobility, made some good throws, missed a few, too,” Broncos coach Vic Fangio said. “We’re not ready to put him in Canton yet, but overall pleased with the way he played.”

The Browns issued a rebuke of Whitehead’s posts and said more action would be taken. It’s possible the Browns cut Whitehead after he threatened radio host Dustin Fox and fans, using profanity and racially charged language on Twitter and Instagram.

He had played well for much of the year and had started to emerge as a leader on the defense, but Sunday’s performance on and off the field may have been too much for the embattled Browns to accept. The missed tackles came on Noah Fant’s 75-yard touchdown and Lindsay’s 40-yard run that set up a field goal. Whitehead blamed a broken hand, which had never been disclosed.

If it weren’t for Whitehead’s meltdown, cornerback Denzel Ward would’ve taken this spot. He gave up a third-down completion then a touchdown catch and was also penalized for a hold.

Make it a sequence.

The Browns had the chance to complete a rally and take a lead. They reached the Denver 14-yard line with eight minutes left in the third quarter on a great one-handed catch by Jarvis Landry over the middle for a 19-yard gain. A 1-yard Nick Chubb run (the officials missed a face mask) and a 6-yard pass to Landry in the flat left third-and-3 from the 7.

Here’s where it went bad.

Coach Freddie Kitchens went to his third-down personnel package of three receivers, a tight end and running back Dontrell Hilliard. Instead of Chubb getting the handoff, Hilliard ran for 2 yards on a draw. Kitchens went with the same package on fourth down and called a quarterback sneak. Mayfield thought he had the yard he needed but was twisted back and the officials spotted him short. He convinced Kitchens to challenge, but the call stood.

“When I looked over the ball was crossed,” Mayfield said. “I’m sure the TV copy showed how they turned my body a little bit and the ball was a little bit closer to the measurement than I think what it was portrayed. It’s a tough one.”

Kitchens explained not having Chubb on the field.

“No reason why other than that was a play that we run with Dontrell on the third down,” he said. “Dontrell is more of our third-down guy.”

The defense finished the game-deciding sequence by allowing a 95-yard touchdown drive on seven plays. Instead of leading for the first time, the Browns trailed 24-12 with 1:06 left in the third quarter.

In the Super Bowl era, only one team has made the playoffs after starting 2-6. The 1970 Bengals were 1-6 and won seven straight in a 14-game season, according to ESPN Stats & Info.

Games the Browns trail the Baltimore Ravens by in the AFC North standings — with eight to play.

“I think it’s more of us. That is a great defense over there, but we’ve got to execute better and we’ve got to find a way to get in the end zone and we were down there way too many times to come out with three points. At least score once or twice more. I’m putting it on us, find a way to execute and get in the end zone.” — Running back Nick Chubb on going 1-for-5 in the red zone

The Browns scored one touchdown in five trips inside the red zone and went 0-for-2 on fourth down. That about sums it up.

The Broncos made the most of their 43 plays, scoring 24 points and averaging 7.0 yards per play. They had the perfect game for inexperienced quarterback Brandon Allen and executed it.

The Browns can’t hold momentum. After two Cleveland scoring drives in the first half, the defense allowed the Broncos to answer and regain control. Then it sealed the defeat by giving up a 95-yard drive led by Allen.

Denver kept Nick Chubb from going off — 20 carries for 65 yards — and won the game in the red zone.

Rookie Austin Seibert was perfect on four field goals and an extra point, improving to 14-for-14 on the year in field goals. Rookie punter Jamie Gillan made a big hit after a 20-yard return.

The Broncos had a 32-yard kickoff return to go with the punt return.

Even when the Browns cut down on penalties and don’t turn it over they lose. Freddie Kitchens would be pulling out his hair if he had any. The play calls and execution remain missing at the most important moments.

Vic Fangio, another first-year coach, won with a quarterback who’d never played. That says a lot in this league.

Prediction: Browns 24, Broncos 17
Analysis: Plenty of blame to go around as dysfunction resurfaces