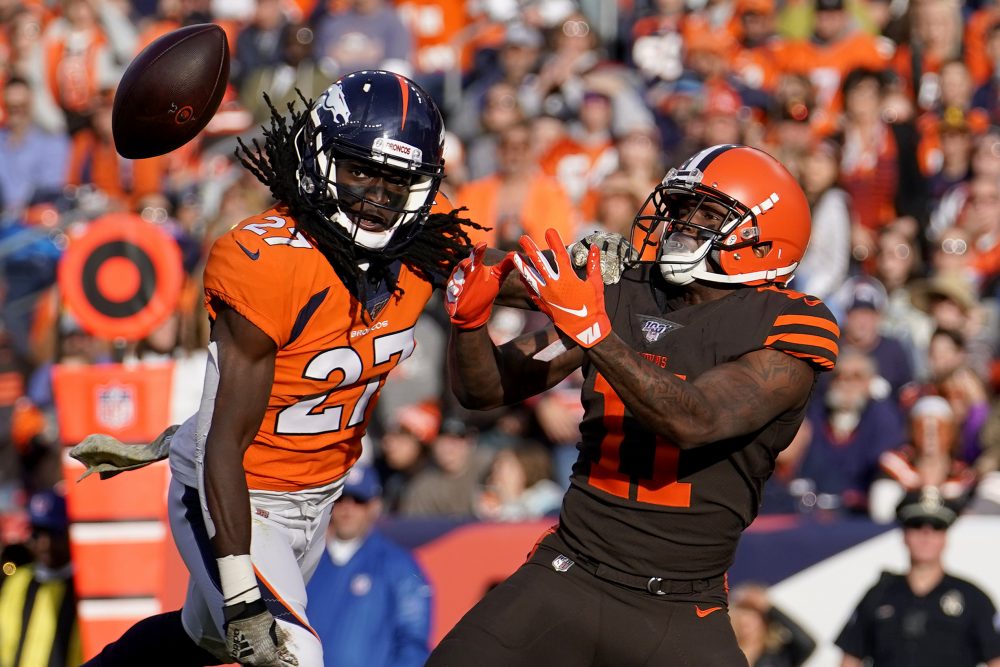 DENVER — Mile High misery must be in the Browns’ DNA.

The Browns were desperate for a win Sunday to stop a losing streak and start a run toward the playoffs. They acknowledged the season slipping away at its midpoint and the need for things to change.

Then they flew to Denver and were beaten by a Broncos team with a worse record and a no-name quarterback.

This defeat didn’t end the season or cost the Browns a trip to the Super Bowl like those in the AFC championship games in the late 1980s. But if history is any indication, it ended their shot at the playoffs.

The Browns fell to 2-6, and no team with that record has made the playoffs since divisional realignment in 2002. The Browns have lost four straight and show no signs of figuring out things under first-year coach Freddie Kitchens.

“Stats like that are meant to be broken,” subdued quarterback Baker Mayfield said. “And the guys within our building are going to be highly focused and highly detailed on doing their job.

“So going forward, it’s gotta be singular focus like I keep saying. We don’t need to look up till we’re at the very end. And have no regrets about how we attacked and finished the season.”

Whether entirely fair or not after eight games, there will be plenty of questions about Kitchens’ job security. He was given a talented team with playoff expectations and hasn’t gotten enough out of it.

The Browns, who entered averaging 10 penalties a game, cut it to five for 40 yards and didn’t have a turnover for the first time all year. They still lost.

“It really doesn’t concern me,” Kitchens said when asked if job security was on his mind. “It’s not my decision. I’ve never worried about it before, I don’t worry about it now and I won’t worry about it in the future. I’ll just do the best job I can do.”

Mayfield wanted Kitchens hired at the end of last year and had his back Sunday night.

“It’s a topic for you guys,” he said of the job security. “Within our building we know exactly what’s wrong. We haven’t executed. We had a good plan, we just haven’t executed it.”

The offense was stopped inside the red zone too often and the defense didn’t get stops at critical times, despite facing quarterback Brandon Allen, who’d never taken a snap in an NFL game.

They are themes that have carried through the season.

The Browns settled for four field goals from rookie Austin Seibert — he’s 14-for-14 in his career on field goals — and scored only one touchdown on five trips inside the 20-yard line.

“The field tightens. You have to be more precise,” Kitchens said.

The worst visit ended with Mayfield getting stopped short on a fourth-and-1 sneak from the 5.

He dived over the right side and was twisted back by a defender. He was certain he made it and implored Kitchens to challenge the spot. He lost the challenge and a timeout.

“He has full trust in me and I said I got it,” Mayfield said. “But they didn’t have enough evidence to overturn it.”

“I thought we could get a quarterback sneak for a yard,” he said before explaining the challenge. “He had to get to the 4-yard line, and I thought he was there.”

The Broncos (3-6) took the momentum and multiplied it, marching 95 yards for a touchdown. Phillip Lindsay ran the last 30 yards for a 24-12 lead with 1:06 left in the third quarter. He finished with nine rushes for 92 yards and the score.

The Broncos ran only 43 plays to the Browns’ 73 and lost the yardage battle 351-302 but made up for it with long gainers. That they came in pivotal spots has been typical for an underachieving Browns defense.

Rookie tight end Noah Fant had a 75-yard touchdown in which he was wide open across the middle on a crossing route after play-action, then safety Jermaine Whitehead, cornerback Greedy Williams and linebacker Adarius Taylor missed tackles before Fant finished the catch-and-run down the left sideline.

Lindsay later set up a field goal with a 40-yard run. Both drives came after Cleveland field goals had trimmed the deficit.

The Browns got within five points with receiver Jarvis Landry’s first touchdown of the year, a 9-yard catch-and-run with 10:47 left. The defense got the necessary stop but the offense couldn’t score again.

It reached the 28-yard line, but running back Nick Chubb lost 3 yards on third-and-1 and Mayfield threw incomplete on fourth-and-4 with 3:19 left. He tried to fit the ball to Landry over the middle, but cornerbacks Kareem Jackson and Davontae Harris broke it up.

“Just trying to get an underneath route coming through,” Mayfield said. “The details of, we have to have the rub route, and partially that’s on me and so we just have to do our job each play.”

Beckham appeared to have an advantage over cornerback Chris Harris as he ran the route.

“It’s one thing to be able to take a shot like that on a fourth-and-4, but we felt like we had something good drawn up and that we should execute it,” said Mayfield, who was 27-for-42 for 273 yards, a touchdown, two sacks and a 90.7 passer rating.

Beckham had five catches for 87 yards, including a couple of highlight grabs, as he surpassed 6,000 yards for his career.

“We’re rushing to the line, the crowd’s loud, it was just one of those plays and he threw to it to somebody who’s sure-handed and it was a tough catch and they ended up breaking it up,” Beckham said. “But it’s something I’m not mad at. I would throw to 80 on fourth down 10 times out of 10.”

Another drama-filled day for Beckham

The Browns were out of timeouts — Kitchens spent the final one before the fourth-and-4 — and one first down allowed Denver to run out the clock.

“I don’t think we’ve got anybody there that’s going to give up or throw in the towel,” Kitchens said. “We’ve still got eight games left, so we’ve got to do something with those eight games.”

The Browns still haven’t won two years in a row in Denver. They had lost 11 in a row here before a win last year.

In his first playing time, Allen handled himself well. Although he won’t be compared with John Elway, he was 12-for-20 for 193 yards, two touchdowns, three sacks and a 125.6 rating.

“You can keep moving forward or we can keep looking behind in the rearview,” Beckham said. “So leave this loss here, get on a plane, get back at it, got a tough game next week, that’s all we can worry about.

“It’s just tough when you don’t play a complete game and there’s stuff left on the field and plays left on the table, it’s hard to beat any team in the NFL.”