Mailbag: Should fans be nervous about today’s game? What’s been Freddie Kitchens’ biggest problem? Does NFL have it out for the Browns? 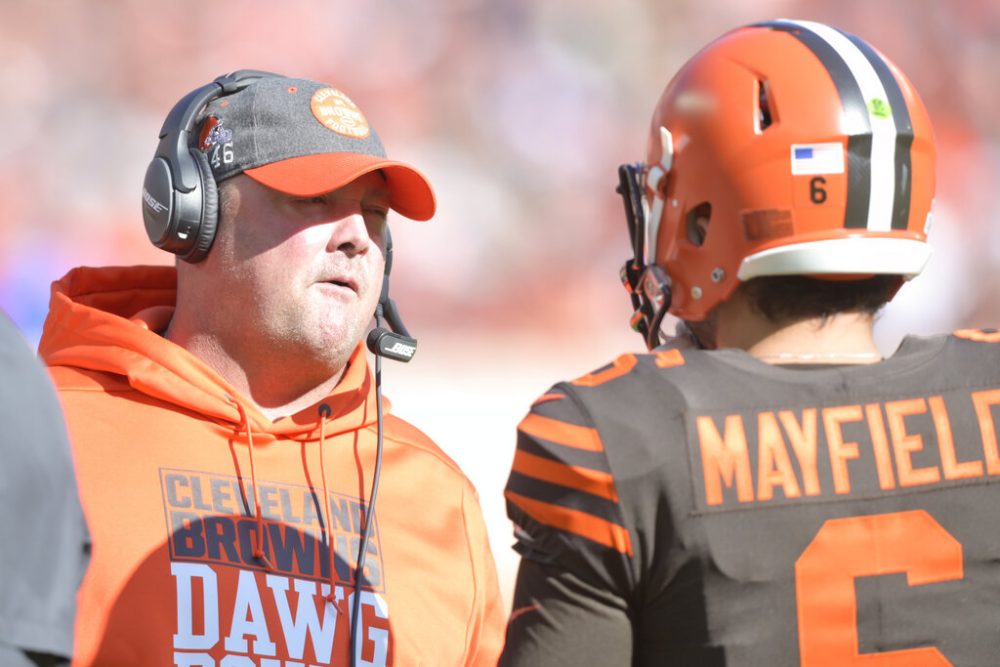 Q: Am I the only one feeling nervous about this game vs. Denver? I just don’t think the Browns have done enough to change this pattern, not signing an offensive lineman, not sure what Freddie Kitchens has really done during practice to reduce penalties, improve play calling. Can I relax?

I don’t want to give you a false sense of security, but I feel good about the Browns’ chances, especially after the loss of quarterback Joe Flacco. When I watched the Broncos’ 15-13 loss to the Colts last week, I expected a close game that could go either way — that’s just how the Broncos play, with a strong defense and conservative offense.

But the loss of Flacco changes things for me. If the desperate Browns can’t beat Brandon Allen in his first NFL action, they don’t deserve to be in any more discussion about the playoffs.

Q:
If things don’t improve, what would be the nail in the coffin for coach Freddie Kitchens if you were general manager John Dorsey: penalties, Baker Mayfield regression, lack of Odell Beckham Jr., stubbornness to change, game management?

A: We’re getting ahead of ourselves a bit, but I understand the question so … I’d start with game management. That’s something entirely within the coach’s control, and Kitchens has fallen well short in that area. I keep flashing back to the end of the first half against the Seahawks and the end of the game against the Rams. There have obviously also been issues with replay challenges and general sideline confusion.

The previous nails, in order of importance: Mayfield’s regression and penalties.

Q: What rationale might the league have for what appears to be harmful conduct toward this franchise: zealous enforcement of virtually every nuanced penalty imaginable, especially whenever a sizable gain occurs; a remarkably formidable early season schedule for an outfit that was known to be both young and in need of time for its many newcomers to gel and settle into becoming a true team; conversely spotting AFC contenders New England and Baltimore with cupcake starts certain to both rest them and result in favorable records; start times so irregular that they also tested the mettle of the staff and roster? This cannot all be coincidental.

What is more, complaining about any of this is identified as childish, lacking maturity and sportsmanship, certain to have them dismissed, mocked and gotten away with due to the brainwashing those growing up with the sport unwittingly subjected themselves to — a perfect environment for manipulating outcomes without consequence. At a time when gambling grows even more prominent and is promoted like so many other societal addictions separating Americans from their money.

A: You’re not going to like my answer. Which probably isn’t unusual.

I see your point about the schedule but don’t think the NFL front-loaded it to hurt the Browns. I think it was all about getting them on television when they’d certainly be relevant.

As for the officiating, I’m torn. I don’t like using it as an excuse and don’t think the officials purposely make calls to hurt the Browns. Having said that, I talked to a player this week who was adamant that traditionally losing teams, including the Browns, don’t get calls. And winners like the Patriots and Seahawks get them.

Finally, I would never call you childish, but I’m not really one for conspiracy theories.

Q: Nearly 30% of the team penalties are pre-snap. With new personnel and a new coach, it seems like Freddie Kitchens is running too many sets and getting too cute with this offense. Wouldn’t this team benefit from fewer sets and plays and getting back to the basics by focusing on the run?

A: What they’ve been doing definitely hasn’t been working, and something needs to change. The Browns are still working through the collaboration of a new coaching staff on offense and I agree a return to basics would be beneficial, along with relying on Nick Chubb to steady the offense.

The issues before the snaps have been abundant. The plays have come in later than desired at times, the receivers have struggled to get lined up properly and everyone from linemen to receivers have false started. The last point was particularly troublesome to Baker Mayfield following the loss to the Patriots. He said they’ve been unable to use different cadence to keep the defense honest or get it to jump offsides because his guys keep jumping to commit penalties.

Kitchens went back to punishment running for penalties in practice during the week, so we’ll see if that helps cut down on the flags. As we all know, the Browns lead the league with 70 penalties through seven games. And the pre-snap ones have been a point of emphasis.

Q: Wyatt Teller rotated into right guard for a small number of snaps last week. I see that continuing with a few more snaps vs. Denver. Do you concur, Scott? I think management believes Eric Kush has to be wound down then benched for the playoff push.

And as bad as Justin McCray played at New England, Greg Robinson should be back at left tackle, unless GM John Dorsey’s ego has him double down.

A: It looks like Robinson is going to be back starting at left tackle after a one-week benching. The coaching staff was trying to send a message, and Robinson seemed motivated to win back his job when he spoke before the Patriots game. And McCray’s first start at left tackle didn’t earn him a second.

As for right guard, I would be surprised if Teller didn’t play more against the Broncos and possibly start. Dorsey didn’t trade for him to watch him sit, and he’s on a tryout with rookie Drew Forbes eligible to return this week against the Bills.

Q: With the same roster does Hue Jackson win more games than Fred? Asking for a friend.

A: That’s a landmine of a question. And I’m going to take the easy way out — Jackson would be 2-5, as well.

I know Jackson was a bad coach, and I’m not ready to say that about Kitchens, despite the ugly start. But that doesn’t mean Jackson wouldn’t have done just as well or better through seven games. Even it that were true, that shouldn’t be a referendum on Kitchens’ future.

Mailbag: Does Nick Chubb need 25 carries for upset of Patriots? What’s up with Genard Avery? And what about Rashard Higgins?
Mailbag: Are GM John Dorsey and coaching staff on same page? Can an offensive overhaul happen in a week? Does the organization overvalue potential?