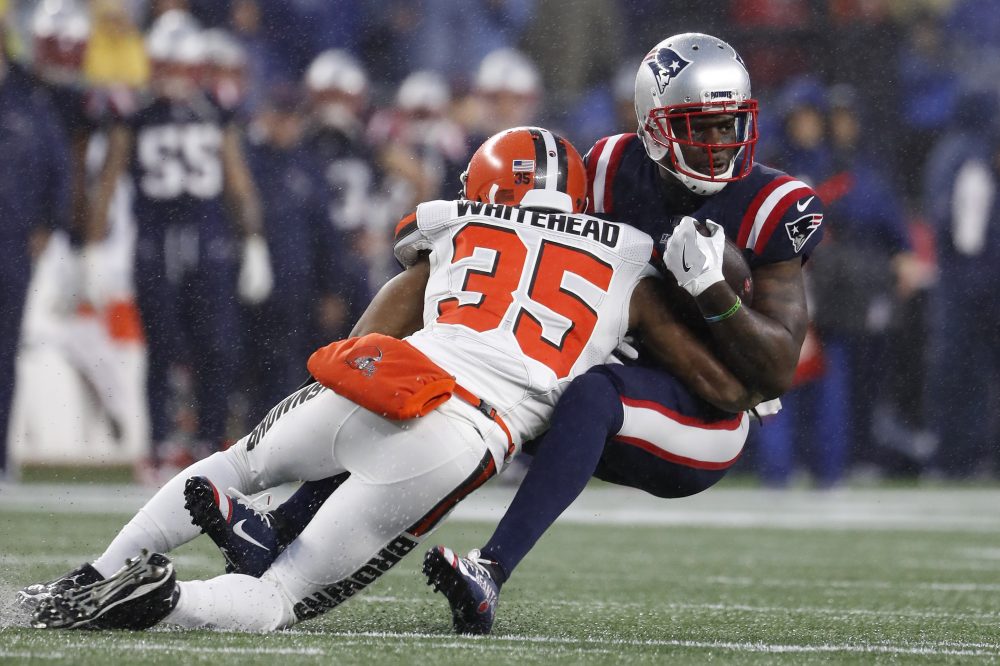 DENVER — Safety Jermaine Whitehead was rebuked by the organization and will face further punishment for postgame social media comments in which he threatened radio host Dustin Fox and fans in expletive-laden posts.

“Jermaine Whitehead’s social media posts following today’s game were totally unacceptable and highly inappropriate,” a Browns spokesman said in a statement Sunday night. “We immediately spoke with Jermaine upon learning of these comments. The Browns in no way condone that type of language or behavior. This matter will be further addressed internally.”

Whitehead was steaming in the concourse outside the locker room following the 24-19 loss to the Broncos. He declined to talk to reporters earlier but didn’t stay quiet on Twitter or Instagram after his Twitter account was suspended for violating the company’s rules.

“Crazy world. They line it up and say anything in the book too you,” he wrote on Instagram. “They tell you take the high road, when yo whole life you was taught to meet fire with fire. I do apologize for my performance, but having a broke hand and a strong fear of letting my team down is my downfall. Whatever happens happens. Ain trippin. They probably gone still talk crazy but this me getting smoke off my chest. …”

His social media meltdown seemed to start with a tweet from Fox, who has an afternoon show on 92.3 The Fan and also works for the Browns radio network.

“Whiteheads effort tackling today is a joke.” he tweeted.

Whitehead’s replay was full of expletives and racially charged.

He was the first of three Browns to fail to bring down rookie tight end Noah Fant on his 75-yard touchdown, trying to knock him down with a shoulder. He then missed a tackle of running back Phillip Lindsay on a 40-yard run.

Whitehead referred to a broken hand. He was listed on the injury report all week but was a full participant in practice.

Defensive end Olivier Vernon injured his right knee on Lindsay’s 16-yard run that sealed the game. Vernon stayed down on Denver’s sideline then limped badly as he walked toward the tunnel.

He had his leg wrapped after the game and declined comment.

** Tight end Ricky Seals-Jones was knocked out of the game with a knee injury late in the second quarter.

He caught a short pass over the middle and took a direct shot to the right knee from cornerback Kareem Jackson. He jogged off the field after staying down for a while and grabbing the knee but was ruled out at halftime.

The Browns were down to two tight ends, Demetrius Harris and undrafted rookie Stephen Carlson, who made his NFL debut. Pharaoh Brown (concussion) was inactive, and David Njoku (broken wrist) remains on injured reserve.

Carlson, a Princeton alum, was signed from the practice squad Friday because of Brown’s injury and served as a lead blocker in the run game. He was targeted once but didn’t have a catch.

** Left tackle Greg Robinson left the game late with an ankle injury and was replaced by Justin McCray.

Coach Freddie Kitchens didn’t have an update on the injured, saying they’d have more tests Monday.

“Trying to get a little more stout inside,” Kitchens said. “But we’ll evaluate them and see how they did.”

Robinson had started 14 straight games, including the first six this season, before being benched last week against the Patriots coming out of the bye week. He was replaced by McCray, who’s a natural guard and had never started at left tackle.

The coaching staff wanted more awareness and consistency from Robinson and was trying to send a message with the benching. Robinson, who signed a one-year, $7 million extension in February, apparently received it.

“After (the benching) happened, he had probably his best two weeks of practice,” Kitchens said. “We felt like he could hold up out there pretty good. I’m not certain on stats and everything, but I think he did for the most part.”

Teller made his first start with the Browns. He started seven games for the Bills as a rookie last year after being a fifth-round pick. Teller played nine snaps against the Patriots, working in a rotation with starter Eric Kush.

Running back Nick Chubb was determined to make up for this two costly fumbles last week in a loss to New England and ran as hard as ever, even carrying defenders downfield. But the Broncos were committed to keeping him from taking over the game, holding him to 65 rushing yards, a 3.3 average, and four catches for 26 yards.

“Yeah, I was pretty shocked when I looked up and saw the amount of rushing yards we had because I felt like we had more,” quarterback Baker Mayfield said. “Nick ran very well and ran very hard. The Nick Chubb way that we always see. They did a good job of rolling guys down or keeping safeties low. They did a good job of playing physical up front on critical downs.”

Chubb has at least 75 yards from scrimmage in eight straight games. His final carry lost 3 yards on third-and-1 on the Browns’ final possession as Denver blitzed off the edge.
“They had us outnumbered, so a good play, good call on their end,” Chubb said.

The Browns’ inactives featured no surprises.

They were without two of their top four safeties, as Randall (hamstring) and safety/nickelback Eric Murray (knee) were ruled out Friday.

Murray was injured Wednesday in practice and had knee surgery Friday. The Browns said his status will be evaluated on a week-to-week basis.

Murray had taken over the nickelback role, which returned to TJ Carrie on Sunday. Juston Burris was used alongside starters Morgan Burnett and Whitehad in three-safety packages.

** For the Broncos, Fant started in place of Jeff Heuerman (knee), Elijah Wilkinson started at right tackle for Ja’Wuan James (knee) and Davontae Harris at cornerback for Bryce Callahan (foot).

Austin Seibert’s four field goals were the most in a game by a Browns rookie. Jeff Jaeger in 1987 and Zane Gonzalez in 2017 had three.

“You know what we say? We’re gonna start to wake the sleeping giant tomorrow,” Dorsey said.