A day in the life of Odell Beckham Jr.: A cleat change, more frustration and controversy and another loss 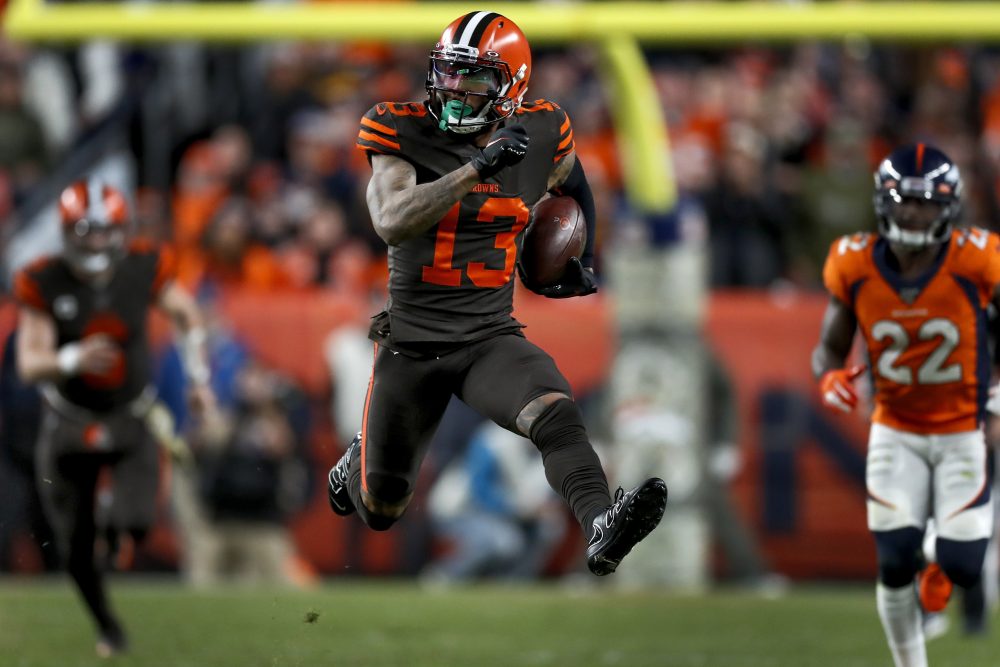 DENVER — A league-mandated cleat change at halftime, a couple of jaw-dropping catches, frustration from his overall lack of impact inside another loss, a post-game explanation.

A day in the life of receiver Odell Beckham Jr. is usually filled with drama and controversy. It can get wearisome.

“I just want to win a football game. That’s all I want to do,” coach Freddie Kitchens said Sunday following the 24-19 loss to the Broncos.

He was responding to a question about Beckham and receiver Jarvis Landry being forced to change cleats or they wouldn’t have been permitted to play in the second half. Kitchens could’ve meant anything involving Beckham.

He caught five passes for 87 yards, including a 27-yarder in which he plucked the ball out of the air on an out route with cornerback Chris Harris close in coverage to set up a touchdown pass to Landry. Beckham followed with a 39-yarder on the final drive on an in route against Harris in which he reached out to grab the ball, corralled it, juggled and ran down the field.

But the Browns were stopped on fourth-and-4 to lose their fourth straight and fall to 2-6. CBS sideline analyst said Beckham walked off the field after the failed fourth-and-4 and said he couldn’t get the ball “to save my life,” according to a tweet from NFL Network’s James Palmer.

“It was a tough loss,” Beckham said twice when asked about the comment.

When reporters followed up, he said he didn’t recall saying that and didn’t know who Feely was.

“I’m not going to respond to that,” Kitchens said. “We need to win a game.”

Quarterback Baker Mayfield and Beckham, who surpassed 6,000 receiving yards for his career, are still searching for a complete connection in their first year together, and Mayfield was asked about the end-of-game quote.

“We made a step in the right direction of even though teams are going to bring coverage over the top, still finding ways to get him the ball,” he said. “Obviously we see what type of game-changing plays that he can make, have to continue to try to get him the ball. At the same time, when teams do want to take numbers, we have to play the numbers game a little bit. He understands that.

“He’s frustrated because we’re losing. We all are. So we understand that. To take his quote that he said, he always wants to be the answer and the solution to the problem. I understand that, I wish I could be able to help it out more and we’ll continue to find ways to get him the ball.”

At 2-6 and trailing the Ravens by four games in the AFC North, the much hyped Browns would need a miracle to reach the playoffs. So Beckham will most likely be stuck on one postseason game in his six-year career.

He was asked how the team can avoid splintering.

“We have no choice,” he said. “We haven’t broke up so far. I don’t know what’s going to make us do it now. Just keep winning. Focus on us, let the rest of the stuff handle itself.”

As for the cleats, he opened the game in a white pair with colors on them inspired by the “Joker” movie. Landry wore gold cleats with orange.

They blamed the need to switch on a midweek decision to go from white jerseys to the all-brown uniforms.

“I really wasn’t going to say nothing, but if I don’t say something then it’s just going to be used against me,” Beckham said. “I have a deal with Nike. In June and July, we sit down, we map out the cleats. This week, on Wednesday or Thursday, we switched jerseys from the white to the all brown, so I had no cleats left to wear. “The black ones that I was wearing for the rest of the game, for some reason, were hurting my feet, so I went to the ones that were most comfortable. It’s only a big deal to the people who are talking about it. When I have cleats on my feet they could be hot pink, lime green, it’s never going to affect me, it’s not something I worry about while I’m running routes, reading coverages and trying to win a game, so it was just tough.” 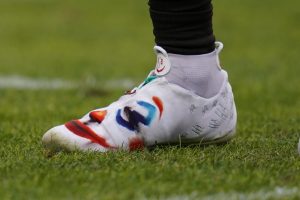 The cleats worn by Odell Beckham Jr. on Sunday in Denver.
AP

Mayfield came out firing, with high, hard passes whistling off the hands of Beckham and Landry.

“Our receivers came back and said they were coming out a little hot, so I toned it down a little bit,” said Mayfield, who shaved twice after arriving at the stadium and finished the day with a mustache. “But it’s just something, in there, plays need to be made, but I understand that from them.”

Beckham has stayed on message all season. He wants to be an important piece on a winning team.