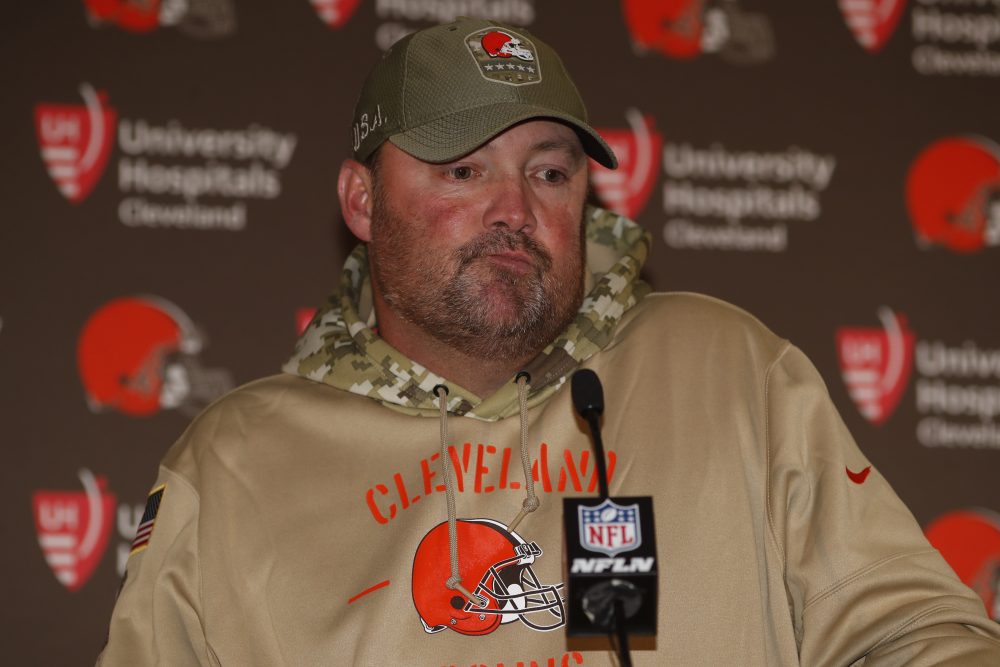 DENVER — If the players followed the game plan as well as coach Freddie Kitchens stuck to his script Monday at his day-after news conference, the Browns wouldn’t be 2-6 and Kitchens wouldn’t be fielding questions about his job security.

From the overall struggles to the red zone failures that were the main culprit in the 24-19 loss to the Broncos on Sunday, Kitchens had a go-to answer.

The Browns went 1-for-5 inside the 20-yard line, getting one touchdown and four Austin Seibert field goals. Turn one of the field goals into a touchdown, and the Browns would’ve only needed a field goal in the final minutes.

“We did not score enough touchdowns in the red zone or the conversation would be different,” he said in Berea. “We have to play better red zone football.

“You have to be more precise in everything you do, whether it is running, blocking, receiving, running routes, throwing, everything.”

The most blatant example of a lack of execution came in the second quarter on a second-down throw to tight end Demetrius Harris in the back of the end zone. The Broncos blew a coverage, and he was wide open. Baker Mayfield made a good throw, but Harris didn’t know where he was and didn’t try to get his feet down inbounds.

It should’ve been an easy touchdown. It’s a route the Browns practice just about every day.

“I think Demetrius will be the first to tell you that he has to have better awareness on where he is on the field,” Kitchens said. “It was an uncontested catch. You have to be precise with your landmarks so the little details can never get lost.”

The Browns were also stopped inside the 5 on a Mayfield sneak. They believe he got a bad spot, but a replay challenge was unsuccessful.

The issues against the Broncos aren’t isolated. Efficiency in the red zone has been a problem all year.

The Browns have scored touchdowns on 12 of 26 trips (46.1 percent) and rank 25th in the league, which is quite a drop-off after finishing last season ranked sixth at 66.7 percent.

Kitchens, who called plays for the final eight games last season and is in his first year as a head coach, was asked if the red zone plan needs to be overhauled.

“I think we need to execute better,” he said.

The Browns also had drives stall at the Denver 21- and 28-yard line, so seven of 10 possessions reached scoring territory. Mayfield’s sneak and the fourth-and-4 in the final minutes didn’t net points.

Mayfield said after the game he thought the plan was good for the scoring zone but the execution lacked.

Throwing the ball to receiver Odell Beckham Jr. would seem to be a solid plan of attack, but Kitchens and Mayfield keep saying it’s not that simple.

“I think that is an easy answer, but that answer does not always exist,” Kitchens said.

Beckham has just three red zone targets all season, and his only touchdown came from 89 yards. In his five seasons with the Giants he had 25 red zone touchdowns, which ranks in the top 10 in the league over that span.

“It’s tough. I get down there, teams are going to double. We’ve just got to find our other options,” he said after the game. “We had some opportunities, we just didn’t make the most of them and that gets redundant saying, but when you get down in the red zone, at least two out of those four times you’ve got to come away with seven. Sh–, if we come away with one out of four, we’d be good, but just got to work on it, back to the drawing board.”

No team that started 2-6 has made the playoffs since divisional realignment in 2002, but Kitchens’ message to his players was to keep looking forward.

“These first eight games do not matter,” he said. “It is not where we want to be, but it is where we are and that is who our record is so we have to own that. But we also have to recognize the fact that we have a new week this week that we have to prepare for or else we are going to be answering or talking about the same things that we were talking about last week. We need to rectify our problems and get them fixed this week for this Sunday’s game and have different results.”

The Browns trail the Ravens (6-2) by four games in the AFC North after Baltimore knocked the Patriots from the ranks of the unbeaten Saturday night.

A day in the life of Odell Beckham Jr.: A cleat change, more frustration and controversy and another loss
Baker Mayfield says he’s trying to make his teammates better but needs to be able to trust them