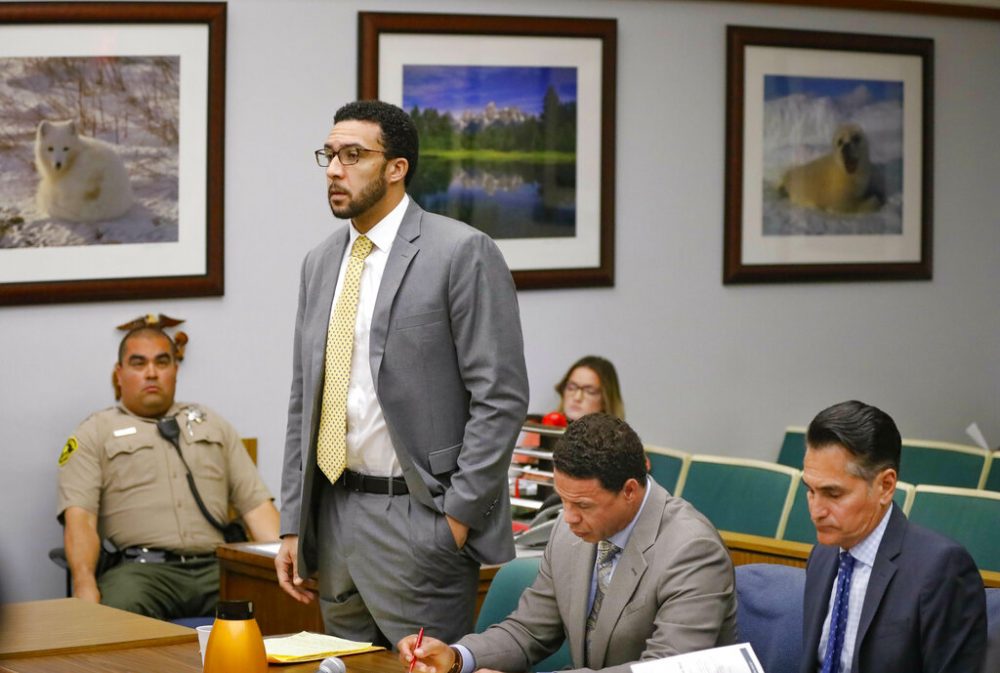 VISTA, Calif. — Former NFL player Kellen Winslow Jr. pleaded guilty Monday to raping an unconscious teen in 2003 and to sexual battery involving a 54-year-old hitchhiker in a deal that spared him the possibility of life in prison.

Winslow initially hesitated and seemed to agonize over his decision.

He asked the judge for more time before he finally entered the guilty pleas moments before he was about to be retried on six felonies including kidnapping, sodomy, forced oral copulation and two charges of rape in San Diego County Superior Court that could have sent him to prison for life if he was convicted.

In exchange for his plea, the court agreed to sentence him to between 12 and 18 years in prison for the two charges and dismiss the others.

In June, a jury found him guilty of raping a homeless woman in Encinitas, north of San Diego. Jurors also convicted him of two misdemeanors — indecent exposure and a lewd act in public — involving two other women.

But that jury failed to agree on other charges, including the alleged rape of the hitchhiker and the rape of the unconscious 17-year-old girl in 2003 when he was 19. Under the plea deal, the attack on the hitchhiker was reduced to sexual battery.

The 36-year-old former tight end — at one point one of the highest-paid in the NFL — had previously pleaded not guilty to the charges. His attorney, Gretchen von Helms, had said the sex was consensual.

Five women took the witness stand this summer, and three of them were expected to testify again.

Prosecutor Dan Owens said outside of the courtroom that the women were brave to want to testify again but that he was glad they would not have to put themselves through that again.

“The downside of any conviction would land him in prison for the rest of his life, and he made this decision based upon his family, his father, his children, and he wanted to be there for them in the future,” Carlos said.

Defense attorneys attacked the credibility of the five women and pointed out inconsistencies in their stories in the first trial.

The court had planned to allow the new jury to hear that Winslow was convicted of raping the homeless woman, who would have been among those testifying again.

Jurors would also have been told about the indecent exposure conviction, though that woman was not expected to take the stand.

Winslow was drafted with the sixth overall pick by the Browns in the 2004 NFL Draft, and spent five years with the team before being traded to the Buccaneers. He also played for New England and the New York Jets, earning more than $40 million over 10 seasons in the NFL. He is the son of Chargers Hall of Fame receiver Kellen Winslow, who was in the courtroom throughout the first trial and on Monday.

Winslow Jr. repeatedly looked back at his father before entering his plea. As he left the courtroom Monday, he reached an arm out to his father, who responded by touching his fist to his heart.

Winslow’s attorneys said he suffers from traumatic brain injury from his football playing and a motorcycle accident that ended his career.

They will argue that information should be taken into consideration at his sentencing hearing.