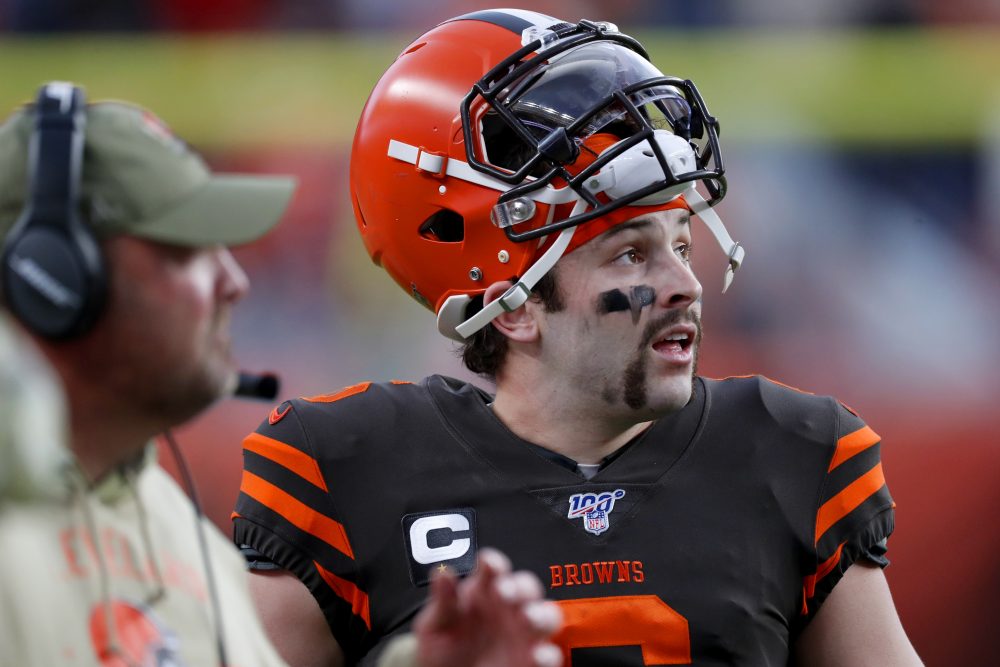 BEREA — The best quarterbacks elevate those around them.

The line looks better because he’s on time with his decisions and gets rid of the ball. The receivers make more catches because the ball is thrown to the perfect spot. The running backs have room to run because defenses are scared of the passing game.

Baker Mayfield was expected to be among the NFL’s top quarterbacks this season. He was the No. 1 draft pick in 2018 and had a record-setting rookie season.

Instead, Year 2 has been a near-constant struggle. The Browns are 2-6 and on a four-game losing streak. Mayfield is last in the league with a 58.7 completion percentage (58.7), tied for last with 12 interceptions and 31st with a 71.3 passer rating.


He’s been unable to raise the level of performance for himself and his teammates.

“I’m doing everything I can vocally, just trying to get these guys prepared, to lift them up and do my job because being a quarterback, one of the most important thing is making the guys around you better,” Mayfield said Wednesday. “But we’ve had some things that haven’t gone our way. Some self-inflicted wounds are a lot of it.

“But I have to stay the course. I have to continue to be me, push them to be better. Everybody’s focused right now. I wouldn’t say I’m going to change and stop trying to get the guys to be better around me, but more so now than ever, it has to be I’m counting on them and you can count on me to do my job, as well.”

Mayfield developed a couple of themes during the interview. He stressed the importance of staying the course, improving execution and his teammates helping him by doing the right things.

He took a lot of criticism for not throwing to receiver Odell Beckham Jr., who had a step on cornerback Chris Harris down the left sideline, on the final fourth-and-4 play Sunday in the 24-19 loss to the Broncos, but Mayfield had a different view of the play as a whole.

“You gotta have the right routes,” he said. “You gotta have exactly what we need to because it’s critical in those situations. We gotta be where we’re supposed to be.”

Analysis: Plenty of blame to go around as dysfunction resurfaces

After Mayfield stormed away from his midweek interview last week, he tweeted he was “frustrated” and his sense of urgency was at an “all time high.” Beckham came to his defense, saying he’ll always have his back and would jump into the fire with him.

“Obviously whenever he says stuff like that, that’s great to hear. To have the support of your teammates, it’s something you always want to have, but to hear it come from that genuine aspect from him means a lot,” Mayfield said. “And I think people had this picture-perfect thing that it was going to be sunshine and rainbows and he was going to have a whole lot of one-on-ones. It’s Odell Beckham. He’s going to have double coverage.

“We have to find ways to format things to get him the ball and force-feed him early on to where he can make an impact before we can have the perfect look to give him a shot play, and I think that’s something that we learned the hard way. But I think as the weeks have gone by, we’ll continue to improve on how to get the ball to him.”

Beckham caught five passes for 87 yards vs. Denver, and ranks 18th in the NFL with 575 receiving yards and 31st with 39 catches. He signaled to Mayfield from his spot wide left before the fateful fourth-and-4.

“We talked about it, but I’m looking at other stuff at that point so I didn’t see it,” Mayfield said.

Mayfield had a solid game against the Broncos, going 27-for-42 for 273 yards, a touchdown and a 90.7 rating. He didn’t throw an interception for the first time this season.

But his numbers for the season are startling. He’s been the league’s worst quarterback when not facing pressure, as his 75.1 rating is the lowest and he’s the only quarterback to throw more interceptions (10) than touchdowns (six).

“There are a lot of factors that go into that,” Kitchens said. “I do not think he is just wildly missing passes.”

A popular explanation for the offensive struggles is the lack of time spent with Beckham and other skill players as they’ve dealt with injuries and the four-week suspension of receiver Antonio Callaway to start the year.

“I wouldn’t say it’s the continuity,” Mayfield said. “That’s an easy copout, but it’s really not that.”

He preferred to talk about a lack of execution and trust.

“So that’s me letting it loose, being on time, putting it in the right place and having the communication with those guys throughout the week of, here’s where you need to be, on time, at this step, this depth, this width,” Mayfield said. “When you trust those guys to be there, I’m going to let it rip.”

He entered the league with the reputation of a gunslinger and didn’t look scared at all as a rookie. He hasn’t played with the same freedom this year, whether it’s the new offense, the interceptions, mounting pressure to win or adjustments from defenses.

“Protecting the football is the No. 1 job of the quarterback,” Kitchens said. “The No. 2 job is to continue to play fearlessly because you are never going to make those plays until you do. He does a good job of putting things behind him and moving forward. I do not think he bats an eye.”

“To be honest with you, it’s not real difficult, I can still play the way I need to,” Mayfield said.

With a notable exception. The deep shots he connected on so often last year have disappeared. The team’s in-house radio show reported only one pass Sunday traveled 20 yards in the air.

“Right now just who we are offensively, we have to take what they’re giving us,” Mayfield said. “Teams have done a pretty good job for the most part of taking away our deep shots. They’re trying to make us play patient, and that’s a good game plan for these guys coming in. They know we have a bunch of playmakers, they’re going to eliminate the big plays and try and make us play patient for four quarters.

“Yeah, we’d like (to throw downfield). But right now we have to take the short stuff until they’re really giving us those shots.”

Mayfield sported a mustache Wednesday. That may not seem like news, but social media was abuzz over the weekend when he arrived at the stadium Sunday with a beard, went to a Fu Manchu for the game, then shaved to a mustache before his post-game interview.

“The quarterbacks had a Movember mustache and the original thought was for me to do handlebars,” he said, referencing the effort to raise awareness for men’s health. “I was undefeated before Sunday with the handlebar mustache, so I shaved it off because I didn’t deserve it.”

Freddie Kitchens focused on fixing lack of execution in red zone, doesn’t want players dwelling on awful 1st half
Kareem Hunt has been counting the days and is ready for his return Sunday against the Bills