Notes: Damarious Randall returns to practice for safety-needy Browns but says he won’t rush back if he’s not healthy 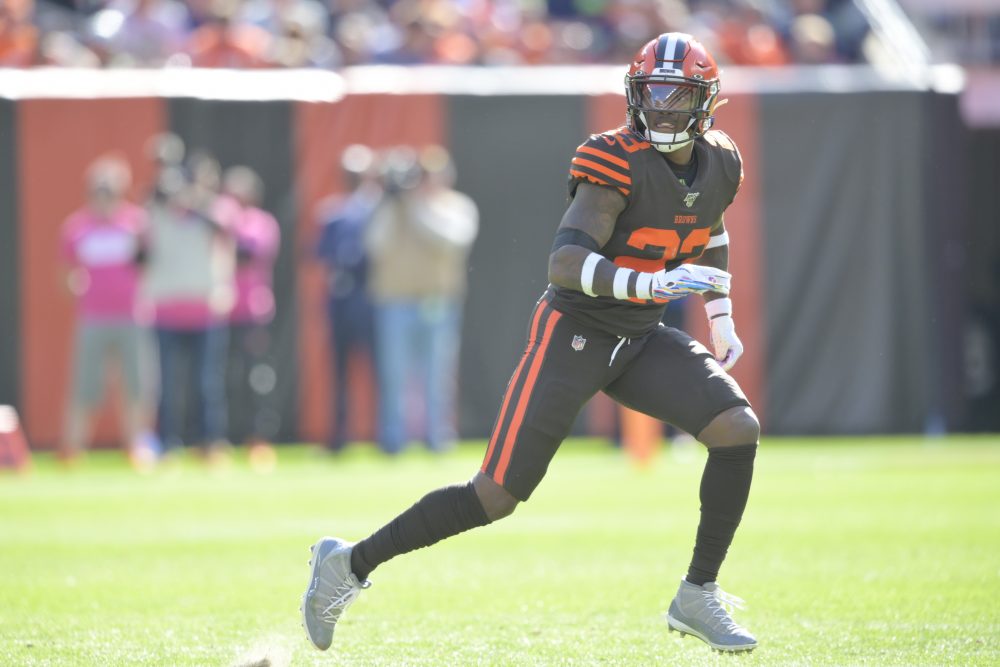 The Browns need him, but Randall won’t rush back before he’s ready.

“No. I’m listening to my body, taking it day by day,” he said after being limited in practice. “Whenever I’m good to go, I’ll definitely be out there.”

Jermaine Whitehead, who had started all eight games among the team’s three safety spots, was cut Monday after threatening social media posts Sunday night following the 24-19 loss at Denver. And Eric Murray had knee surgery last week and is expected to miss at least a couple of more games.

Morgan Burnett is the starter at strong safety. If Randall can’t play Sunday against the Bills, Juston Burris would likely start at free safety. Rookie Sheldrick Redwine and cornerback TJ Carrie would be next up, as coordinator Steve Wilks likes to use three safeties at a time.

“We still have some guys back there that we have a lot of confidence in,” coach Freddie Kitchens said. “Getting Damarious back will definitely help.”

“We’ve been overcoming adversity the whole entire year,” Randall said. “Guys been banged up, beat up, so next man up and we’re just going to keep pushing.”

Randall was hurt in the final minutes of the loss to the Seahawks on Oct. 13. He came around the edge on a run play, fell to the ground and grabbed the back of his leg.

“It is always good to be back out there with my guys,” he said. “Just happy I can move around again.”

He’s played four games — he missed Weeks 2 and 3 with a concussion — and has two sacks and three passes defensed. He’s in the final year of his contract.

“Being injured, missing games is kind of always frustrating,” he said.

Randall opened the year talking about winning the Super Bowl and remains optimistic despite the 2-6 record.

The selflessness coaches admire in running back Nick Chubb is on display with the return of Kareem Hunt this week following an eight-game suspension. Chubb isn’t worried about possibly losing playing time or touches.

“I am excited about it to get somebody else back there with me that can carry the ball and do pretty much all the things I can do,” he said. “He can catch the ball really well. He is an exciting player that can make some explosive plays, and he definitely is very special, so I am excited to be a part of it but also excited to watch.”

Chubb was part of a rotation at the University of Georgia and didn’t mind.

Kitchens said Hunt is “ready to play” and the coaching staff was still drawing up plays to use Chubb and Hunt together.

“Nick is about one thing and one thing only: winning,” Kitchens said. “Nick gives us a great opportunity to win. We are adding another chip to the puzzle to increase those chances, too.”

Vernon was hurt late Sunday and hobbled off the field. Chad Thomas, a third-round pick in 2018, would likely replace him and make his first start.

Brown missed the Broncos game, but Kitchens indicated Wednesday he was close to getting out of the league’s concussion protocol. Seals-Jones worked on the side with the athletic training staff. He left the game Sunday when he got hit on the knee.

** Left tackle Greg Robinson (ankle) was a full participant in practice after leaving the game twice.

Wyatt Teller made his first start with the Browns on Sunday, playing all 75 snaps at right guard. Kitchens said he’ll “probably” remain the starter after displacing Eric Kush, who started the first seven games.

“He was solid,” Kitchens said of Teller. “There are definitely some things in the running game he could get better at. He would be the first to admit that, but that is his first significant action since he has been with us. He will continue to get better.”

He isn’t concerned about the midseason changes at left tackle and right guard.

“These guys have done a good job of adjusting to their role and being willing to change that role at any given moment,” Kitchens said. “That makes a good offensive line. You always want continuity, but sometimes your needs change during the course of a season or during the course of a game, and these guys have that innate ability to change those and never look back.”

Randall is active on social media but said it’s not difficult for him to ignore the criticism. Something Whitehead couldn’t do

“For me, personally, no, because they’re going to talk regardless of whether you’re doing good or bad,” he said. “I just look at it as at least they’re talking about me. Because if I was a nobody, I don’t think my name would be trending on Twitter. I look at it like that and try to look at positive vibes and positive energy.

“I don’t think nobody over the Internet can cross the line for me. I just don’t personally take it that personal enough for somebody to tweet something that can get me to the point to where I’m going to be up out of character.”

“Brian does a good job,” Bills coach Sean McDermott said on a conference call. “You learn a lot over your years, and the good coaches are the ones who learn from every situation. Brian has done that. We are fortunate to have him on our staff here.”

** The Browns missed several tackles Sunday, including three on a 75-yard touchdown. They changed the practice routine, opening Wednesday by having every defensive player go through a tackling drill.

** The Bills are healthy. The only two players who didn’t practice were resting.

Notes: Freddie Kitchens looking forward to Kareem Hunt’s return this week, says he’ll “definitely” have role
Notes: Odell Beckham Jr. “can smell blood” when he gets in red zone but hasn’t been able to feast