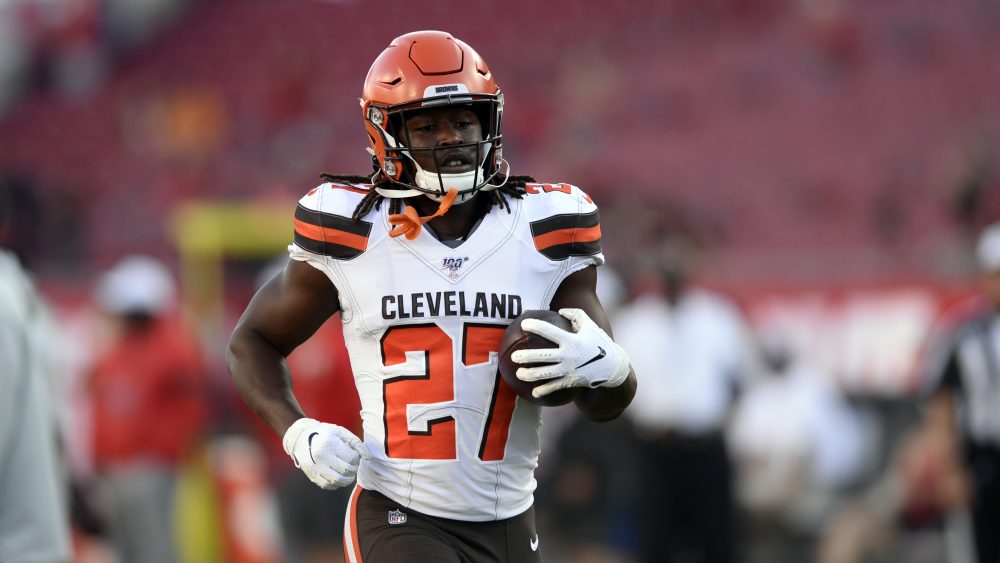 Kareem Hunt must feel like he’s late for a wake.

A classical pianist at a Whoopee Cushion convention.

Welcome aboard, Kareem! You’re just in time to abandon ship.

Say what you will about your 2019 Cleveland Browns, but what we all can say, and agree upon, is this: you can’t make this stuff up.

A team that fell in love with itself during the summer has, four months later, turned into a Nightmare on Lou Groza Blvd.

The only thing rookie head coach Freddie Kitchens has gotten right is his declaration that what he has is not a team but “a group.”

And a strange one, at that.

It’s almost like 53 independent contractors show up to the work site every Sunday, and go to work trying to build 53 different houses. There is no foreman. Blueprints? What are those?

That’s what Kareem Hunt is walking into. Competitive dysfunction. He was supposed to be the midseason shot in the arm. An electric weapon added to the team’s quiver of playmakers. For the offense, there would be no punt with Hunt. He would push the Browns offense even further above and beyond the helpless competition.

The midseason addition of Hunt, it was assumed, during our silly thinking summer, would be the icing on the cake, the final piece of the puzzle to the Browns’ championship march. Or, at least, aggressive stroll … um … cautious canter?

Instead, Hunt shows up and sees nothing but rabble and rubble, toil and trouble.

Hunt, who won the NFL’s rushing title as a rookie in 2017, is joining a team that can’t even figure out what it is, much less what it has, where it’s going or how to get there. A team that in its last game got penalized for too many men on the field when the other team was taking a knee.

A team that already has, it should be pointed out, a Pro Bowl-caliber running back that the coach sometimes takes out of games in crucial running situations, because he wants the opposing team to think the Browns are going to pass.

Perfect. With the addition of Hunt, now they have two Pro Bowl-caliber running backs they can call to the sidelines in crucial 4th-and-1 situations.

At the beginning of the year, it seemed safe to assume — again, silly us! — that by the time Hunt joined the team, the Browns would have all the kinks ironed out. That the offense would be a sleek, smooth-running scoring machine, with weapons everywhere.

The addition of Hunt would give opposing defenses one more headache to endure. One more weapon to try to defuse. One more touchdown maker to chase.

Instead, Hunt’s arrival is one more weapon to waste.

Through eight games, Kitchens’ utensils have been grossly underused and mishandled. Too many big plays, big situations come and go without one of the Browns’ big playmakers making a big play.

Hunt is a big playmaker, but he’ll have to wait his turn at the end of the playmaker line — and the line doesn’t move very fast.

Neither does the logic that is applied to the deployment of what was supposed to be a potent, touchdown machine of an offense. You know, the same offense that wobbled into the red zone five times in Denver and failed to score a touchdown in four of them.

At the start of the season the addition of Hunt at midseason seemed like it would be a case of the rich getting richer. Instead, it’s probably going to be a case of the confused getting confuseder.

The Browns are having enough trouble trying to figure out how to use what they have. It would seem that giving them more would only baffle them more.

At this point, what the Browns need most isn’t another offensive weapon, but an organizational reboot to allow them to figure out how to use the offensive weapons they already allegedly have.

Because of that, the Browns have no choice but to figure out how to use Hunt on the fly. That’s probably going to be difficult for an offense that too many times appears to be flying by the seat of its pants.

This may be a case of “more is less.” Although it would be hard for the Browns offense to look any less than it currently looks.

So who knows? Maybe with the arrival of Kareem the Browns won’t careen into the nearest ditch. Again.

What IS their biggest problem?