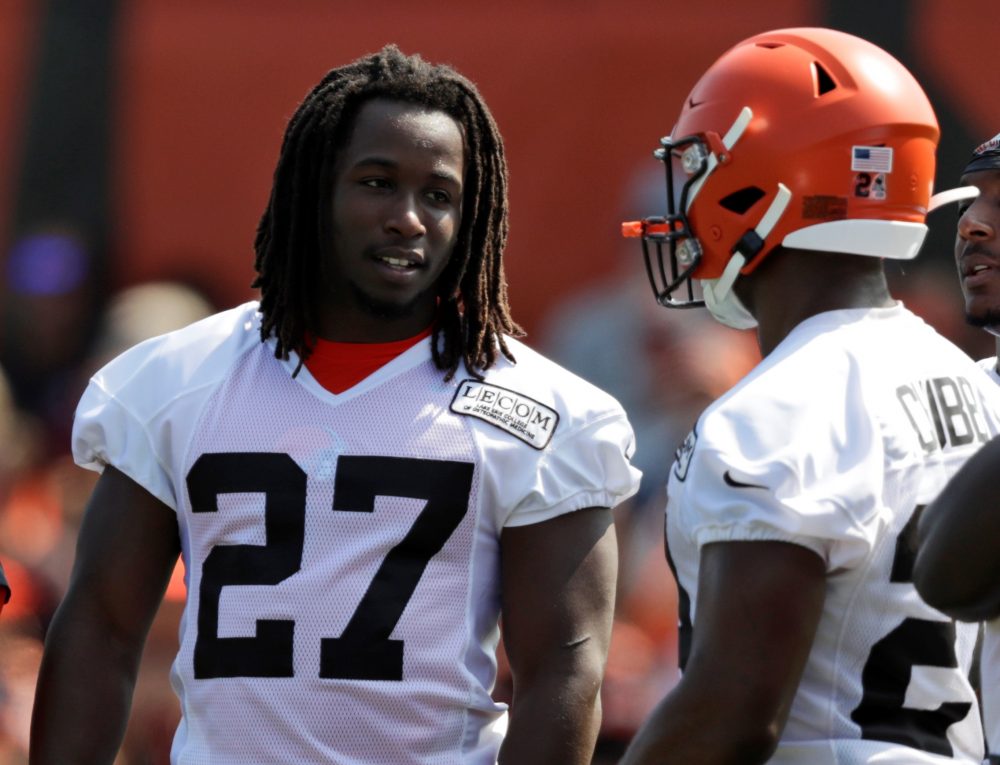 BEREA — Kareem Hunt has been counting down the days until he returns to the field Sunday.

He’s also been keeping track of how long it’s been since his career abruptly stopped.

“Like 342 days, 342 days,” he said Thursday. “A lot of mixed emotions, high and low. It’s going to be a very fun, emotional game, and I’m definitely going to be excited to get out there and do whatever I can to play the role and help this team win.”

Hunt, a Pro Bowl running back, was cut by the Kansas City Chiefs on Nov. 30 — Thursday marked 342 days since — after video surfaced of him shoving and kicking a woman in a hallway at The 9 in downtown Cleveland. His last game was Nov. 19, and he’s in line to return Sunday against the Buffalo Bills at FirstEnergy Stadium after serving an eight-game suspension to start the season.


“The first couple of weeks I wasn’t sure,” Hunt, 24, said of getting a second chance to continue his career, “but after awhile, I just prayed to God and put it in his hands and did everything I could and stayed positive and made sure I stayed in the weight room and the gym and just kept my goals ahead and looked forward.”

The Browns signed him Feb. 11, and the league announced his suspension March 15 for two off-field altercations, including the one at The 9. He practiced during the offseason but was slowed during training camp and the preseason by a groin injury and had sports hernia surgery Aug. 29.

He was allowed to return to the team facility a few weeks into the suspension and permitted to practice Oct. 21. The game against the Bills is the major milestone.

“It most definitely means a lot,” said tight end Demetrius Harris, who played with Hunt for two seasons in Kansas City. “I’m just happy for him. His rookie year, we became good friends. Just to see him on the field just happy to be back in pads and be having another opportunity, it’s a good feeling for him.”

Hunt is a native of Elyria, moved when he was a kid and went to Willoughby South High School. He’ll make his debut for the hometown team Sunday but was more focused on the occasion than the location.

“I’m just excited to be back on the football field,” he said. “I know it’s my hometown, I love ‘em to death, but it’s just going to be a little bit different touching that field and hitting somebody again.”

Receiver Odell Beckham Jr. said Hunt will be looking for contact the first time he has the ball.

“I just know he’s ready,” he said. “First play he gets the ball I don’t know if there’s going to be many juke moves. Somebody better watch out for either a stiff-arm or a shoulder or something. We’re all excited to have him back.”

Hunt declared himself 100 percent healthy following the surgery, said he’s gotten back in the groove with the extra practice time and is comfortable with the playbook. He led the league in rushing as a rookie in 2017 and said he has “no doubt” he’ll be the same player he was a year ago.

He believes he’s a different person.

“Honestly, I had a lot of time to just sit and reflect and think and just look at the big picture and make sure I just overthink and look at everything from the outside in,” Hunt said. “I’ve been able to stay on top of things like thinking before you act and not react to little things and just keeping your emotions to yourself pretty much. I feel like my emotions were very high last year and I’ve kind of settled down a little bit more.”

The Browns have been supportive of Hunt since they signed him, and coach Freddie Kitchens likes how he’s matured.

“He has gone through a lot since his last game,” he said. “As a person, he has grown. As a player, he has grown, especially in our system.”

Players across the league have been given second chances only to stumble again.

He started all 28 games he played with the Chiefs but will have a smaller role behind starter Nick Chubb, who’s fourth in the league with 803 rushing yards. The coaches designed a game plan to involve both, whether separately or on the field together.

“Nick’s a freak, man, and whenever I get the opportunity to get my name called, I’m gonna get in there and no letdown, no let-off,” Hunt said.

Chubb has seen no signs of rust with Hunt and believes the fresh set of legs will help wear down defenses. Kitchens talked about running the wishbone — he said the same thing last year and wasn’t joking — but coordinator Todd Monken said the staff has to be careful forcing Chubb and Hunt into the backfield together.

“We can’t get too far away from what we have done already up to this point,” he said.

Commentary: Hunt’s arrival might cause more confusion for Browns offense

“It just helps,” Beckham said. “You’ve got a number of playmakers around, just find ways to get them the ball. Kareem’s a guy that’s going to help, pass game, run game.”

“That can really mess up a defense,” Harris said of the running back tandem. “With them two and then when you’ve got Odell and Jarvis (Landry), you can run, pass, you can do whatever. So that should be a good mix-up for us. It’s something we haven’t had in the first eight games.”

Quarterback Baker Mayfield’s hoping for “an immediate impact” from Hunt, who brings a renewed hunger in his return.

“It means too much to me and I just really appreciate the fact that I get to go out and do this every day and it made me appreciate it even more,” he said. “Now it’s just, ‘Yeah, I get to go to work again today,’ and now it’s just a great feeling to be able to come here and train and put the grind in.”

Baker Mayfield says he’s trying to make his teammates better but needs to be able to trust them
Myles Garrett believes a run to 10-6 is possible and is ready for bigger role, to “win it my darn self”